Danuvius could walk upright on two legs and clamber through trees with all four limbs, making them the oldest-known example of upright walking in apes.

Fossils unearthed in southern Germany of a remarkable ape that lived about 11.6 million years ago may dramatically alter the understanding of the evolutionary origins of a fundamental human trait — walking upright on two legs.

Scientists on Wednesday said the ape, called Danuvius guggenmosi, combined attributes of humans — straight lower limbs adapted for bipedalism — with those of apes — long arms able to stretch out to grasp tree branches. That indicates Danuvius was able to walk upright on two legs and also use all four limbs while clambering through trees.

It is the oldest-known example of upright walking in apes.

The discovery suggests that bipedalism originated in a common ancestor of humans and the great apes — a group that includes chimpanzees, bonobos, gorillas and orangutans — that inhabited Europe rather than an ancestor from Africa, the continent where our species Homo sapiens first appeared roughly 300,000 years ago, the researchers said. 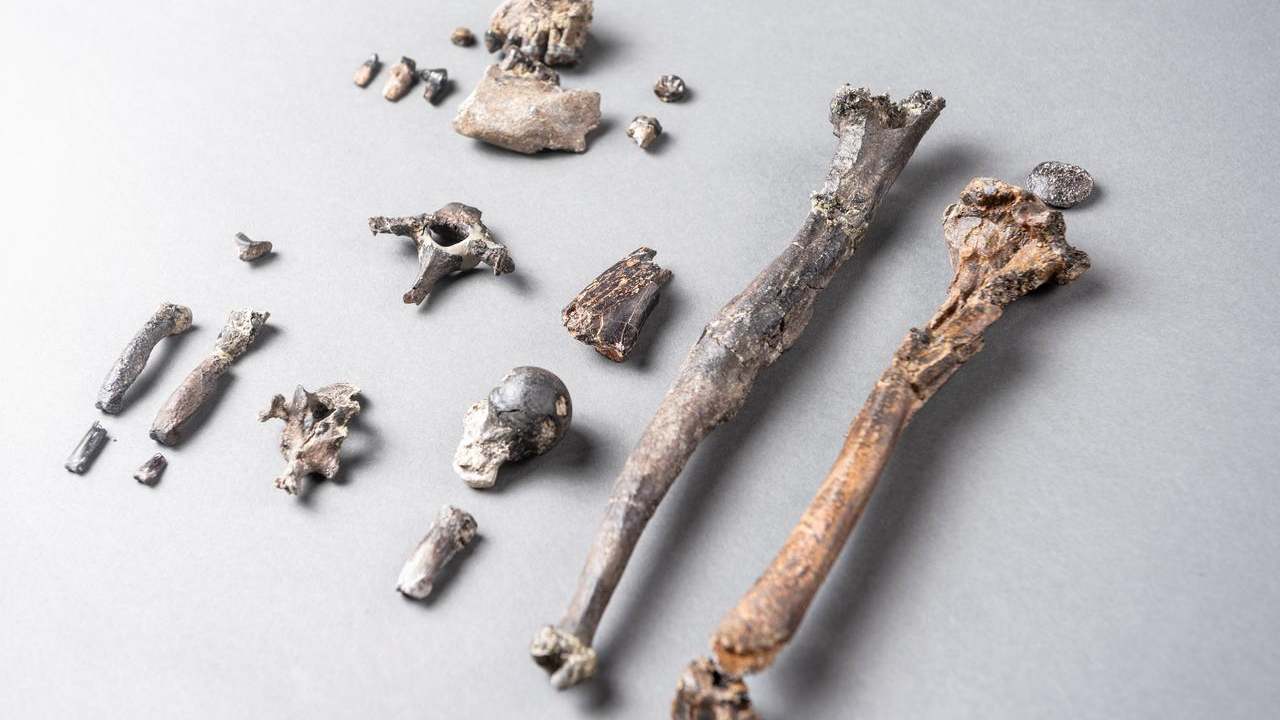 21 fossilized bones of the most complete partial skeleton of a male of the extinct ape species Danuvius guggenmosi, which lived about 12 million years ago in southern Germany. Image: Reuters

Until now, the oldest fossil evidence of bipedalism in humankind’s evolutionary tree dated to about 6 million years ago: fossils from Kenya of an extinct member of the human lineage called Orrorin tugenensis as well as footprints on the Mediterranean island of Crete. If Danuvius turns out to be ancestral to humans, that would mean that some of its descendants at some point made their way to Africa.

"Danuvius changes the why, when and where of evolution of bipedality dramatically,” said paleoanthropologist Madelaine Böhme of the University of Tübingen in Germany, who led the research published in the journal Nature.

The discovery of Danuvius may shatter the prevailing notion of how bipedalism evolved: that perhaps 6 million years ago in East Africa a chimpanzee-like ancestor started to walk on two legs after environmental changes created open landscapes and savannahs where forests once dominated.

“This paradigm is now declining — or, in other words, is shown by us to be wrong,” Böhme said. An illustration of Danuvius guggenmosi, supporting itself with both its forelimbs and hindlimbs. Image: Velizar Simeonovski

Danuvius indicates that upright walking originated in the trees, not on the ground, and that humankind’s last common ancestor with apes did not go through a stage of hunched knuckle-walking, as previously thought, Böhme added.

"Our last common ancestor with great apes doesn't look like a chimp, or any living great ape. He may have looked like Danuvius," Böhme said.

Danuvius was smaller than today’s great apes, though males were close in size to male chimpanzees and bonobos — perhaps 65 pounds (30 kg) — while females were smaller, perhaps 45 pounds (20 kg). Danuvius was just over 3 feet (1 meter) tall. Danuvius lived in what was then a hot climate on a flat landscape with forests and meandering rivers.

The emerging picture of its locomotion differs from any known living creature, Böhme said, describing it as “extended limb clambering," with Danuvius walking on two legs while using its long arms for support and balance but not for pulling up the body as other apes do.

Fossils of at least four Danuvius individuals were found in the Allgäu region of Bavaria, including many key elements but no complete skull. The completely preserved limb bones, vertebra, finger and toe bones enabled the researchers to reconstruct the way the creature moved about in its environment. They also were able to study functionally important joints including the elbow, wrist, hip, knee and ankle. About 20 percent of the skeleton was accounted for.

Fresh clues to life and times of Denisovans, a little-known band of ancient humans