The discovery was made possible by a massive telescope, a Boeing 747 & a team of astronomers.

When the Universe came to exist, 13.8 billion years ago, space was a sea of undifferentiated, simple, one-atom elements. Molecules were the odd ones out. Stars wouldn't be formed for another 100 million years back then.

But 100,000 years after the Big Bang that created the universe, the first molecules emerged. It was a marriage of some involving the lightest elements in space at the time — helium and hydrogen. And the very first molecule in the universe, known as a helium hydride ion (or simply HeH+), was formed. Now, scientists have detected HeH+ in space for the first time.

"It was the beginning of chemistry," David Neufeld, co-author of the study from John Hopkins University told AFP. "The formation of HeH+ was the first step on a path of increasing complexity in the Universe," he added.

This molecule was also the foundation for a parade of other increasingly complex and heavy molecules that later formed. Then came single-celled life and multicellular life on Earth around 3.5 billion years ago. Despite the massive role HeH+ played in the universe, scientists have been restricted to studying versions of this primordial molecule in laboratories for nearly a century (since 1925). It has never been detected in its natural setting — until now.

"The lack of definitive evidence of its very existence in interstellar space has been a dilemma for astronomy for a long time," Rolf Gusten, lead author from the Max Planck Institute for Radioastronomy in Bonn, told AFP. This ultraviolet image is of the planetary nebula NGC 7293, also known as the Helix Nebula. Image credit: NASA/JPL

But this time around, astrophysicists knew exactly where to look for it. Models of HeH+ from the 70s pointed to significant quantities of the molecule in glowing gas clouds thrown out by dying stars like our Sun. At this stage of a star's life, its conditions (in terms of temperature and the elements it contains) resemble that of the early Universe.

The real challenge in spotting them wasn't to do with the molecule's abundance or technological capabilities, it was the Earth's own atmosphere. Protective of us as it is, the water vapour and density of gases in the atmosphere cuts out the range of electromagnetic waves that HeH+ gives out, in the far-infrared wavelength. Effectively, HeH+ was undetectable from the ground.

NASA joined forces with the German Aerospace Center to overcome this challenge with an airborne observatory. The results? The Stratospheric Observatory for Infrared Astronomy, or SOFIA, which could make observations from a cruising altitude of ~14,000 metres. 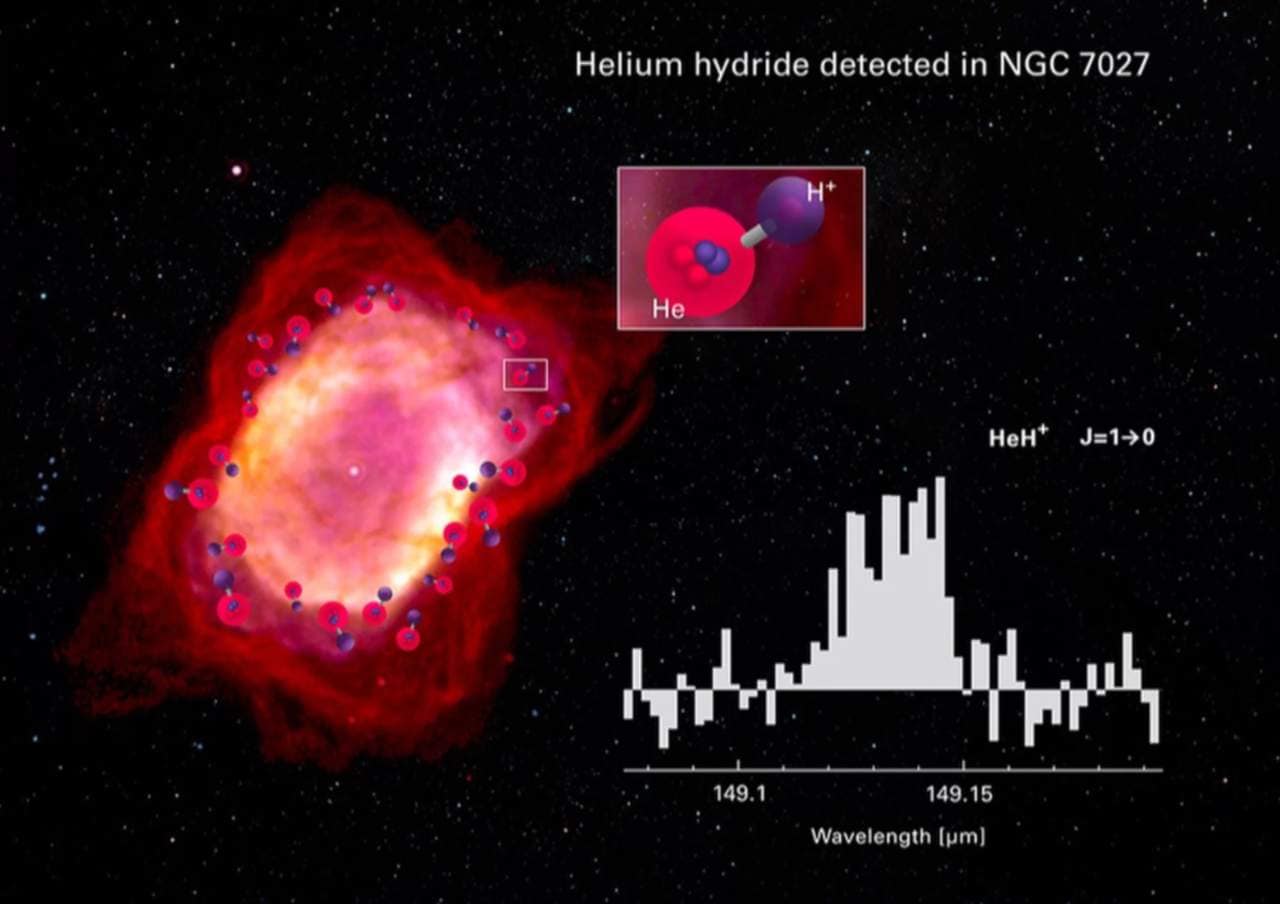 The researchers detected infrared lines emitted by HeH+ molecules in the planetary nebula NGC 7027, a hot, compact nebula about 3,000 light-years away from Earth. Image credit: William B. Latter and Rolf Güsten and NASA/ESA

This allowed researchers to avoid 85 percent of the "noise" from the atmosphere picked up by ground-based telescopes when making observations in the distant universe. SOFIA is a massive 2.7-metre telescope, an infrared spectrometer, and a Boeing 747 — with a window-like square cut away from its fuselage, from which the instruments peek out.

From three flights in May 2016, researchers found molecular evidence for HeH+ in the planetary nebula NGC 7027, 3,000 light-years away.

The researchers published their findings Wednesday in Nature after a multi-decade search to catch a glimpse of the universe's oldest molecule.