The efficiency of star formation wasn't uniform, but rapid in some regions and less-so in others.

In a first, astronomers have observed molecular clouds in a massive, star-forming region at the edge of the Milky Way.

Molecular clouds, also known as stellar nurseries, are regions dense with clouds of dust and gas that encourage star formation. These are tricky regions to observe with an optical telescope since the thick cloud blocks light from escaping it. Instead, scientists choose high-resolution infrared or radio telescopes to study these systems.

"This region has been very poorly mapped," Charles Kerton, a physicist and astronomer at Iowa State University and co-author of the study, said in a statement. The stellar nursery in question is "CTB 102", roughly 14,000 light-years from the Earth. It is what astronomers call an 'H-II' region — a star-forming cloud rich with charged, ionised atoms of hydrogen. Hydrogen is the single most-rapidly produced molecule in these clouds, and its high concentrations in these molecular clouds set them apart from other interstellar regions, which are richer in other ionised gases like helium, carbon, oxygen or nitrogen. A combination of its distance from the Earth and dust and gas in that gets in the way, CTB 102 has been rather difficult to study.

A newly-commissioned radio telescope at the Taeduk Radio Astronomy Observatory, South Korea was used to capture the high-resolution observations of these clouds. The images were later compared with existing infrared data from NASA's Wide-ﬁeld Infrared Survey Explorer and the Two Micron All Sky Survey. The infrared data allowed them to classify young stars forming within the region’s molecular clouds.

"It tells us the mass and structure of the material in the interstellar medium there," Kerton said. 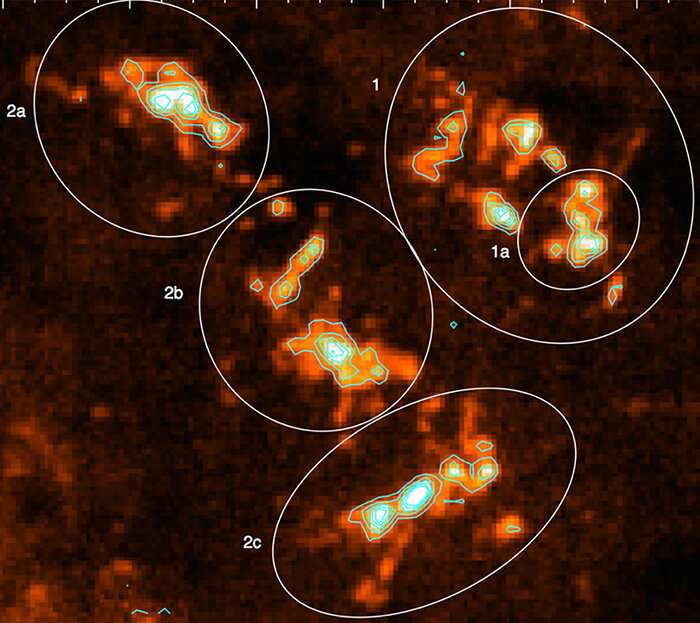 The ovals in the image are the major regions inside the molecular cloud, including the smaller 1a, which is very efficient at producing stars. Image credit: Charles K

The team of scientists reported that the efficiency of star formation wasn't uniform, but rather, rapidly in some parts and less so in others. They found some subregions with efficiencies much higher than expected for its size, which they think could be sites of dense clusters of young and developing stars within the cloud.

Why all the star formation is compacted into a single subregion is something the team intends to further study. Kerton speculated that it could be something special in the interstellar material in the subregion that creates it.

The astronomers describe their first draft of a new, higher-resolution map for the region in a paper recently accepted for publication in the Astrophysical Journal.

Light and dust play a crucial role in the formation of life in galaxies: Study