Extinction Rebellion activists want you to give up on us, or fight climate change

The movement believes our appetites & footprint has accelerated a mass extinction — including our own.

The Extinction Rebellion, a network of climate activists who use civil disobedience to spotlight inaction on global warming, is rooted in the conviction that humanity has dug its own grave and has one foot dangling over the edge.

The fledging movement's growing ranks, already spread across several dozen countries, believe that homo sapiens — perhaps not so "wise" after all — is doomed to terrible suffering, or worse.

A clear-eyed reading of science, they say, reveals that our appetites and ecological footprint have tipped Earth into a rare period of mass extinction from which humans are not exempt.

They see claims to the contrary as tantamount to climate denial.

"It is really about waking people up to the fact that this is an emergency situation," said Sara Arnold, a 32-year designer and entrepreneur who has helped to lead campaigns in Britain, including one Sunday disrupting traffic around London Fashion Week.

"We want people to start to digest the reality of climate change."

The sister Sunrise Movement in the United States, which champions the ambitious Green New Deal put forward by progressives in Congress, also calls for a WWII-scale response.

Whether it's time to panic about the threat of runaway global warming may depend less on Earth systems than human ones.

Climate scientists overwhelmingly agree that loading the atmosphere with greenhouse gases at current rates will eventually lead to an unliveable hothouse planet.

Where they disagree is on society's willingness to curb that carbon pollution, the effectiveness of the tools available to do so, and our capacity to adapt to changes already in the pipeline.

"People imagine that we'll find a solution in the future, that we still have time," Doug McAdam, a professor of sociology at Stanford University, told AFP. "A lot of people don't see it as the crisis it so clearly is."

Getting real, in other words, about the impact of deadly heatwaves, flooding and superstorms made worse by rising seas also means not overestimating humanity's ability to confront and stem the tide.

Assurances from governments, think tanks and NGOs that the crisis is manageable and a solution within reach are rejected as false hope based on wishful thinking or lies.

"Our first demand to government is that they tell the truth about the ecological emergency we're facing," said Liam Geary Baulch, one of the Extinction Rebellion activists who — in their first public action last October — lay down in rush-hour traffic outside Parliament and glued themselves to the entrance of government offices. 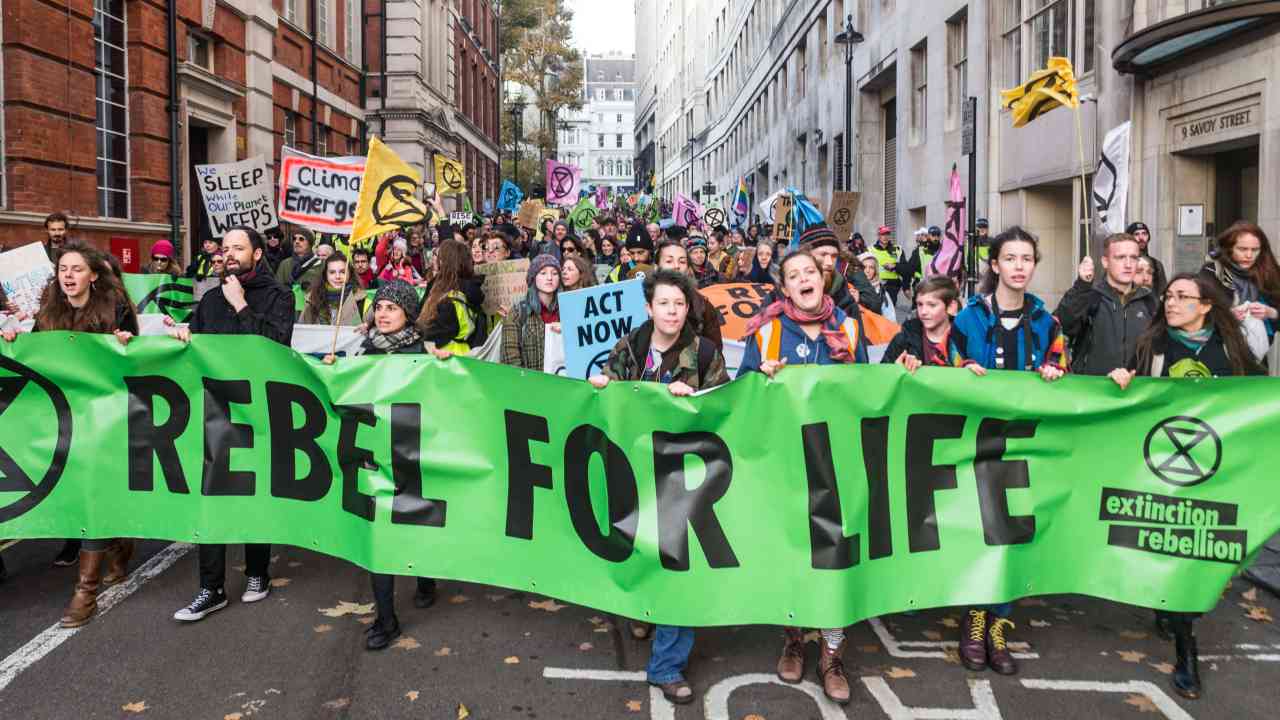 "We sleep while our planet weeps." Image credit: Extinction Rebellion/ActivateUS.org

Why has this new wave of climate militants emerged now?

One reason is impatience: despite much high-level hand-wringing and 24 UN climate conferences, the problem continues to outstrip efforts to rein it in.

"On climate change, we have to acknowledge that we have failed," 16-year old Greta Thunberg, a kindred spirit from Sweden who has inspired highschool strikes in half-a-dozen countries, told the global ruling class at Davos last month.

"We have had 30 years of pep talks and selling positive ideas. I’m sorry, but it doesn’t work," she added. "If it did, emissions would have gone down by now. They haven't."

Science, meanwhile, has delivered a steady drumbeat of bad news: The most common refrain in climate science has long been "worse than previously thought".

Not coincidentally, Extinction Rebellion emerged in the wake of a massive UN report warning that only a rapid, wholesale transformation of society and the global economy will stave off climate catastrophe.

These mostly young activists differ from others pushing for rapid and deep change in at least three crucial ways, they say.

To start, they reject what they see as the false optimism of mainstream climate action groups.

The right to rebel

"Adults keep saying, 'We owe it to young people to give them hope'," Thunberg said at the Davos power gathering.

For the Extinction Rebellion, that means allowing oneself to be emotionally overwhelmed by the bleak tidings from science, the second key difference.

Received wisdom says that a deep dive into climate gloom only makes people throw up their hands in despair — which is why grim UN and NGO reports are often leavened with hopeful messages that ring hollow.

"We need to grieve about the lives that have already been lost due to climate change, human or otherwise," said Baulch.

"Grieving" is the gateway to the "XR" worldview, and once that psychological threshold is crossed there's no turning back.

"Today, I see pretty much everything through the lens of climate change," said Arnold, who admits to having second thoughts about her fashion rental business.

"There is no point in sharing clothes if we are all going to go extinct."

Finally, there is the willingness to put oneself in harm's way in the tradition of the major civil disobedience campaigns of the 20th century.

"Rebellion is justified once the establishment fails," Gail Bradbrook, a scientist and Extinction Rebellion founder says in the hour-long lecture delivered hundreds of time over the last six months in community centres, churches and universities across Britain.

"When a government fails to protect the lives and livelihoods of its citizens — as in the case of climate change — the people have the right to rebel."