"Wouldn't worry about this particular one, but a big rock will hit Earth eventually & we currently have no defence."

That's what SpaceX and Tesla CEO Elon Musk makes of a 'colossal God of Chaos' asteroid that NASA has deemed 'potentially-hazardous' to Earth, and a hypothetical 'big rock' that might hit Earth and end humanity in one fell swoop.

This particular monster asteroid that Musk refers to is Apophis, named after the Egyptian God of Chaos. It is expected to come as close as ~31,000 kilometres to the surface. This close encounter, NASA predicts, will take place on 13 April 2029, when a light speck will appear in the sky, growing brighter and faster as it streaks across. For some perspective, Apophis will travel the width of the Full Moon in a minute, getting as bright as the stars as it streaks across the sky. The 1,100-foot-wide near-Earth asteroid will likely cruise harmlessly past Earth.

Great name! Wouldn’t worry about this particular one, but a big rock will hit Earth eventually & we currently have no defense. https://t.co/XhY8uoNNax 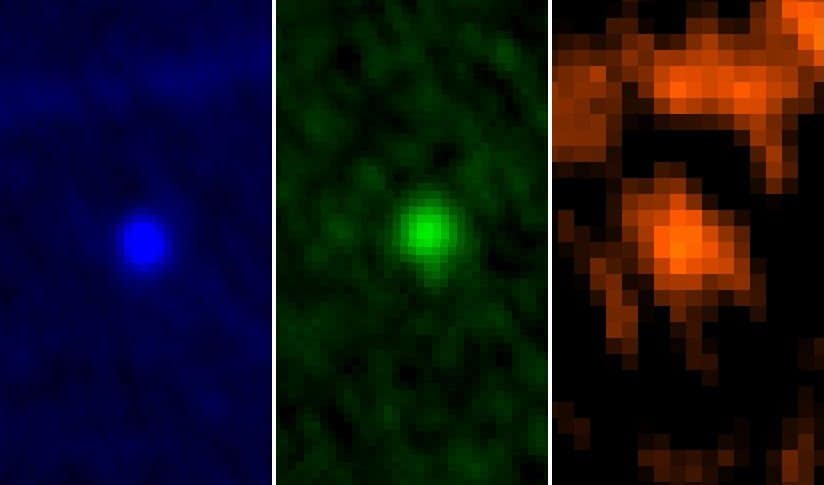 The Herschel Space Observatory operated by ESA captured asteroid Apophis in its field of view during the approach to Earth on 5-6 January 2013. This image shows the asteroid as seen through Herschel's cameras in three different wavelengths. image: ESA

Asteroids the size of Apophis are far fewer in number and rarely pass this close to Earth. While they attract a whole lot of "doomsday" attention, they are also rare opportunities that come knocking on scientists' doors — an opportunity to study its surface and other details that could help in planetary defence.

"[sic]The Apophis close approach in 2029 will be an incredible opportunity for science," Marina Brozovic, a radar scientist at NASA's JPL who works on radar observations of near-Earth objects (NEOs), said in a statement. "We'll observe the asteroid with both optical and radar telescopes. With radar observations, we might be able to see surface details that are only a few meters in size," she added.

"Current calculations show that Apophis still has a small chance of impacting Earth, less than 1 in 100,000 many decades from now, but future measurements of its position can be expected to rule out any possible impacts," NASA recently stated.

Apophis is one of ~2,000 currently-known Potentially Hazardous Asteroids (PHAs). So, Musk's reference to the "big rock" that will end us also left many clueless and wondering about humanity's fate.

NASA, on its website, offers a standard response in response to all threats from near-Earth asteroids, "No known asteroid poses a significant risk of impact with Earth over the next 100 years."

The space agency also has a designated department, the Center for NEO Studies, that monitors and addresses undetected asteroids and their orbits to find out exactly what path an asteroid will take up to hundreds of years into the future. NASA's Planetary Defense Coordination Office has also been busy at work analysing possible ways to deflect an asteroid threat in the future. If an undetected asteroid slips through, or 'Oumuamua's twin comes back from us from the great abyss, the impact may very well end us.

Perhaps Elon Musk's brilliance and hero complex will save the day before NASA's Planetary Defense? For now, we'll just have to wait and watch.