Scientists can identify areas emitting ozone harmful substances but the industries need to be identified as well.

A mysterious rebound in the emissions of ozone-depleting chemicals – despite a global ban stretching back almost a decade – has been traced to eastern China.

Research published by an international team today in Nature used a global network of monitoring stations to pinpoint the source of the rogue emissions. According to these data, 40-60 percent of the increase in emissions seen since 2013 is due to possibly illegal industrial activity in the Chinese provinces of Shandong and Hebei.

Chlorofluorocarbon-11 (CFC-11) is a powerful ozone-depleting chemical that plays a major role in the appearance, each spring, of the ozone “hole” over Antarctica. 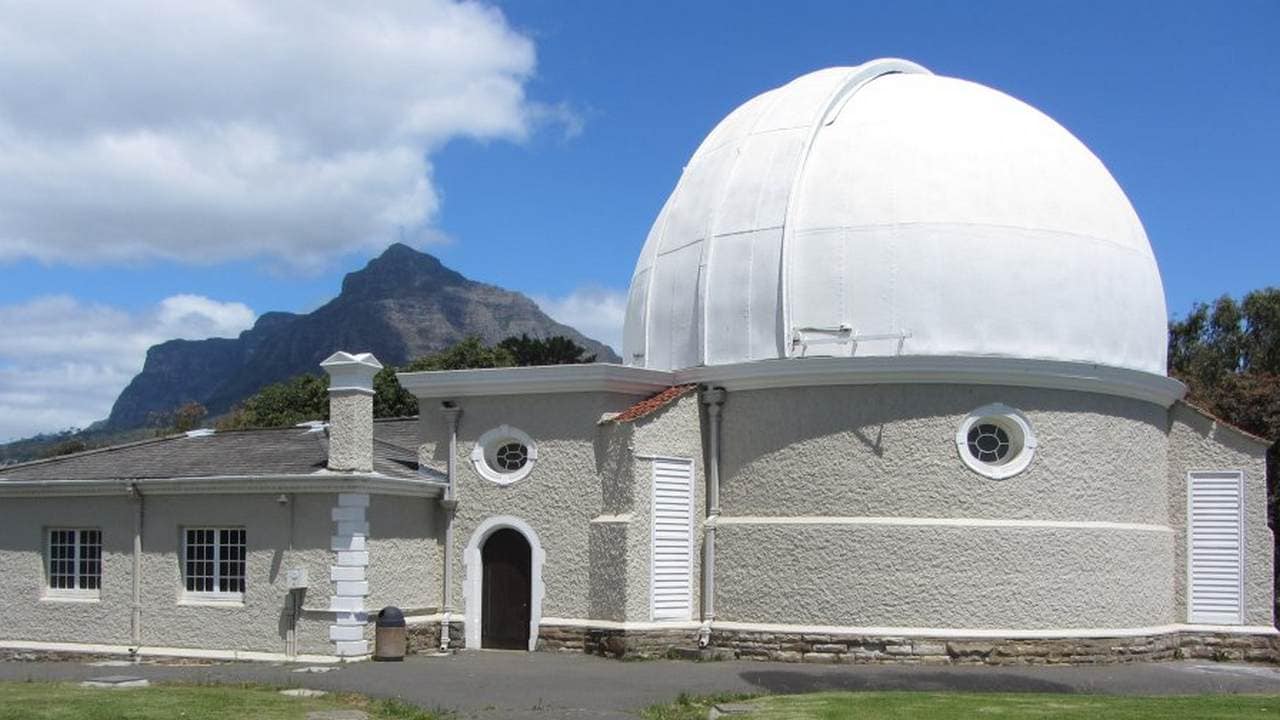 In the past, CFC-11 had been used primarily as a propellant in aerosol products and as a foam plastic blowing agent. The production and consumption (use) of CFC-11 are controlled by the global Montreal Protocol. CFC-11 consumption has been banned in developed countries since 1996, and worldwide since 2010.

This has resulted in a significant decline of CFC-11 in the atmosphere. Long-term CFC-11 measurements at Cape Grim, Tasmania, show the amount in the atmosphere peaked in 1994, and fell 14 percent by 2018.

However, this decline has not been as rapid as expected under the global zero production and consumption mandated by the Montreal Protocol since 2010. A 2014 study was the first to deduce that global emissions of CFC-11 stopped declining in 2002. In 2015, CSIRO scientists advised the Australian government, based on measurements compiled by the Advanced Global Atmospheric Gases Experiment (AGAGE), which includes those from Cape Grim, that emissions had risen significantly since 2011. The cause of this rebound in CFC-11 emissions was a mystery.

An initial explanation came in 2018, when researchers led by Stephen Montzka of the US National Oceanic and Atmospheric Administration analysed the CFC-11 data collected weekly at Mauna Loa, Hawaii. They deduced that the increased emissions originated largely from East Asia – likely as a result of new, illegal production. 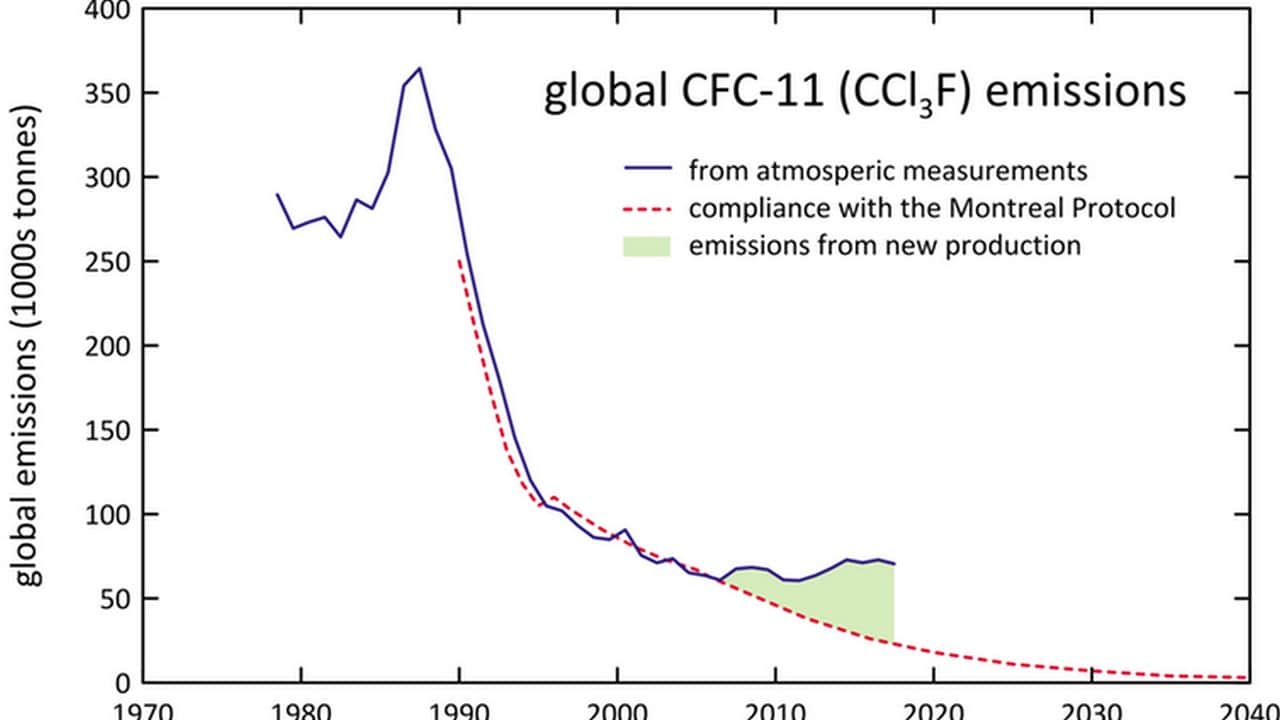 Global CFC-11 emissions based on atmospheric measurements compared with the expected decline of this compound in the atmosphere if compliance with the Montreal Protocol was adhered to. Image credit: CSIRO/AGAGE

Montzka’s team concluded that if these increased CFC-11 emissions continued, the closure of the Antarctic ozone hole could be delayed, possibly for decades. This was a remarkable piece of detective work, considering that Mauna Loa is more than 8,000km from East Asia.

A still more detailed explanation is published today in the journal Nature by an international research team led by Matt Rigby of the University of Bristol, UK, and Sunyoung Park of Kyungpook National University, South Korea, together with colleagues from Japan, the United States, Australia and Switzerland. The new study uses data collected every two hours by the AGAGE global monitoring network, including data from Gosan, South Korea, and from an AGAGE-affiliated station at Hateruma, Japan. Crucially, Gosan and Hateruma are just 1,000km and 2,000km, respectively, from the suspected epicentre of CFC-11 emissions in East Asia.

The Korean and Japanese data show that these new emissions of CFC-11 do indeed come from eastern China – in particular, the provinces of Shandong and Hebei – and that they have increased by around 7,000 tonnes per year since 2013.

Meanwhile, the rest of the AGAGE network has detected no evidence of increasing CFC-11 emissions elsewhere around the world, including in North America, Europe, Japan, Korea or Australia. Map showing the region where the increased CFC-11 emissions came from, based on atmospheric measurements and modelling. Image credit: University of Bristol/CSIRO

Yet while this new study has accounted for roughly half of the recent global emissions rise, it is possible that smaller increases have also taken place in other countries, or even in other parts of China, not covered by the AGAGE network. There are large swathes of the globe for which we have very little detailed information on CFC emissions.

Nevertheless, this study represents an important milestone in atmospheric scientists’ ability to tell which regions are emitting ozone-depleting substances and in what quantities. It is now vital we find out which industries are responsible for these new emissions.

If the emissions are due to the manufacture and use of products such as foams, it is possible that, so far, we have seen in the atmosphere only a fraction of the total amount of CFC-11 that was produced illegally. The remainder could be locked up in buildings and chillers, and will ultimately be released to the atmosphere over the coming decades.

While our new study cannot determine which industry or industries are responsible, it does provide strong evidence that substantial new emissions of CFC-11 have occurred from China. Chinese authorities have identified, and closed down, some illegal production facilities over the past several years.

This study highlights the importance of undertaking long-term measurements of trace gases like CFC-11 to verify that international treaties and protocols are working. It also identifies shortcomings in the global networks for detecting regional emissions of ozone-depleting substances. This should encourage the expansion of these vital measurement networks which would lead to a capability of more rapid identification of future emission transgressions.