'Domestication' can be traced back to an animal's genes, a 60-year study reveals

A six-decade-long breeding study with foxes has led to the discovery of genes that favour tame or aggressive behaviour, scientists said on 6 August, 2018.

Comparing the sequenced genomes of foxes selected across 50 generations for their friendliness towards people with another group bred for hostility uncovered dozens of telltale differences, including one gene in particular, they reported in the journal Nature Ecology & Evolution.

"We were able to show that a specific gene" — known as SorCS1 — "does have an effect on behaviour, making foxes more tame," lead author Anna Kukekova from the University of Illinois, told AFP.

"That's a big result — it's hard to make that connection," she said.

The findings are also relevant to human behaviour.

Some of the genetic regions identified, for example, correspond to autism and bipolar disorders, while others are associated with William-Beuren syndrome, which causes pathologically outgoing, friendly behaviour.

The backstory to the fox study begins more than half a century ago, when the origins of animal domestication were poorly understood and hotly contested.

In 1959, Russian biologist Dmitri Belyaev decided to test his theory that genes played a more important role than human interaction in the gradual metamorphosis of wolves into the man's-best-friend subspecies we call dogs. At the same time, Nobel laureate Konrad Lorenz, a pioneer in the study of aggression in animals and humans, argued that new-born wolf puppies raised with tender loving human care would become docile and domesticated.

Belyaev suspected otherwise, and choose Vulpes vulpes — a.k.a. the red or silver fox — to make his case. 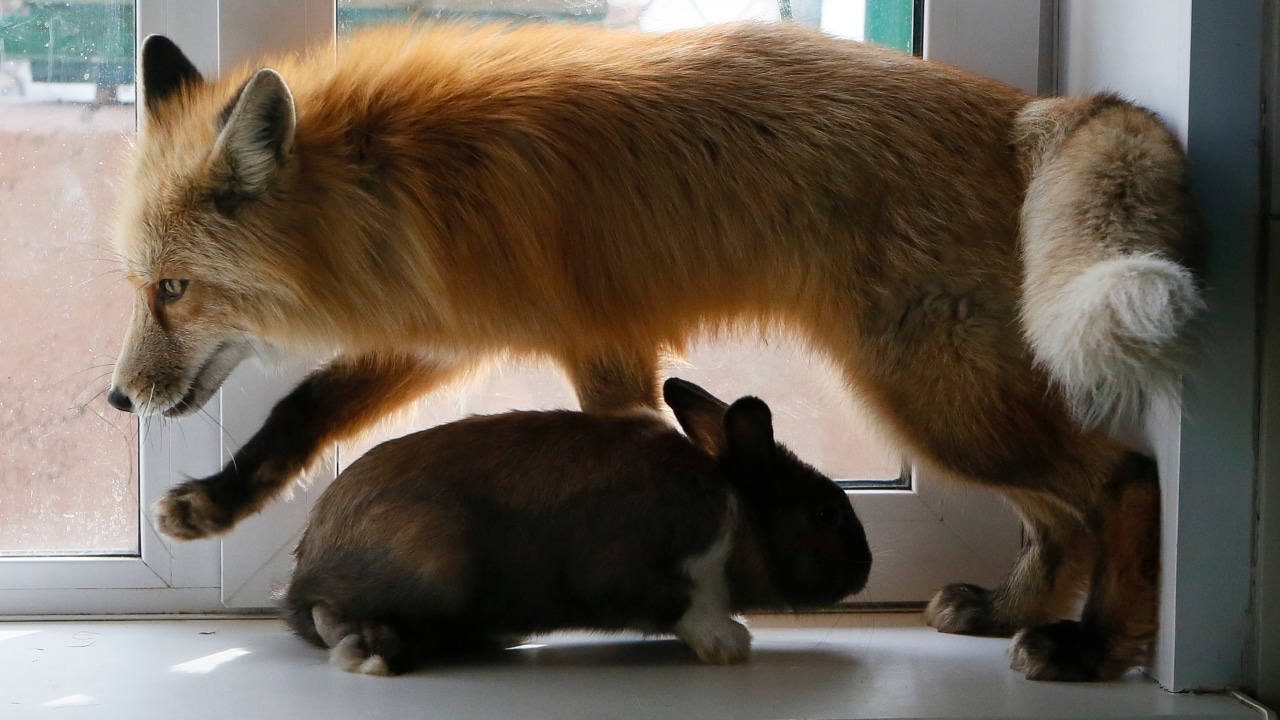 Ralf, a young red fox, next to a rabbit after a training session in the study. Ralf was born at the Institute of Cytology and Genetics (ICG) in Novosibirsk, Russia, which studies fox domestication through long-term selection and breeding. Reuters

Russia was full of fox farms which raised and harvested the animals for their fur, offering the perfect opportunity for a large-scale experiment, he reasoned.

"Farm-bred foxes were not domesticated," said Kukekova, an evolutionary geneticist who began studying the animals 16 years ago. "If you try to touch them, they show fear and aggression," much as in the wild.

Belyaev found a large farm willing to cooperate, and began to systematically select foxes that exhibited the least stress and fear around people, repeating the process with each new generation.

"After only 10 generations, they got a few puppies that wagged their tail just like dogs when they saw people, even when there was no food," Kukekova said. "They were just happy to see humans."

Today, all of the 500 breeding pairs in the tame group are at ease in the presence of humans, even if they are not as domesticated as dogs.

Around 1970, Belyaev's team at the Russian Institute of Cytology and Genetics added a group of foxes, selected for their aggressiveness, and a third control group with a random mix. For the new study, Kukekova and two dozen colleagues sequenced the genomes of 10 foxes from each of the three groups.

"The game changer for us was the development of next-generation sequencing technology," she said.

Earlier genetic sweeps yielded chunks of code with dozens or hundreds of genes, making it impossible to isolate those that mattered.

Significantly, more than 60 percent of the tame animals — including those in the control group — shared the same variant of SorCS1.

Among the aggressive foxes, that variant was entirely absent. The study also revealed that different genes are responsible for very specific behaviours.

"For example, when foxes greet people by wagging their tail, it seems to be determined by different genes than those responsible for allowing a human to touch a fox's belly," Kukekova said.

And whether a fox wants to prolong an interaction with a human is governed by yet another bit of genetic code.