DNA tests on smuggled elephant tusks have identified three major ivory cartels in Africa and are helping investigators bolster the criminal cases against some of the most dangerous traffickers, researchers said Wednesday, 19 September.

Around 40,000 African elephants are killed every year for their tusks, which are illegally traded as part of a multi-billion dollar industry that extends from Africa to Asia and beyond.

Traffickers conceal their ivory in shipping containers — but inspectors peer inside just one percent of the one billion containers sent around the world each year.

Where physical inspections fall short, genetic testing has come to the rescue, said the report in the journal Science Advances.

Lead author Samuel Wasser, a professor of biology at the University of Washington, said an "important breakthrough" came when experts realized about half of the tusks were not in pairs. Often, one was missing.

They found 26 of the 38 matched a tusk seized at a different time. 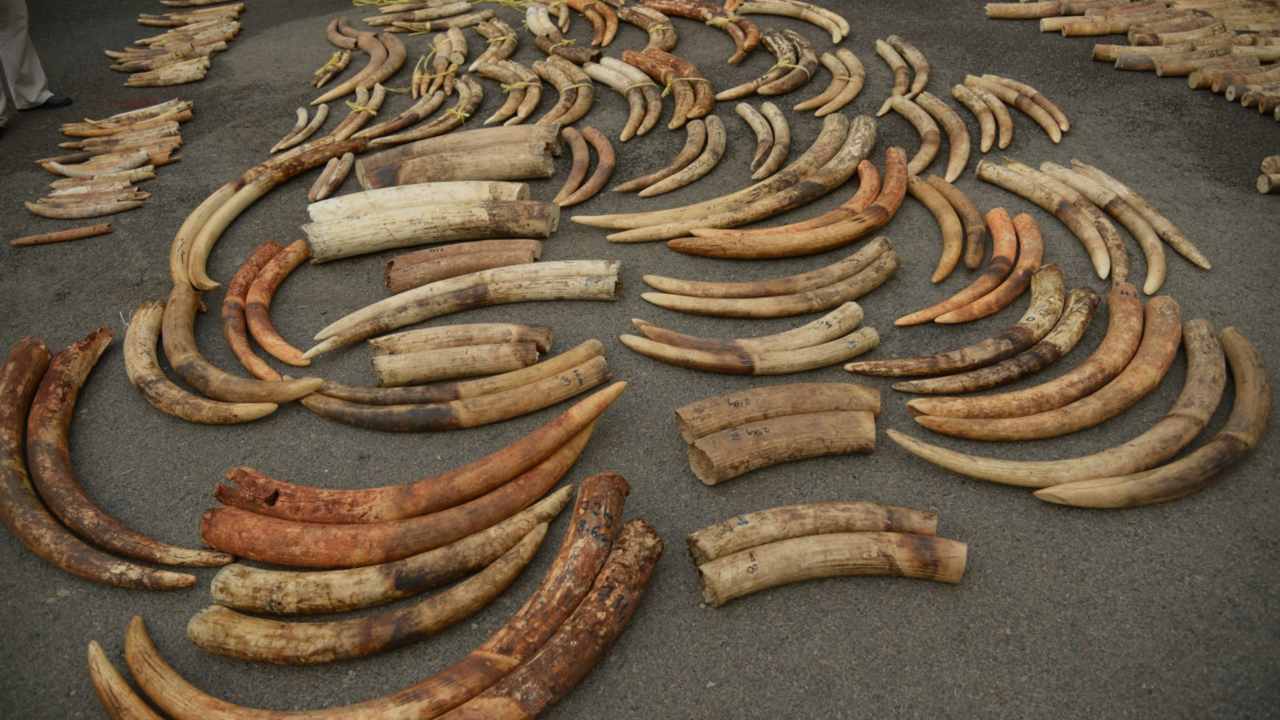 Tusks from a seizure of illegal ivory in 2015 in Singapore after being paired based on a process of sorting devised by Wasser and his team. Image Credit: University of Washington

They also discovered that two shipments with matching tusks would frequently pass through the same port, usually within 10 months of each other.

"This suggests the same major cartel was responsible for both shipments," Wasser told reporters on a conference call.

"We were able to identify what we believe are the three major cartels shipping tusks out of Africa."

They operate out of Mombasa, Kenya; Entebbe, Uganda; and Lome, Togo, according to Wasser.

Since most ivory traffickers face prosecution for a single seizure, being able to connect individual traffickers to multiple large seizures can raise the stakes, allowing them to be charged with major transnational crimes and face tougher penalties.

Wasser said his team's research has been able to link far more ivory to certain criminals.

Chief among them is ivory "kingpin" Feisal Mohamed Ali, a Kenyan national who had his 20-year jail term overturned earlier this year by a judge who cited  "gaps" in the evidence against him.

Ali was arrested in Tanzania in 2014 in connection with two tons of ivory — 228 whole tusks and 74 pieces — found in a Mombasa warehouse. Authorities put the value of the ivory at $4.2 million.

His case has been referred to a lower court, said Wasser.

"There is a great deal of evidence we have uncovered – as have others — that link him to multiple seizures," Wasser said.

"Our hope is that the data presented in this paper will help strengthen the case against this cartel."

Wasser said DNA analysis from his lab was "instrumental" in the conviction of another ivory smuggler, Emile N'Bouke, nicknamed "The Boss" (Le Patron), allegedly the largest ivory trafficker in west Africa.

In 2014 he was handed the maximum sentence under the law in Togo for possessing 1,500 pounds (700 kilograms) of ivory — two years in jail.

Since then, more DNA analysis has linked N'Bouke to other criminal syndicates in Africa, Wasser said.

"We had not yet developed the links between all these different seizures," Wasser said.

"This is a case where we wish we had this data sooner," he said, adding that "eyes are still on him."

John Brown, special agent in the US Department of Homeland Security and country representative for HSI Nairobi, said the DNA analysis has been "important" in the pursuit of multiple ongoing investigations, though he declined to go into further detail.

Smugglers and poachers are "very well organized" and "can be violent," Brown said.

Trade in ivory was banned in 1989 under the Convention on International Trade in Endangered Species of Wild Fauna and Flora (CITES).

Smugglers often try to evade detection by shipping ivory out of a different country than where it was poached.

Wasser said that even though most of the DNA data relates to tusks that were trafficked from 2011 to 2014, a period of rapid escalation, the science is still relevant today.

"It takes a long time to catch these guys," he said

From giant elephants to tiny spiders: Go wild with winners of Wildlife photographer of the year contest