Archaeologists unearthed the remains in Israel and send more than 100 skeletal samples for testing in Germany.

The ancient Philistines, the Biblical villains whose origins have puzzled scholars for decades, came to the Middle East from southern Europe more than 3,000 years ago, new DNA testing has shown.

The genetic findings came from skeletons unearthed by archaeologists in Israel in 2016, including the bones of infants buried beneath Philistine houses, archaeologists said in a paper published in Science Advances on Wednesday.

The much-maligned group is regularly depicted as the enemy of the Israelites in Biblical texts. The giant Goliath was a Philistine. So was Delilah who entrapped legendary warrior Samson.

Thanks to their bad press, their name has also become synonymous with crassness, ignorance and hostility to culture. But for all their prominence, where they came from before settling the coast of what is now southern Israel and Gaza remained a mystery. Varying theories had asserted their ancestors originated in the Aegean, or the northern Levant or that they were actually a local culture.

“Our study has shown for the first time that the Philistines immigrated to this region in the 12th century (BC),” said Daniel Master, director of the Leon Levy Expedition to Ashkelon, a coastal city where the first ever Philistine cemetery was found

The Ashkelon team sent more than 100 skeletal samples to Germany’s Max Planck Institute for the Science of Human History. DNA was found in ten individuals, particularly in the inner ear bones that preserved it over the millennia.

The findings, published on Wednesday in the journal Science Advances, showed three stages: pre-migration, migration, and then a dilution of the genetic footprint within the local population a couple of hundred years later. 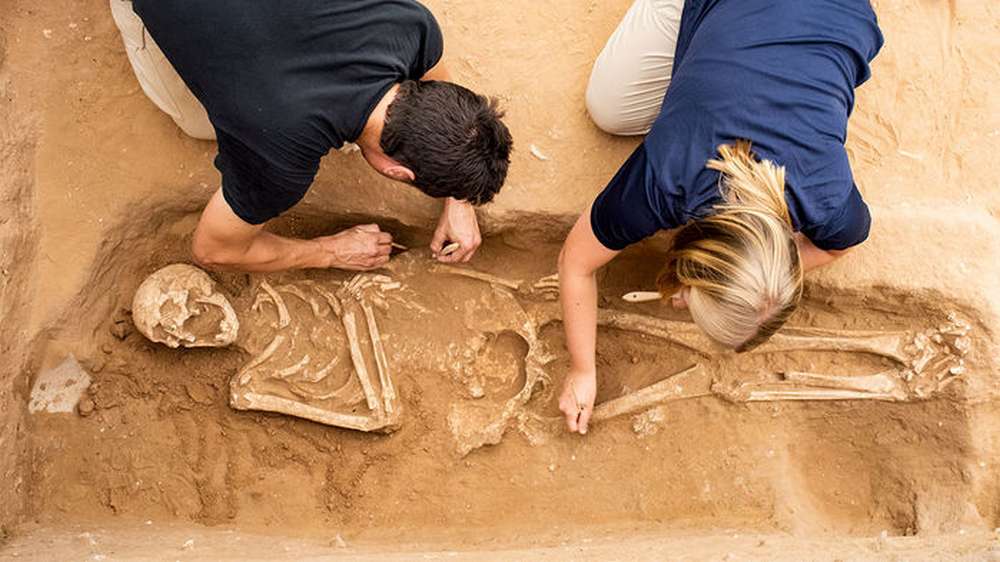 skeletons excavated at the ancient city of Ashkelon in present-day Israel suggest that the Philistines came from southern Europe. MELISSA AJA/COURTESY LEON LEVY EXPEDITION TO ASHKELON

Although the genetic modelling suggests southern Europe as the area of origin, there are some limitations to 3,000-year-old DNA testing, said Michal Feldman, an archaeo-geneticist who worked on the study at Max Planck.

“This ancestral component is derived from Europe, or to be more specific, from southern Europe, so the ancestors of the Philistines must have travelled across the Mediterranean and arrived in Ashkelon sometime between the end of the Bronze age and the beginning of the Iron age,” Feldman said. “There would be a lot more than we can say if we had more data, for example, we could maybe more precisely pinpoint the source of this migration,” she said.

Earlier work by the Ashkelon team has suggested the Philistines were actually no "philistines". Excavations of a 3,000-year-old cemetery in 2016 found bodies buried with jewellery and perfumed oil.