Thousands of runners brushed off health warnings Sunday to compete in the New Delhi half marathon, even as smog reached unhealthy levels in the world's most polluted major city.

More than 34,000 runners hit the streets of the Indian capital for the 21-kilometre-race that doctors wanted postponed because of Delhi's atrocious winter smog.

The US embassy website Sunday showed levels of the smallest and most harmful airborne pollutants reached 199 at race time — eight times the World Health Organization's safe maximum. At such readings, outdoor exertion is strongly inadvisable and doctors warn prolonged exposure can trigger asthma attacks, worsen lung conditions and increase the risk of heart attacks and strokes.

Some competitors wore face masks in Sunday's race but others said conditions appeared better than last year, despite virtually identical pollution readings across the capital on both race days.

"Last year was the first time for me (running in India) and the weather was difficult," the 19-year-old told reporters after the race. "But this time it was good and I was really happy. No problems for me during the run."

It was a one-two finish for Ethiopia, with Amdework Walelegn coming in behind Belihu, who improved on his personal best timing to clock 59:17 seconds. 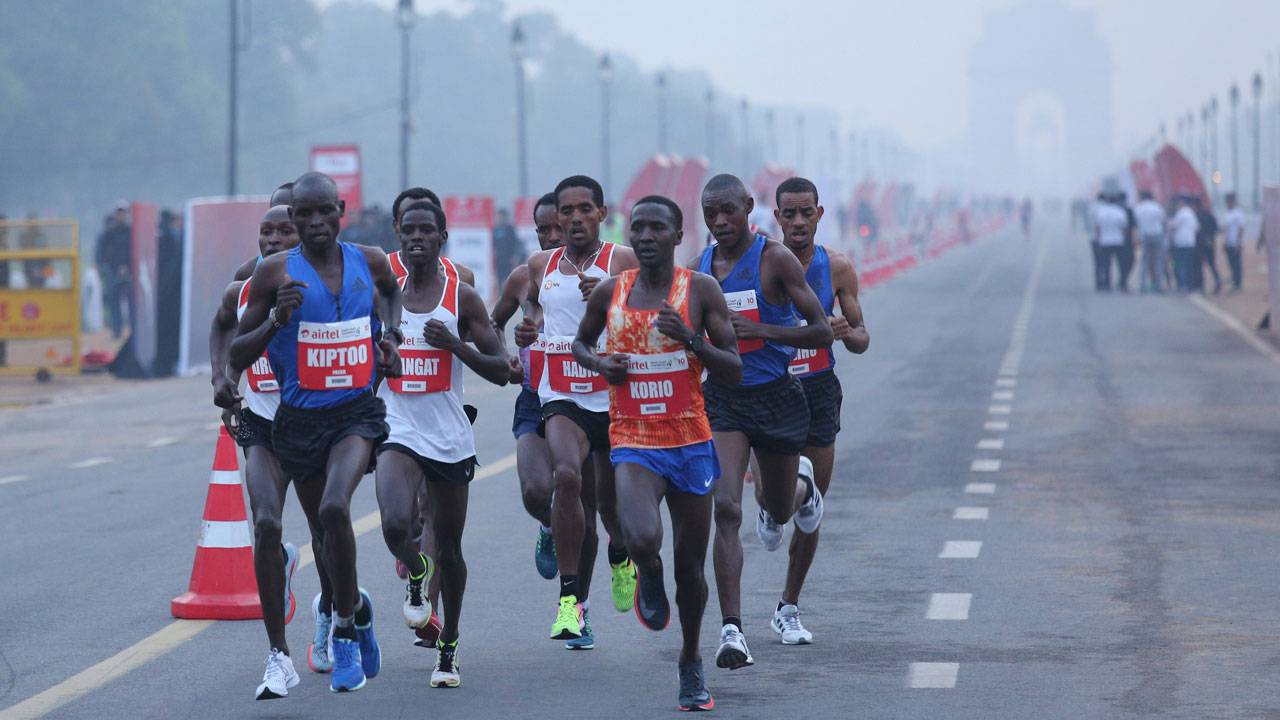 Participants run the half-marathon despite heavy smog in Delhi. AP

"Today was better. My friends and I were happy, we ran hard and enjoyed the run," 26-year-old competitor Pranav Patil told AFP.

Others were more cautious.

"Pollution is always there in Delhi. I think everybody should wear a mask," said Neeraj Chhibba, who jogged along in a protective face mask.

Every winter, air pollution in Delhi soars as cooler air traps harmful particles from crop fires, exhaust fumes, construction dust and industrial emissions close to the ground. Smog has climbed in recent weeks as temperatures have fallen and smoke from burning wheat fields in neighbouring states has reached the capital, mingling with urban pollutants.

The Heart Care Foundation of India had written to Delhi chief minister Arvind Kejriwal to warn the dangers of exposure to such unhealthy levels of smog warranted postponing the race.

But the race went ahead as planned, with organisers using a treated effluent they said would help reduce fine airborne particles along the course. More than 160 medical staff, including paramedics on bikes, and ambulances were stationed over the course.

The WHO in May listed 14 Indian cities in the world's top 15 with the dirtiest air, with Delhi dubbed the most polluted major centre.