An asteroid exploded in the sky & crashed into the ocean a year ago — and we found out just recently.

Earth is often in the firing line of fragments of asteroids and comets, most of which burn up tens of kilometres above our heads. But occasionally, something larger gets through.

That’s what happened off Russia’s east coast on December 18 last year. A giant explosion occurred above the Bering Sea when an asteroid some ten metres across detonated with an explosive amount of energy — ten times greater than the bomb dropped on Hiroshima.

So why didn’t we see this asteroid coming? And why are we only hearing about its explosive arrival now?

Had the December explosion occurred near a city – as happened at Chelyabinsk in February 2013 – we would have heard all about it at the time.

Plenty of people observed and captured the Chelyabinsk meteor explosion. But, since it happened in a remote part of the world, it went unremarked for more than three months, until details were unveiled at the 50th Lunar and Planetary Science Conference recently based on NASA’s collection of fireball data. 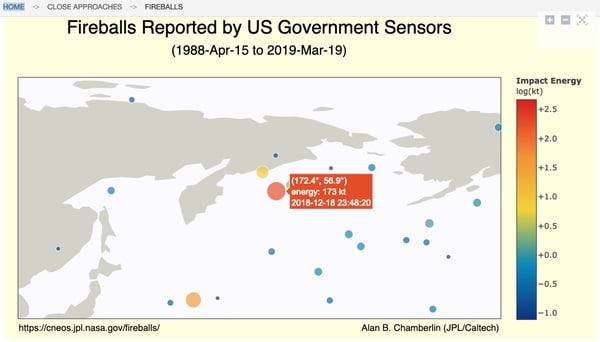 The 173kt fireball blast off Russia’s eastern coastline in December was the largest recorded since 2013’s fireball over the Russian city of Chelyabinsk. Image: NASA/JPL-Caltech/Center for Near Earth Object Studies

So where did this asteroid come from?

At risk from space debris

The Solar system is littered with material left over from the formation of the planets. Most of it is locked up in stable reservoirs – the Asteroid belt, the Edgeworth-Kuiper belt and the Oort cloud – far from Earth.

Those reservoirs continually leak objects into interplanetary space, injecting fresh debris into orbits that cross those of the planets. The inner Solar system is awash with debris, ranging from tiny flecks of dust to comets and asteroids many kilometres in diameter.

The vast majority of the debris that collides with Earth is utterly harmless, but our planet still bears the scars of collisions with much larger bodies.

The largest, most devastating impacts (like that which helped to kill the dinosaurs 65 million years ago) are the rarest. But smaller, more frequent collisions also pose a marked risk.

In 1908, in Tunguska, Siberia, a vast explosion leveled more than 2,000 square kilometres of forest. Due to the remote location, no deaths were recorded. Had the impact happened just two hours later, the city of St Petersburg could have been destroyed.

In 2013, it was a 10,000-tonne asteroid that detonated above the Russian city of Chelyabinsk. More than 1,500 people were injured and around 7,000 buildings were damaged, but amazingly nobody was killed. Image of the meteor trail, taken about 200km away from Chelyabinsk and a minute after the 2013 incident. Image: Flickr/Alex Alishevskikh

We’re still trying to work out how often events like this happen. Our information on the frequency of the larger impacts is pretty limited, so estimates can vary dramatically.

Typically, people argue that Tunguska-sized impacts happen every few hundred years, but that’s just based on a sample of one event. The truth is, we don’t really know.

What can we do about it?

Over the past couple of decades, a concerted effort has been made to search for potentially hazardous objects that pose a threat before they hit Earth. The result is the identification of thousands of near-Earth asteroids upwards of a few metres across.

Once found, the orbits of those objects can be determined, and their paths predicted into the future, to see whether an impact is possible or even likely. The longer we can observe a given object, the better that prediction becomes.

But as we saw with Chelyabinsk in 2013, and again in December, we’re not there yet. While the catalogue of potentially hazardous objects continues to grow, many still remain undetected, waiting to catch us by surprise.

If we discover a collision is pending in the coming days, we can work out where and when the collision will happen. That happened for the first time in 2008 when astronomers discovered the tiny asteroid 2008 TC3, 19 hours before it hit Earth’s atmosphere over northern Sudan.

For impacts predicted with a longer lead time, it will be possible to work out whether the object is truly dangerous, or would merely produce a spectacular but harmless fireball (like 2008 TC3).

For any objects that truly pose a threat, the race will be on to deflect them – to turn a hit into a miss.

Before we can quantify the threat an object poses, we first need to know that the object is there. But finding asteroids is hard.

Surveys scour the skies, looking for faint star-like points moving against the background stars. A bigger asteroid will reflect more sunlight, and therefore appear brighter in the sky - at a given distance from Earth.

As a result, the smaller the object, the closer it must be to Earth before we can spot it.

Objects the size of the Chelyabinsk and Bering Sea events (about 20 and 10 metres diameter, respectively) are tiny. They can only be spotted when passing very close to our planet. The vast majority of the time they are simply undetectable.

As a result, having impacts like these come out of the blue is really the norm, rather than the exception!

The Chelyabinsk impact is a great example. Moving on its orbit around the Sun, it approached us in the daylight sky - totally hidden in the Sun’s glare.

For larger objects, which impact much less frequently but would do far more damage, it is fair to expect we would receive some warning.

Why not move the asteroid?

While we need to keep searching for threatening objects, there is another way we could protect ourselves.

Missions such as Hayabusa, Hayabusa 2 and OSIRIS-REx have demonstrated the ability to travel to near-Earth asteroids, land on their surfaces, and move things around. 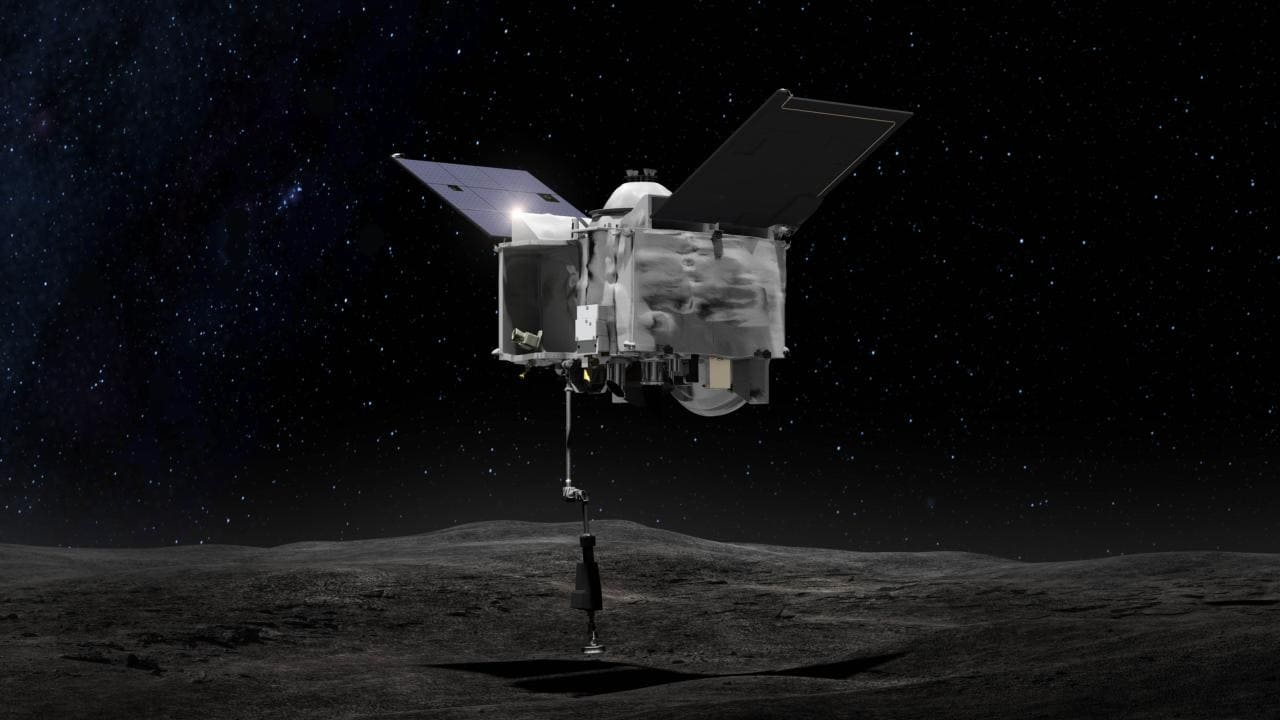 From there, it is just a short hop to being able to deflect them – to change a potential collision into a near-miss.

Interestingly, ideas of asteroid deflection dovetail nicely with the possibility of asteroid mining.

The technology needed to extract material from an asteroid and send it back to Earth could equally be used to alter the orbit of that asteroid, moving it away from a potential collision with our planet.

We’re not quite there yet, but for the first time in our history, we have the potential to truly control our own destiny.