Editor's Note: This story was published on 31 March 2020 and is being republished due to the supercyclone Amphan warning on India's east coast.

A team of scientists from the US just reported in Nature Communications that there has been a detectable increase in the rate of cyclone intensification. This is referred to as Rapid intensification or RI. RI not only leads to a devastating loss of life and property, but it also renders cyclones hard to predict. The study is global but confidence levels are high only for the Atlantic hurricanes due to data availability. One cannot help but wonder whether RI is occurring in the Indian Ocean as well.

The official definition of RI is that an increase of maximum sustained winds of a cyclone by at least 55 km/h occurs within 24 hours. Activity in the world’s major ocean basins is visible in this map, which shows the historical tracks of storms between 1842 and 2017. image credit: NOAA

The study focuses on the period covering 1982–2008 and uses data to identify cases where RI occurred. Data on the rate of intensification is obviously critical for drawing robust conclusions. The team then uses a model which can produce RI reliably, to analyse the role of global warming on RI. Models can simulate the counterfactual climate, i.e., conditions that would exist in the absence of global warming. The simulations of RI in the counterfactual world can then be compared to the actual conditions that exist now, to determine if global warming has had any contribution to RI.

Renowned hurricane expert Kerry Emmanuel of MIT, USA argued a few years ago that global warming will lead to enhanced RIs. He also notes that this would mean a reduced skill in forecasting hurricanes. There is no clear evidence that the total number of tropical cyclones (TCs) has increased under global warming. However, the number of TCs reaching ‘major’ categories (3–5) has increased. Regions with the fastest warming of sea surface temperatures (SSTs) appear to be favouring RI in the past 3–4 decades.

The Indian Ocean is warming rapidly and monotonically.

Model simulations with the anthropogenic and natural forcings included should resemble the observed or data-based estimates of the number of hurricanes that experienced RI. If they do, one would have confidence that the counterfactual world is also accurately represented by the model. The differences in actual and counterfactual worlds represent the influence of anthropogenic forcings on RI. 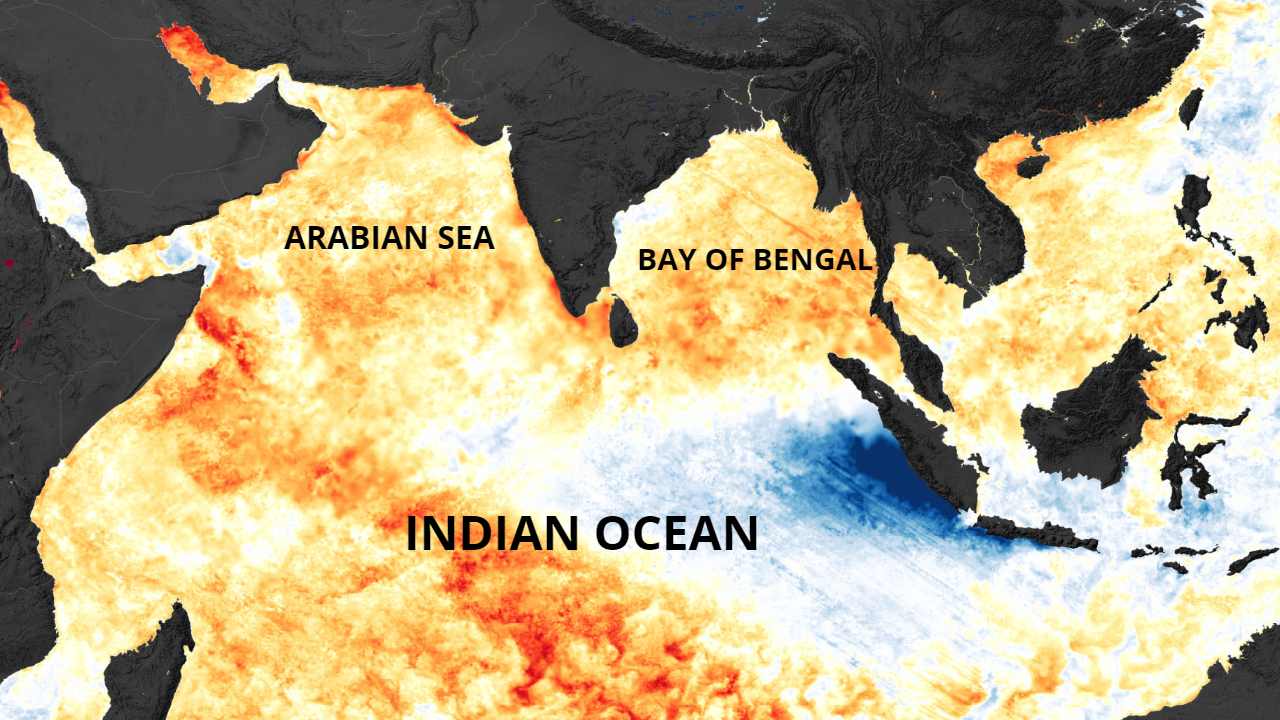 Oceanic activity around the subcontinent of India. Image credit: NOAA

The model used in the study is capable of faithfully reproducing observed RI during the study period. This model-data analysis shows that internal or natural variability alone cannot explain the increase in the fraction of TCs experiencing RI. This means anthropogenic forcings have played a role in increasing intensification rates during 1982–2009. This period is too short to totally eliminate decadal changes in RI that could naturally occur. But, the extensive comparison of multiple decades offers sufficient confidence to claim anthropogenic influence on RI.

The simulations are limited in number due to the high computational cost of models which capture TCs. Data limitations are also an issue, especially prior to the satellite coverage period for regions outside the Atlantic. For example, satellite coverage over the Indian Ocean has been sufficient only since 1998. Thus, no confident conclusions can be drawn about RI over the Indian Ocean. Nonetheless, the highly vulnerable Indian Ocean rim countries must step up similar attribution studies for detecting trends in RI.

Are Tropical Cyclones Changing over the North Indian Ocean?

It is well known that the North Indian Ocean has a pre- and post-monsoon cyclone season. The monsoon season has strong vertical shear — change in wind strength or direction with height — that inhabits TC formation. Dry desert winds also prevent the Arabian Sea TCs from growing very strong.

Last year made history for a very late monsoon onset and a withdrawal that dragged on into October. The cyclone season was also a monster with six severe, six very severe, and three extremely severe cyclone storms, with one becoming a super cyclone. Also unusual was the severe cyclonic storm that formed in June and displayed some RI. This cyclone Vayu wandered into the Arabian Sea after forming near the Maldives. It is unclear if the delayed onset of the monsoon created favourable conditions for this unusual occurrence. Increased TC intensities over the Arabian Sea because of black carbon and other aerosols are reported. Anthropogenic warming has increased the number of post-monsoon TCs growing to extremely severe cyclonic storms over the Arabian Sea. Global warming is also found to increase the intensity of TCs over the Bay of Bengal.

However, there is a lack of long-term observational data for TC intensification rates. Thus, no robust statement can be made about RI over the North Indian Ocean. The precautionary principle would demand that strategies for collecting necessary data to track RI be established urgently.

Cyclones are seen to be moving more slowly with global warming and tend to stall near coasts. This typically leads to devastating amounts of rains in short periods. The impact of rapid and monotonic warming of the Indian Ocean could exacerbate the impact of TCs in addition to pumping moisture into widespread monsoon extremes.

The good news is that IMD’s forecasting skills are increasing each year, and the errors in position are decreasing. If the RI of TCs increases, however, these skills might not be very useful.

All of this only underscores the need for sustained observations needed to advance the process and predictive understanding of TCs and RI in our region. Despite the rapt attention on the global crisis precipitated by COVID–19, we cannot take our eyes off the pre-monsoon cyclone season creeping upon us.

Returning to COVID–19, we must remember that warm temperatures and heavy rain provide a perfect petri dish for breeding the numerous, endemic, waterborne diseases in India. We can only hope that COVID–19 does not add to this already volatile mix.