Crop residue burning in Punjab and Haryana is often blamed for worsening air quality in the Delhi NCR.

Analysis from multiple sources of information and data shows that emissions resulting from crop stubble burning in Punjab, Haryana and western Uttar Pradesh are increasingly spreading towards central and southern states and eastern fringes of the Indo-Gangetic Basin (Bihar and West Bengal) through long-range transport mechanisms, mainly due to prevailing wind pattern.
The increasing trend of finer black carbon particles and greenhouse gases has accelerated since 2010 due to growing mechanised harvesting that leaves more residues in the form of stalks, stubbles and straws.

The black carbon increase has been confirmed by observation of multi wavelength dependent aerosol properties. “Our study shows an increased risk to ambient air quality and an increased spatiotemporal extent of pollutants in recent years from crop residue burning, which could be a severe health threat to the population living in these regions,” says the study published in Journal of Geophysical Research-Atmosphere. 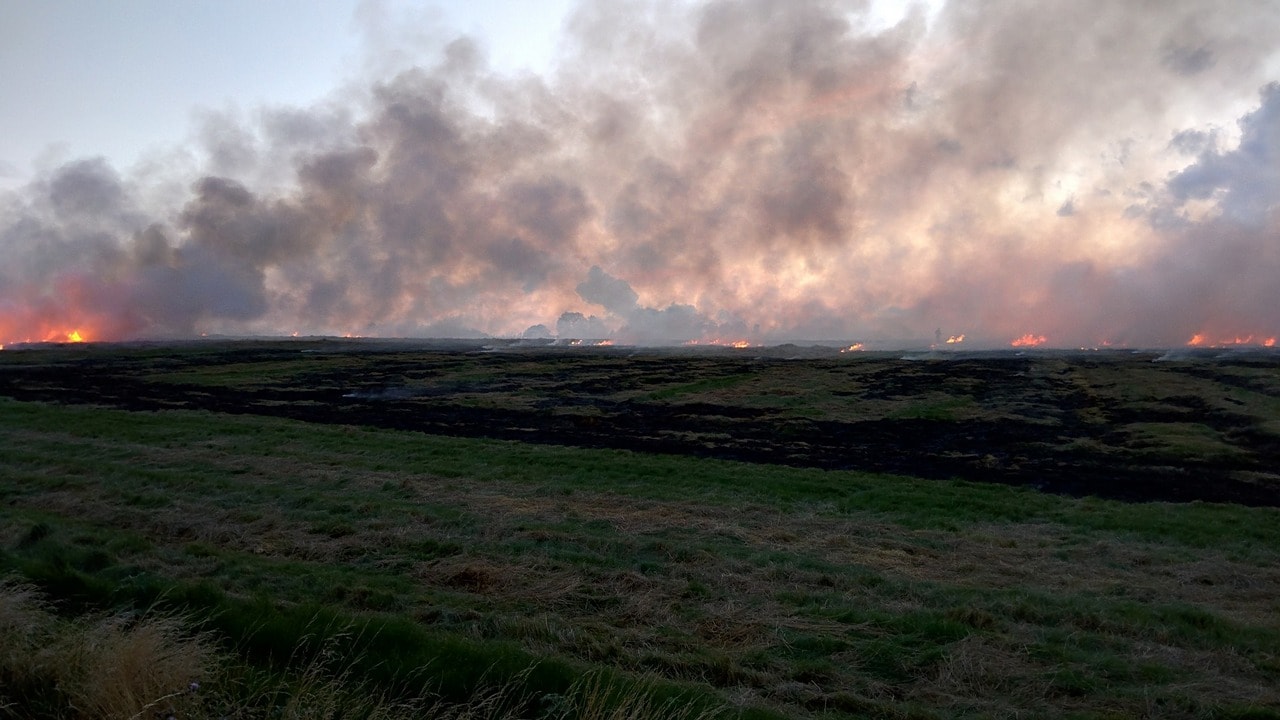 While dust aerosols are largely confined to their source regions of western and northwestern India, the increase in black carbon is more evident along the eastern Indo-Gangetic Plain and central India, conforming to the northwesterly wind direction in the post-monsoon period. The month-wise trend of black carbon shows pronounced increase in November in the eastern and central-south regions at the time of crop residue burning in the northwestern parts.

“The most widespread increase in black carbon over the eastern and central-south regions is seen in the post-monsoon and winter periods, thus confirming the greater role of transport of black carbon from northwesterly source regions in during this time,” the study has concluded.

An earlier study had also attributed the wintertime peak in black carbon in Hyderabad to crop residue and biomass burning in the northwestern regions, and not to local sources. In the new study, researchers took into account emissions from various sources locally in central and south India – including local crop residue burning — and then calculated the increase in black carbon.

“Some amount of crop residue burning takes place in central and southern states as well, but it happens mostly in late February to May. We are finding maximum increase in carbonaceous burnt residues (black carbon) or PM 2.5 during the November timeframe. So this increase has to come from crop residue burning source areas located in northern states,” explained Dr Sudipta Sarkar while speaking to India Science Wire.

In addition, Dr Ramesh Singh pointed out “the wind direction during November is primarily northerly to north-westerly. In recent years, mainly from 2010, pollutants during crop residue burning season, reach central parts of the Indo-Gangetic plains and beyond. There is strong evidence that any increase in PM 2.5 and fine particulate matters in central and southern states during November, is happening because of crop residue burning in north Indian states.” This has been validated in the study by looking at PM 2.5 data from a number of weather stations located in regions like Nagpur, Aurangabad and Hyderabad.

"The findings of this study are not surprising in terms of causes and impacts but highlight the importance of regulation for crop residue burning. Regulation on groundwater use and electricity subsidy can also be important measures as they will reduce the rice planted area. The problem of air quality is also linked with rapid depletion of groundwater in the northwest India and is among the most unsustainable nexus of water-energy-food-air quality,” commented Dr Vimal Mishra, head of the Water and Climate Lab at IIT Gandhinagar, who was not connected with the study.

The new findings have serious implications for human health. The deterioration of air quality is of great concern, particularly over the eastern Indo-Gangetic Plains which is already riddled with pollution from various coal mining, fossil fuel combustion, industrial sources and vehicular traffic.