This is a big boost for the experimental vaccine, which is among three front-runners in a global effort to find a preventive vaccine for COVID-19.

One of the experimental coronavirus vaccines being developed and tested by Oxford University and AstraZeneca has shown an immune response against COVID-19 in trial volunteers, as per new data published in the Lancet.

The AZD1222 experimental vaccine uses an inactivated (harmless) form of the COVID-causing SARS-CoV-2 virus for the immune system to use as target practice to fight off a future coronavirus infection.

Based on the data released by the phase one/phase two study, which included 1,077 healthy volunteers, the vaccine was found to trigger two unique, important immune responses. The first response was an increase in the production of antibodies, which helps the immune system track and target the virus in the body. The second was an increase in a class of immune cells called T-cells, which destroy both viral particles and human cells infected by the virus, with the help of antibodies.

Scientists say this is a good sign for the experimental vaccine candidate, retaining its status as the front-runner in the global effort to find a working vaccine to prevent COVID-19 infection. A vaccine is yet to be developed to prevent further spread of Covid-19, but a lot of effort and financing is going into the effort.

The two-pronged immune response is ideal, according to Professor Adrian Hill, one of the study authors from Oxford.

"Having both of these after vaccination — sometimes after a single dose, but much better after a second dose — is pretty encouraging," Hill told NPR. "Nobody can say for certain what you need to get protection in this disease because it's never been done before."

Some of the side-effects researchers noted in participants who were given the vaccine were muscle aches, chills, and a fever. But different doses of acetaminophen (Paracetamol) gave all the participants relief, the study authors noted.

The study doesn't reveal any serious adverse reactions, which is an encouraging result. However, an understanding of the uncommon reactions to the vaccine will only become apparent in Phase 3 trials, when it is tested in tens of thousands of people. 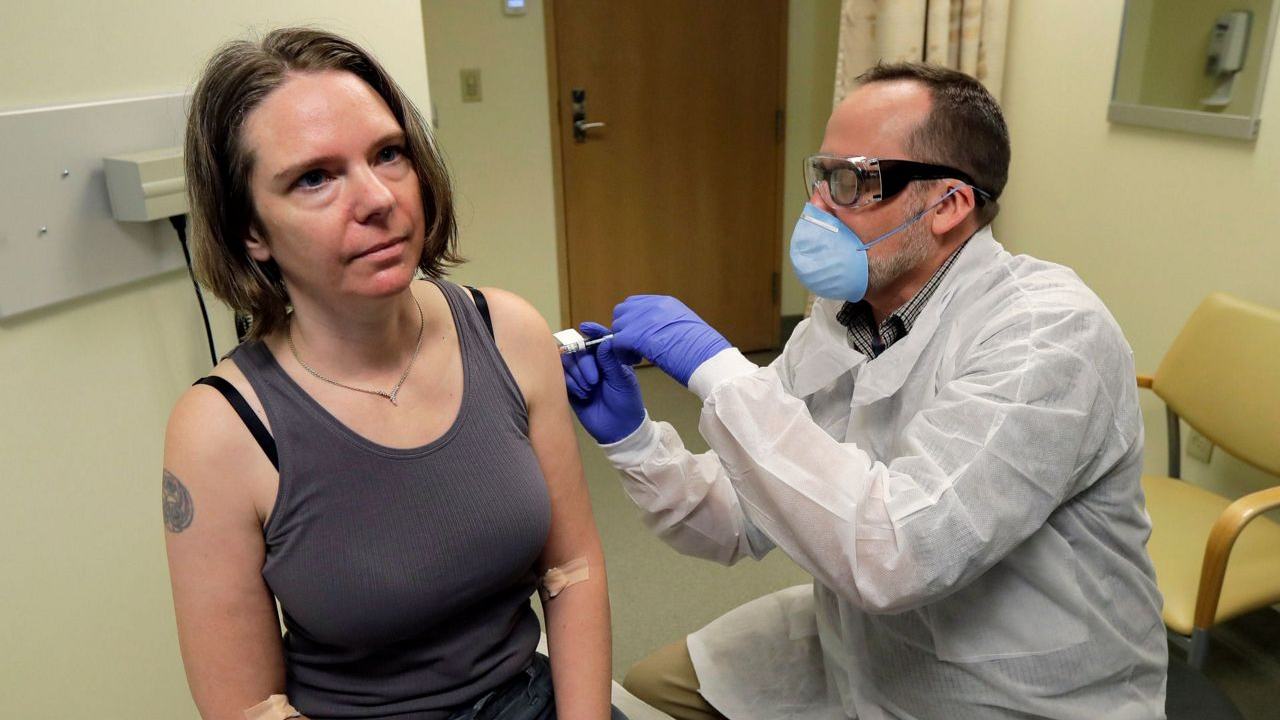 A pharmacist gives Jennifer Haller, left, the first shot in the first-stage safety study clinical trial of a potential vaccine for COVID-19. AP

The AZD1222 experimental vaccine works by targeting the "spike proteins" that cover the outer surface of the SARS-CoV-2 virus. It is being developed by the University of Oxford in a collaboration with pharma giant AstraZeneca.

In May this year, the Trump administration awarded the Oxford-AstraZeneca partnership $1.2 billion as part of 'Operation Warp Speed', to have a widely-available COVID-19 vaccine in the US by January 2021. The US remains the worst affected nation by the coronavirus pandemic, with over 3.8 confirmed cases as of 21 July, and around 65,000 new cases being reported every day in recent weeks.

Currently, there are 24 COVID-19 vaccine candidates in different stages of clinical trials, as per the World Health Organization. So far, only three of them – the Oxford-AstraZeneca vaccine, a similar inactivated vaccine from SinoVac, and the Moderna mRNA vaccine – have begun phase three human trials, which are the largest and usually the final stage of trials before a vaccine comes to market.

Another 142 candidates from many different countries are now in preclinical studies.