This gas cloud in the constellation Aquilla 'beats' in rhythm with a black hole 100 light-years away.

An international team of researchers using data from Arecibo Observatory and the Fermi Space Telescope have discovered what they call a "gamma-ray heartbeat" coming from a cosmic gas cloud.

The cloud is in the constellation Aquilla and "beats" in rhythm with a black hole 100 light-years away in a microquasar system known as SS 433. The results were published today in the journal Nature Astronomy.

"This result challenges obvious interpretations and is unexpected from previously published theoretical models," said Jian Li, a Humboldt Fellow with the Deutsches Elektronen-Synchrotron in Zeuthen, Germany, and study co-author.

"It provides us with a chance to unveil the particle transport from SS 433 and to probe the structure of the magnetic field in its vicinity," added Li.

In the SS 433 system, a black hole orbits a "giant star" 30 times the mass of Earth's sun. The black hole sucks matter from the giant star while orbiting it, forming a swirling accretion disc that drains into the black hole, like water into a bathtub drain. 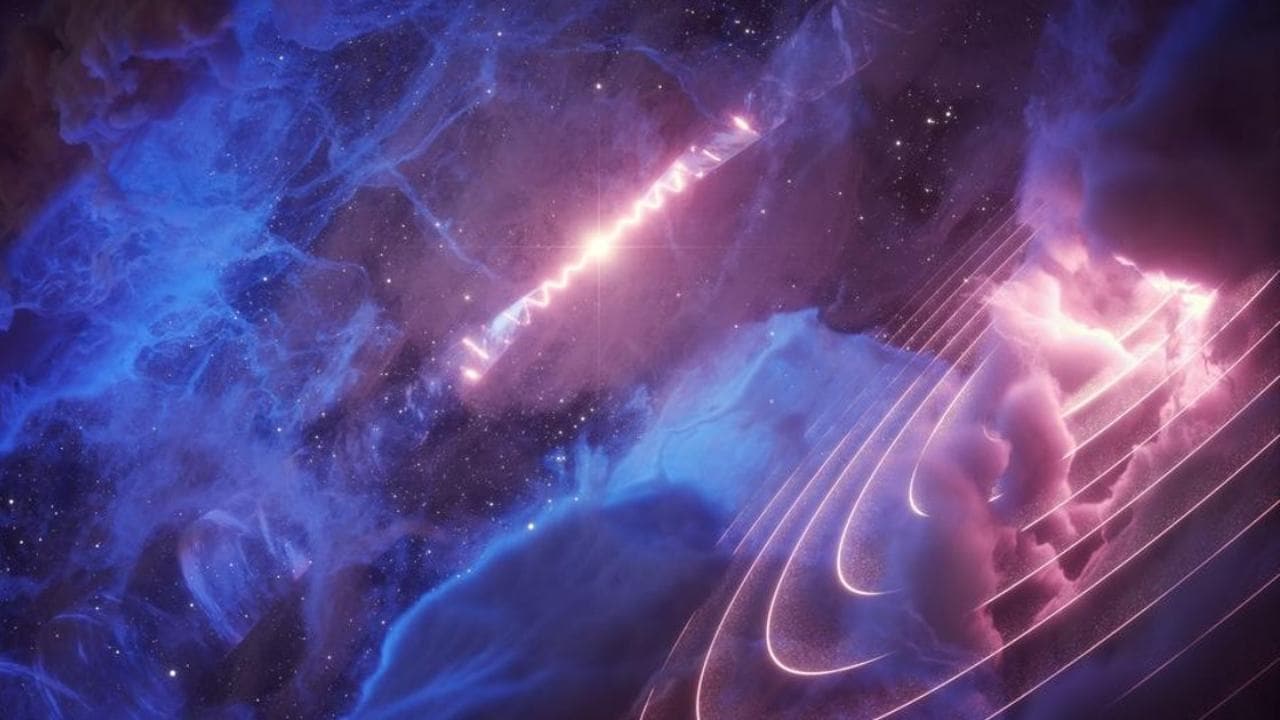 The gas cloud pulsates at the same rhythm as a distant quasar with a black hole at its center. Image: DESY/SciComLab/Instagram

Some of the matter doesn't fall into the hole though but rather jets out in high-speed spirals from the disc's center in both directions, top, and bottom, like pegs on a wheel.

The researchers made the discovery by analyzing more than a decade of data from NASA's Fermi Large Area Space Telescope and from Galactic ALFA HI survey data  collected with the Arecibo Observatory's 1,000-foot-wide radio telescope.

The observatory was recently damaged and is currently offline, but scientists continue to have access to data previously collected. Engineers are assessing what caused a cable to break and plans for repairs.

The researchers found that the precession, or wobble, of the black hole's jets, matched with a gamma-ray signal emitted from a gas cloud. The researchers have labeled the position in the gas cloud Fermi J1913+0515. The position was revealed using Arecibo Observatory's telescope, and Fermi provided data about the SS 433 system.

"The consistent periods indicate the gas cloud's emission is powered by the microquasar," Li said.

Voilà, here’s the puzzling discovery our last post referred to: A strange gamma-ray heartbeat from a cosmic gas cloud that pulsates in sync with a wobbling black hole. The black hole is part of a so-called microquasar. This consists of the black hole and a giant star orbiting each other, while the black hole constantly sucks matter from the star. This matter collects on an accretion disk before falling into the black hole. However, some of the matter does not fall into the black hole, but is hurled out into space in two narrow jets at the top and bottom. As the accretion disk does not lie exactly in the orbital plane of the two partners, it sways like a spinning top set at an angle, and with it the jets do so as well, describe spirals in space. In the same rhythm as the tumbling jets and accretion disk, the inconspicuous gas cloud about 100 light years away pulsates in gamma rays. This temporal correspondence that was revealed by ten years of data from @NASA’s Fermi gamma-ray space telescope suggests a direct connection, but it is not clear exactly how the microquasar drives the gamma-ray "heartbeat" of the gas cloud. Animation: The amazing @scicomlab for DESY #space#science#astro#astrophysics#astroparticlephysics#research#physics#gamma#ray#gammaray#space#telescope#cosmos#cosmic#discovery#research#scienceiscool

Scientists still do not fully know how the jets overcome the black hole's pull and are emitted from the disc, and the current study presents a new question – how does the black hole power the gas cloud's heartbeat?

The study's researchers say further observations and theoretical work are needed, but one suggestion is that the cloud's gamma-ray emissions are caused by the injection of the nuclei of hydrogen atoms, known as fast protons, that are produced at the end of the jets, or near the black hole.

"SS 433 continues to amaze observers at all frequencies and theoreticians alike. And it is certain to provide a testbed for our ideas on cosmic-ray production and propagation near microquasars for years to come," Li said.