France, Italy, Japan and the United States have all said that they were working to evacuate their citizens from Wuhan.

The death toll from China’s new coronavirus grew to 80 on Monday as residents of Hubei province, where the disease originated, were banned from entering Hong Kong amid global efforts to halt the rapid spread of the outbreak.

The number of deaths from the flu-like virus in Hubei province climbed from 56 to 76 overnight, health commission officials said, with four deaths elsewhere. The total number of confirmed cases in China had risen about 30 percent to 2,744.

U.S. S&P500 e-mini futures fell more than one percent in Asian trade on Monday on mounting worries the outbreak of the virus could severely disrupt the Chinese economy, an engine of global growth. 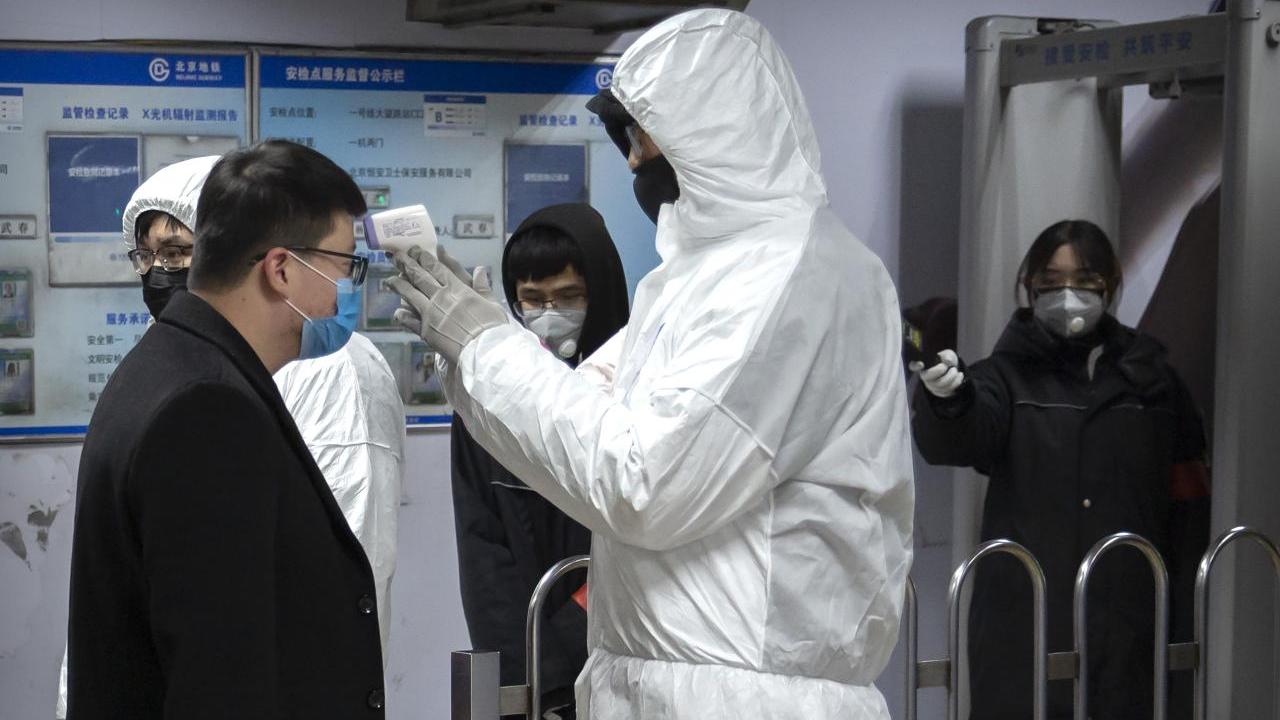 A worker wearing a hazardous materials suit takes the temperature of a passenger at the entrance to a subway station in Beijing, Image credit: AP

Kicking off the Asian trading day, New Zealand shares fell with travel and tourism-related stocks among the worst performers as the speed of the outbreak’s spread raised alarm over its future impact on movement.

China’s cabinet said it would extend the week-long Lunar New Year holiday by three days to 2 February in a bid to slow the spread of the virus. The Hubei city of Wuhan, the epicentre of the outbreak, is already under virtual lockdown, with severe restrictions on movement in place in several other Chinese cities.

Beijing has called for transparency in managing the crisis after the public trust was eroded by a cover-up of the spread of SARS, a coronavirus that originated in China and killed nearly 800 people globally in 2002 and 2003.

The newly identified coronavirus has created alarm because much about it is still unknown, such as how dangerous it is and how easily it spreads between people. It can cause pneumonia, which has been deadly in some cases.

The virus, believed to have originated in a seafood market in Wuhan that was illegally selling wildlife, has already spread to cities including Beijing and Shanghai.

The World Health Organisation (WHO) last week stopped short of calling the outbreak a global health emergency, but some health experts question whether China can contain the epidemic.

WHO Director-General Tedros Adhanom Ghebreyesus said on Saturday he was on his way to Beijing to meet officials and health experts dealing with the coronavirus.

“My @WHO colleagues & I would like to understand the latest developments & strengthen our partnership with China in providing further protection against the outbreak,” he said on Twitter.

We are working 24/7 to support 🇨🇳 & its people during this difficult time & remain in close contact with affected countries, with our regional & country offices deeply involved. @WHO is updating all countries on the situation & providing specific guidance on what to do to respond

Chinese-ruled Hong Kong has six confirmed cases and said it would ban entry from Monday to people who have visited Hubei province in the past 14 days. The ban does not apply to Hong Kong residents.

Airports around the world have stepped up screening of passengers from China, although some health officials and experts have questioned the effectiveness of these efforts.

France, Italy, Japan and the United States all said they were working to evacuate citizens from Wuhan.

France said it expected to repatriate up to a few hundred of its 800 citizens living in the Wuhan area. Evacuees would have to spend 14 days in quarantine to avoid spreading the virus in France.

Hubei’s governor, Wang Xiaodong, said at a news conference on Sunday he felt “agonised” and responsible for the outbreak. He described the situation as severe and said medical supplies were still tight.

“He thinks one sentence of apology will be enough to solve the problem? Let’s await the judgment of the people of the country,” one user posted.