COPD: A threat to life that doesn't discriminate between smokers and non-smokers

COPD is a life-threatening lung disease expected to be the third leading cause of death by 2030.

Human beings take more than 6 million breaths a year. On an average, a person breathes 12 to 15 times a minute, at rest. That’s a lot of work for the pair located on either side of the heart just behind the rib cage called lungs.

By taking the oxygen from the environment and transferring it to the bloodstream this organ performs one of the most important functions of the human body. However, not every person’s body can perform this function smoothly and seamlessly.

The third Wednesday in November i.e., 21 November this year is proclaimed as World COPD Day. This year's theme of “Never too early, Never too late” was chosen by The Global Initiative for Chronic Obstructive Lung Disease (GOLD), an organization that aims to spread awareness by hosting seminars, sharing information documents and various activities around it. Through these 30 days, the objective is raising consciousness about a group of lung conditions that are caused due to narrowing of the airways and thus it is also regarded as the National Chronic Obstructive Pulmonary Disease (COPD) Awareness month. People suffering from this disorder find it difficult to breathe.

COPD is a progressive life-threatening lung disease that causes breathlessness and is expected to become the third leading cause of deaths worldwide by 2030, according to WHO.

The most common form of COPD is emphysema that tends to destroy the air sacs in your lungs, which interferes with the outward air flow and bronchitis that causes inflammation that narrows the bronchial tubes to then build up mucus.

According to a report by Global Burden of Disease Study, around there were 251 million cases of COPD in the world in 2016 and it is estimated that this disease leads to 3.15 million deaths per year.

In India, the number was about 13 percent, as per a 2016 study titled ‘Lifestyle Diseases: Body Burden’ done by the Centre for Science and Environment (CSE). It further stated that rural men and women are at a higher risk of COPD than their urban counterparts.

The many different causes COPD has harmless symptoms that can usually be ignored and considered to be a process of aging.

Thus, symptoms like a persistent or changed cough should not be dismissed as the flu or a cold. There other symptoms that can help to detect this disease at an early stage include occasional shortness of breath after any physical activity, mild recurrent cough, wheezing, chest tightness, frequent respiratory infections or lack of energy.

As for treatment, there are medicines that can help people breathe easier. There have been major advances in the field of inhalational treatment for COPD, which has a far lower side-effect profile than the oral ones used two-three decades earlier.

Programs like pulmonary rehabilitation help educate patients in the exercise, food, and breathing techniques needed to live with COPD. However, the single most important step in treating the disease is to quit all active and passive smoking.

Also, exercising gradually and then increasing the duration and intensity of it is one of the most effective ways of maintaining lung capacity in COPD patients. This should be done under the guidance of their doctor. 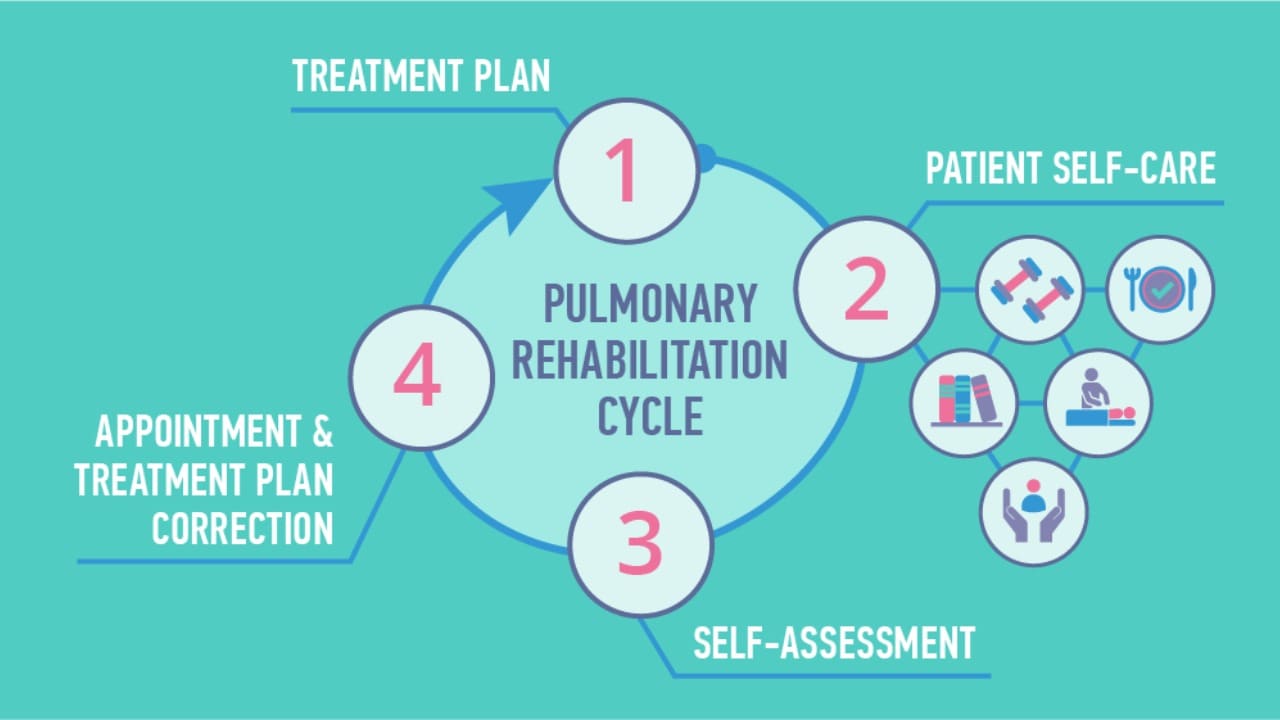 A look into what a Pulmonary Rehab Cycle entails. Image credit: Hit Consultation

Another important factor that people suffering from it should be careful about is not getting lung infections as it can aggravate their illnesses.

Though there is no specific diet for these patients, here are some tips that can help them stay strong and healthy:

So, mark today as the day to take forward the legacy of spreading awareness by informing and educating more people about COPD. Celebrated in over 50 countries since 2002, people with this mission adorn an Orange color ribbon, though some organizations even use gold and grey.

Irrespective of your choice of ribbon, notifying even one person about it can make a huge difference to the lives of these patients.