From 1990 to 2015 there was a nearly 40 percent drop in stunting in poor countries but 140 million children four or younger are still too short for their age.

Malnourished children suffering from stunting may have intestinal damage caused by continual exposure to pathogens that reduces their ability to absorb nutrients, according to research Monday calling for treatments that go beyond providing extra food. Despite a nearly 40 percent drop from 1990 to 2015 of stunting in poor countries, some 140 million children four or younger are still too short for their age, a clinical condition that impairs both brain and body development. 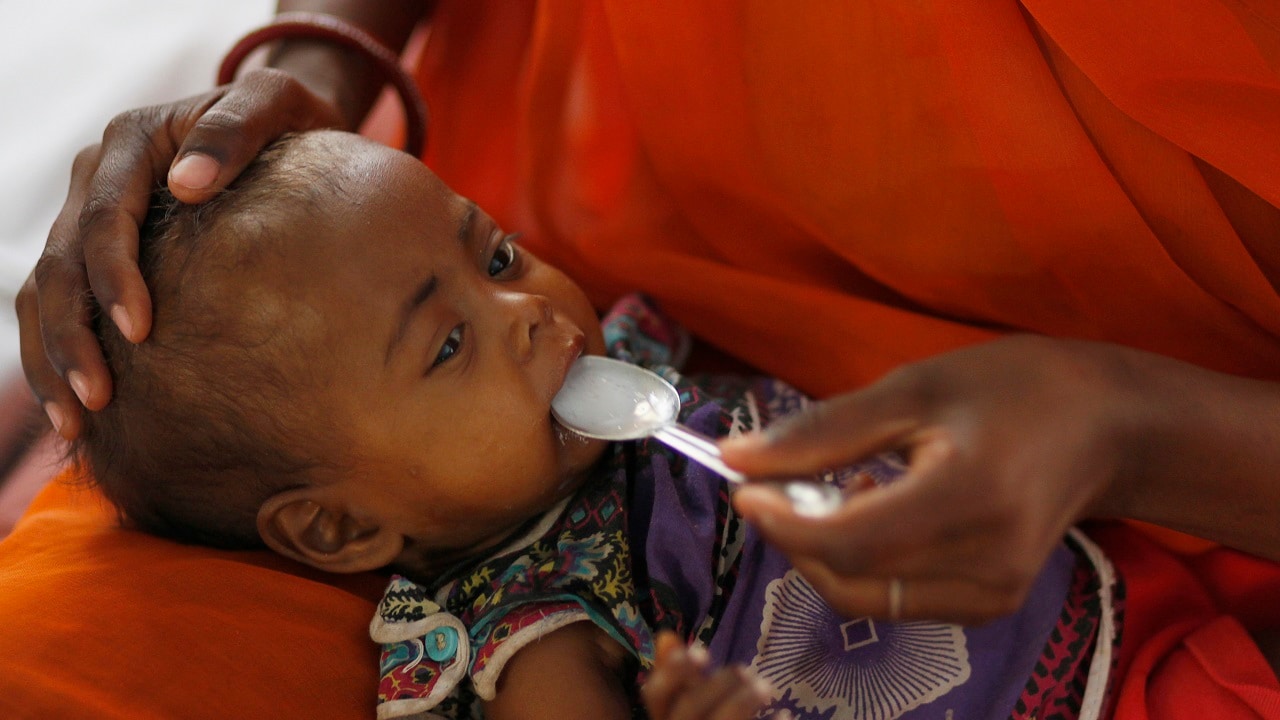 A mother feeds her malnourished child in the Nutritional Rehabilitation Centre of Sheopur district in Madhya Pradesh. India ranked 65th out of 84 countries in the Global Hunger Index of 2009, below countries including North Korea and Zimbabwe a decade ago. Reuters

Researchers, who studied more than 300 children in Zambia, found evidence that reduced absorption of nutrients could be caused by a survival mechanism in the gut triggered by intense exposure to microbial pathogens, like bacteria, viruses and parasites.

"It would seem obvious that the appropriate treatment for malnutrition is food, and clearly without food no-one can recover from malnutrition," said co-author Paul Kelly, professor of tropical gastroenterology at Queen Mary University of London. "But often it's not enough. Once children in disadvantaged populations become clinically malnourished, providing extra food is insufficient to guarantee recovery."

Despite a nearly 40 percent drop from 1990 to 2015 of stunting in poor countries, some 140 million children four or younger are still too short for their age, a clinical condition that impairs both brain and body development. And for millions of children in parts of Africa and South Asia, the study said gut damage due to environmental factors is a major contributor to stunting.

Previous research has shown that a proportion of children remain stunted despite food and sanitary interventions, Kelly said.

For the latest study, which looked at infants in Lusaka, Zambia between 2016 to 2019, researchers using endoscopy and microscopy to assess intestinal health. They found "very intense infection pressure" with gut pathogens, Kelly said.

He said researchers were surprised to find evidence that the gut adapts to these pathogens moderating the process through which gut bacteria can infiltrate into circulation in the body and trigger inflammation.

But in staving off the pathogens, the response also may lead to a reduced ability for the body to absorb nutrients from food.

"In other words, stunting is the price you pay for staying alive," Kelly said, adding that this should alter the way stunting is treated. "We are going to have to be more subtle about unravelling this adaptive response than merely providing extra rations."