Conservation may benefit from learning how animals cope with fear, use social learning

Humans could be adding to natural stressors in social animals, and possibly giving them ulcers.

Stanford Biologist Robert Sapolsky famously titled his book, 'Why Zebras Don’t Get Ulcers' to suggest that anybody who can get out of the fight-or-flight response quickly will have reduced stress and can thus avoid diseases like hypertension, ulcers, heart diseases and so on.

Animals like zebras are thought to react instantaneously to danger. Whether it is being chased or being attacked by a predator, a zebra will quickly return to its normal state. Our ancestors like baboons and we humans, on the other hand, have a higher cognitive ability — an evolutionary trait that comes with a penalty.

We are capable of forethoughts of danger like losing our jobs, divorce, financial stress, etc., which put us in extended periods of stress. Some human conditions like child abuse or abusive relations can also lead to chronic stress and release of stress hormones which can make us seriously ill, even kill us if we take it too hard on ourselves. Deer, like many other social animals, groom others living in close proximity as a means of bonding and reinforcing social structures, family links, and build companionships. Image: Wikimedia Commons

SNS is the evolutionary alarm bell and the fight-and-flight response needed to survive danger, whether real or perceived. PNS is the rest-and-digest response that releases hormones to elevate the mood and lower blood pressure. If the SNS is disconnected for some reason, one can survive just fine. But take away the PNS and it will lead to chronic stress, disease and death.

Recent data on antelopes from Mozambique’s Gorongosa National Park to elk from America’s Yellow Stone National Park, cichlids from Lake Victoria, as well spiders and grasshoppers from all over indicate that even the animals, fish and insects with a lower cognitive ability may be living in constant fear of their predators. For example, grazers are argued to choose to inhabit the forests instead of the lush green grasslands despite the worse quantity and quality of food in forests. Wide open grasslands leave them open to danger from predators as well whereas forests offer cover and better chances for a quick getaway.

Ecosystems are found to benefit from this fear of predators since grazing pressure on them is reduced. Even the smell and sound of predators are found to drive away the grazers. Maybe these can serve as ecosystem management tools. However, not everybody agrees with the relation between predators and prey and their choice of habitats. Controlled experiments continue in the Gorongosa National Park to test the hypothesis that grazers live in a 'landscape of fear'. 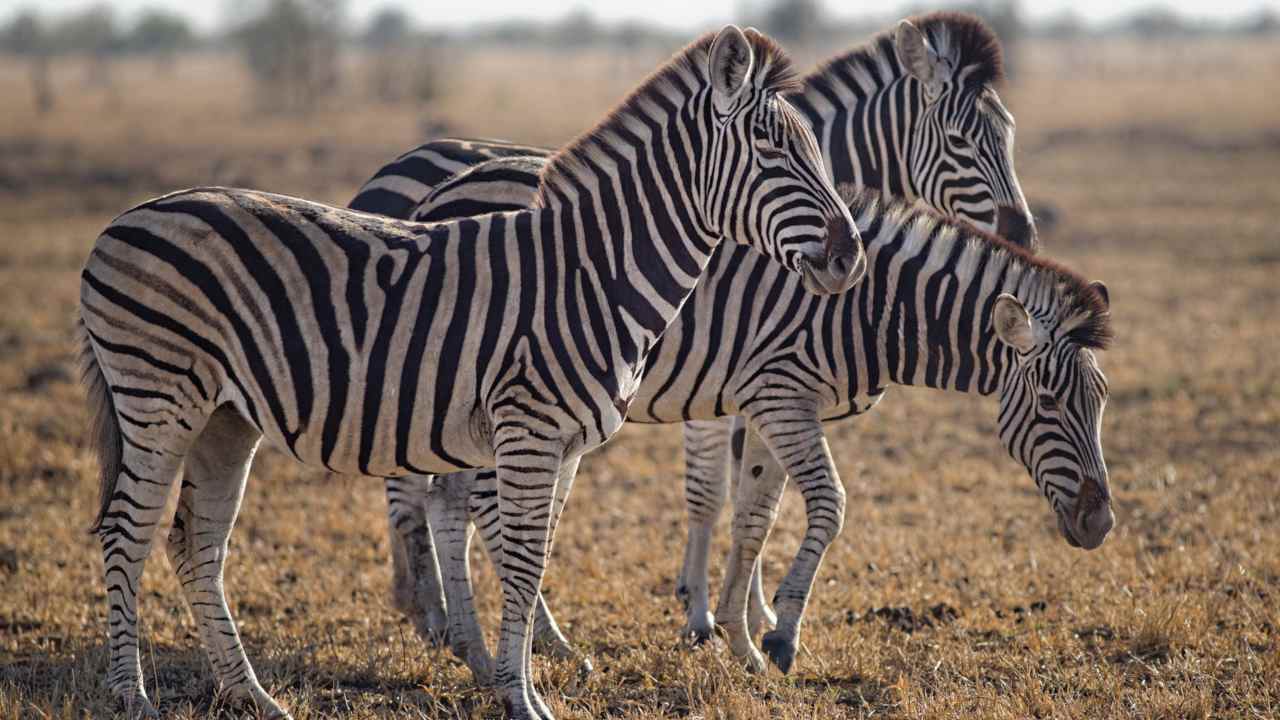 Maybe zebras do get ulcers. They move unpredictably across the landscape, presumably to keep lions from guessing their locations.

So, maybe zebras do get ulcers after all. That said, evolution does seem to offer pathways for stress reduction and ulcer avoidance in many species. Conservation biology is now looking to the role of animal cultures and social learning in devising strategies for conservation of species. Rapid learning to natural and human perturbations in species ranging from whales to dolphins and elephants to cranes are seen to be adaptations to finding richer feeding grounds, higher fertility, and many learned behaviors with various advantages. As can be expected, there is some bad news as well when it comes to human impacts on social animals.

Non-human species were assumed to be bound by vertical learning alone or genetically inherited 'intelligence'. This is often interpreted as an ability to learn new tricks like tool building but not to transfer the acquired knowledge to others. Humans were assumed to be the only species with oblique and horizontal learning capabilities. Oblique learning is from parents, teachers, and heroes like Mahatma Gandhi, Steve Jobs, Warren Buffett and so on. Horizontal learning occurs with peers and friends. But much new knowledge on social learning among vertebrates and potentially even in invertebrates indicates that the so-called 'second inheritance' may be much more common than previously assumed.

More data from social behavior of as many species as we can possibly study could yet throw up surprises on their capabilities in horizontal and oblique learning. Genetic–cultural coevolution could explain much better the phenotypes, ecotypes or environmental selections of genetic traits of a particular species. Such coevolution can lead to much faster genetic divergence than genetic evolution alone. This means understanding social learning and transmission of knowledge among animals is imperative for effective conservation of species.

Understanding the social structures, units, cultural knowledge centers and transmission methods in different species may offer smarter ways to avoid conflicts with humans as well as engineering of better adaptation options for many species in a warming world. An example of a knowledge center is the matriarch in African elephant herds. The matriarch is found to not only make critical decisions for the herd but also lead to higher overall fertility by training her daughters on child rearing. This underscores the importance of the conservation of these social knowledge hubs and not just the young‘uns of the species.

One adorable example of exploiting social learning of a species to help it adapt is the use of light aircrafts to 'teach' migratory routes to whooping cranes. Such social learning is found to lead to higher migratory accuracy. Acquisition of environmental information and social exchange of information is also found among species of ungulates when they are introduced to new locales.

One alarming finding just reported in journal Science confirms that human impact is not only manifest in habitats and resources for wild animals but also has a detrimental influence on their social learning and knowledge propagation. The so-called 'disturbance hypothesis' was tested in 144 chimpanzee communities for 31 behavioral traits such as tool use. There was a whopping 88 percent drop in these behaviors among chimpanzees occupying habitats with high human impact compared to those which lived in less human-impacted areas. How the gene-cultural evolution and overall population or genetic diversity of species are affected by humans cannot be fully fathomed without considering the significance of animal cultures. 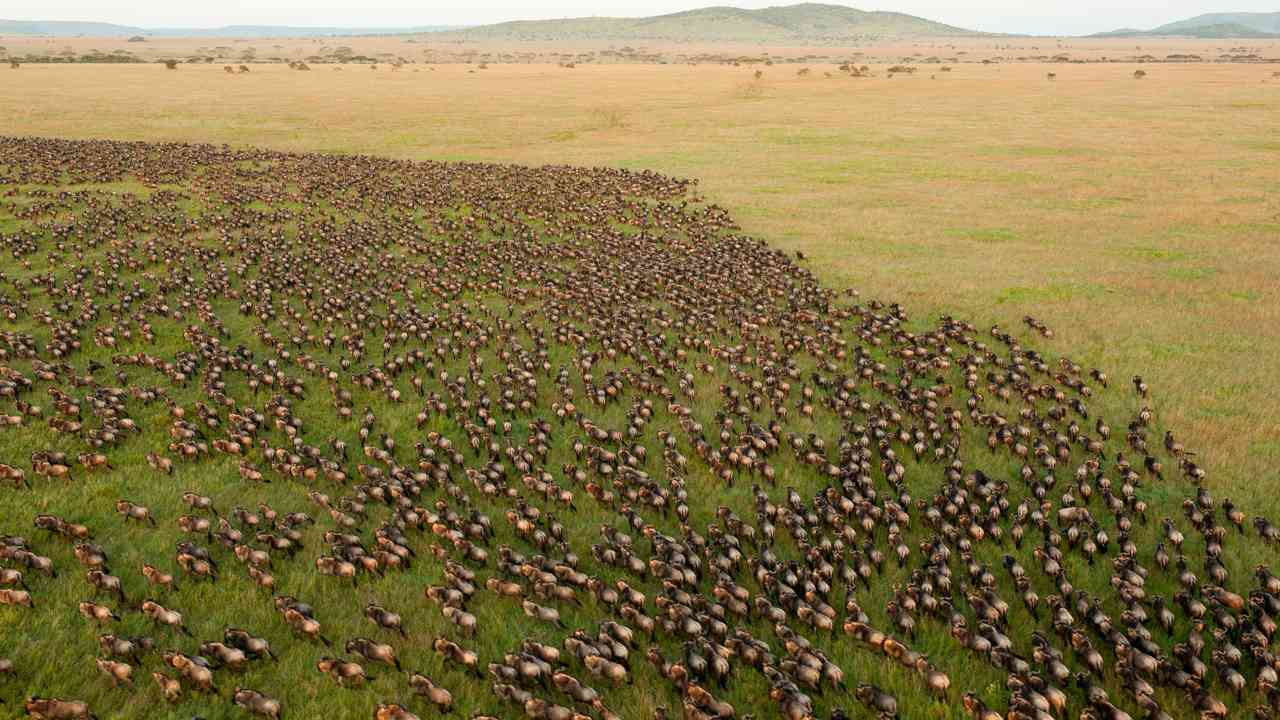 A migration of wildebeest in the Serengeti National Park, Tanzania. Wildebeest are among the most cautious animals in the moonlit grasslands – choreographing their movements to match the available moonlight and minimize their risk of attack by their predators, the African lion. Image: Wikimedia Commons

Advances in the science of social learning in animals and technological advances such as robotics, drones, digital photography and so on must now be effectively and efficiently combined to enhance the existing social networks of as many species as possible. This could reduce their stress and, as a result, spare them from ulcers or worse. Social status is found to be a stressor among rhesus macaques just as it is among humans. The key question is how humans are adding to the natural stressors among social animals and whether humans can actually reduce the additional stress they impose or even reduce natural stress.

Convention on the Conservation of Migratory Species of Wild Animals (CMS) under the auspices of United Nations Environmental Program has been leading a number of consultation processes to gather animal social behavior, knowledge centers, and transmissions to develop and implement policies across the globe on land and oceans.

Understanding the confounding effects of human actions and anthropogenic climate change on the social structures and social learning among animals is imperative for ensuring that earth does not become a planet of fear for them.

Besides, our own SNS calms down when we interact with animals. That means we'll essentially be bringing our own blood pressure down and keep ulcers at bay by conserving wildlife.