Climate emergency is the buzzword at COP25, how do vulnerable countries deal with forced migration?

More than 20 m people are forced to migrate annually due to extreme weather events because of fuelled by climate change.

As the first week of the fortnight-long 25th Conference of Parties (CoP25) to the United Nations Framework Convention on Climate Change (UNFCCC) comes to a close at Madrid in Spain, “climate emergency” is the key phrase emerging from the narratives, highlighting the need for immediate, effective action to deal with changing climate across the world. Even before the heads of state and environment ministers of the participating countries join in the second week, the message that’s emerging at the conference is that the climate is changing in bursts of extreme weather events, not gradually, and that is leading to a global emergency-like situation.

Climate-fuelled disasters such as floods and storms were the number one drivers of internal displacement over the last decade, forcing more than 20 million people a year – one person every two seconds – to leave their homes, said a report launched by Oxfam at the conference. More than 20 million people are forced to migrate due to extreme weather events fuelled by climate change. Around 80 percent of them are in Asia. Image credit: Palani Kumar.

The report states that 80 percent of those displaced in the last decade live in Asia – home to more than a third of the world’s poorest people. “Cyclone Fani triggered the displacement of nearly 3.5 million people in Bangladesh and India in May 2019, most of who were pre-emptively evacuated,” the report noted.

While people from the developed countries are now at risk too, the report by the international non-governmental organisation concluded that people in low and lower-middle-income countries such as India, Nigeria and Bolivia are over four times more likely to be displaced by extreme weather disasters than people in richer countries.

An analysis by the Internal Displacement Monitoring Centre (IDMC), also released this month, found that by the end of the century, up to 50 million people risk being displaced by floods yearly.

According to the Global Climate Risk Index 2020 by German thinktank Germanwatch, which analyses to what extent countries and regions have been affected by impacts of weather-related loss events, India ranks fifth in a list of countries worst affected by extreme weather events in 2018. The report cited the extreme rainfall events and floods in Kerala, cyclones Titli and Gaja that devastated the east coast, heatwaves and water stress across the country. However, the report looks at direct impacts and doesn’t factor indirect impacts such as food scarcity or slow onset events such as coastal erosion that are exacerbated by sea-level rise.

Multiple extreme weather events can break the resilience of communities

Sanjay Vashist, Director of Climate Action Network South Asia, an environmental NGO, said, “Depending on the abilities of the region and the community, people might be able to withstand an extreme event once…or twice…but if it hits the third time and they survive, their resilience will break and that forces them to leave their land.”

Vashist who is attending the COP25 in Madrid, said, “Forced migration costs people their livelihoods, education of children gets hampered, health and social security are at risk, women become more vulnerable…climate change is widening the rich and poor divide.” The World Meteorological Organization (WMO) Secretary-General, Petteri Taalas, at the launch of ‘Provisional Statement on the State of the Global Climate in 2019’, said, “Till 2014, there was a decreasing trend in hunger, but since then, there has been an increase. In the long run, this (hunger) may be the biggest challenge of climate change.”

The report indicates that the average temperature of the globe in 2019 increased by 1.1 degrees Celsius compared to the pre-industrial period.

The Paris Agreement adopted by 187 countries, aims to tackle climate change by reducing carbon emissions and keeping the global temperature rise this century well below 2 degrees Celsius above pre-industrial levels. The current consensus is to keep the temperature increase to below 1.5 degrees Celsius.

Greenhouse gas emissions by developed countries since industrialisation are considered to be a major reason for accelerating climate change. Poor and vulnerable nations have been pushing for support from the rich countries as compensation for the historical damage caused by them.

After more than 20 years of negotiations, the Warsaw International Mechanism (WIM) for Loss and Damage was established after in 2013 at COP19 to address the unavoidable loss and damage associated with impacts of climate. It includes impacts of extreme weather events and slow onset events poor, vulnerable and developing countries and also the displacement of communities.

As reducing greenhouse gas emissions continues to be a key agenda for the climate talks and the Green Climate Fund to help developing countries to limit or reduce their emissions and adapt to the impacts of climate change also falls short of its $100 billion target, one of the issues in spotlight for the next few days of negotiations is how to finance and govern the WIM.

IPCC’s 1.5C report released last year indicated that “the mean net present value of the costs of damages from warming in 2100 for 1.5 degrees C and 2 degrees C (including costs associated with climate change-induced market and non-market impacts, impacts due to sea-level rise, and impacts associated with large-scale discontinuities) are $54 and $69 trillion, respectively, relative to 1961–1990.”

Based on estimates of loss and damage costs in developing countries, a report released by Civil Society Review, suggests new and additional finance of $50 billion should be provided by 2022 and a minimum of $300 billion by 2030.

The Task Force for Displacement, under the WIM, provides advice to avert, minimise and address climate change-induced displacement. It submitted a work plan in early October this year that was approved by the WIM. 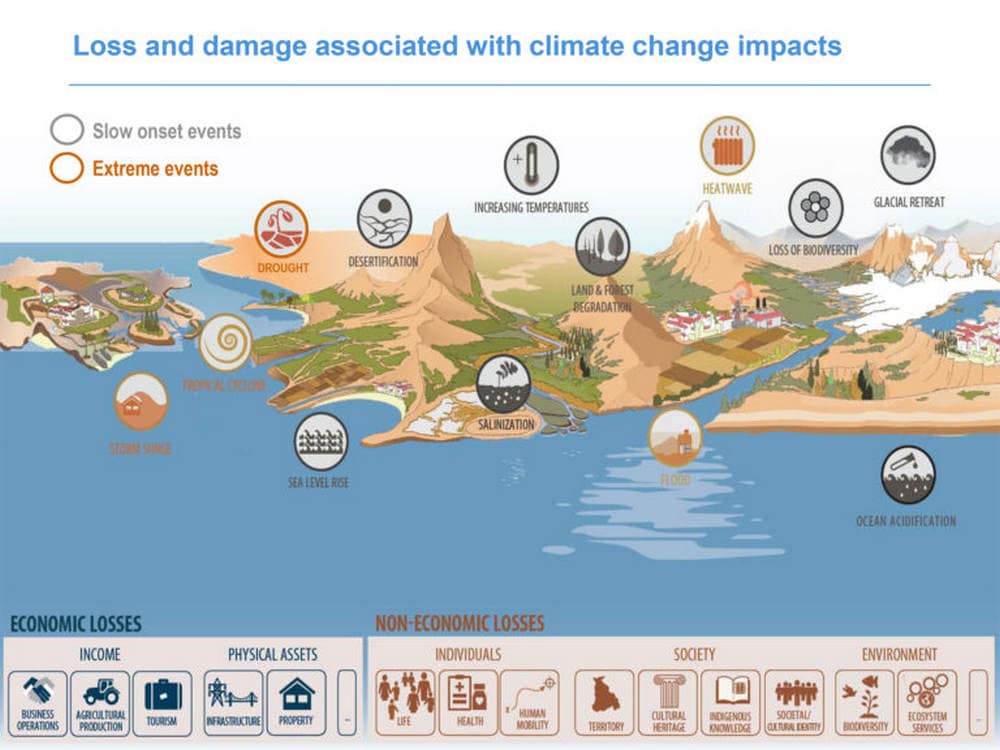 Climate change impacts include economic losses as well as non-economic impacts such as on human mobility. Image credit: UNFCCC.

Harjeet Singh, Global Climate Lead at ActionAid, said, “The work plan covers the aspects of knowledge enhancement and sharing, raising awareness, and other aspects but it is severely lacking in the aspect of finance.”

The Oxfam report “Forced from Home” too, emphasises the lack of progress made by developed countries to financially help the poor countries to cope with the impacts of climate change.

“Finance and support was one of the five mandates for the WIM. If that fails, all the efforts and success achieved in the other four go down the drain,” said Vashist.

The WIM review that took place on December 1, a day before the climate summit began, submitted a work-in-progress paper that suggests to “establish an implementation arm on action and support that includes a technical facility, finance facility and displacement facility.”

As the negotiations on loss and damage continue and the draft undergoes various iterations over the next week, it’s awaited to see how the world reacts to the “climate emergency”.