The catastrophic wildfires in Australia have mounted pressure on politicians, businesspeople, thought leaders and others to show they are part of the solution.

Even before catastrophic fires broke out in Australia in late fall, climate change was at the top of the list of priorities at the 50th anniversary of the World Economic Forum in Davos, Switzerland, this week.

But those fires — preceded by others in California — along with rising sea levels, flooding and supercharged storms, are putting more pressure on the politicians, business executives, financiers, thought leaders and others who attend to show they are part of the solution to one of the world’s most pressing challenges.

In a nod to a younger generation most at risk and demanding action on climate change, Greta Thunberg, the Swedish teenager who has become a prominent environmental activist, is scheduled to appear. In a column this month in The Guardian that she wrote with other environmental activists, they demanded an end to investments in fossil fuels.

“Anything less than immediately ceasing these investments in the fossil fuel industry would be a betrayal of life itself,” they said. “Today’s business as usual is turning into a crime against humanity. We demand that leaders play their part in putting an end to this madness.”

Daniel Yergin, the oil historian and a regular attendee at the Davos forum, agreed that “climate is going to loom larger than ever before.” And Ian Bremmer, founder and president of the political risk firm Eurasia Group, said: “These issues are becoming more real, more salient every day, whether you are talking about Venice or California or Australia or Jakarta. These are real events with enormous direct human and economic costs.” But an overriding question as the Davos gathering gets underway is: Will all the talk matter?

Bremmer, who plans to attend, said the forum could help force change because it brings together big players, like chief executives of banks, money management firms and hedge funds, who are rethinking their investments. Gradually — some say too gradually — financial firms are directing money away from oil companies and others associated with carbon-dioxide emissions blamed for environmental damage.

Financial institutions “see the future coming, and they are changing the way they invest,” Bremmer said. “That is going to require multinational corporations to act differently; it will lead to new corporations that will do better.”

While thinking on climate change may be shifting, by some metrics the corporate elite that always makes up a large contingent at Davos still has a lot of work to do. According to a study published in December by the Davos organizers, only a quarter of a group of 7,000 businesses are setting a specific emissions reduction target and only an eighth are actually reducing their emissions each year.

If so, they are making a major strategic error, according to Mark Carney, the departing governor of the Bank of England who planned to be in Davos. Companies that work to bring their emissions to zero “will be rewarded handsomely,” Carney said in a recent speech. “Those that fail to adapt will cease to exist.”

Some people in the financial industry said that environmental issues were being given greater weight in investment decisions despite setbacks like President Donald Trump’s decision to pull the United States out of the Paris agreement on climate change. The president, who shunned the gathering in Davos last year, said he would go this time. 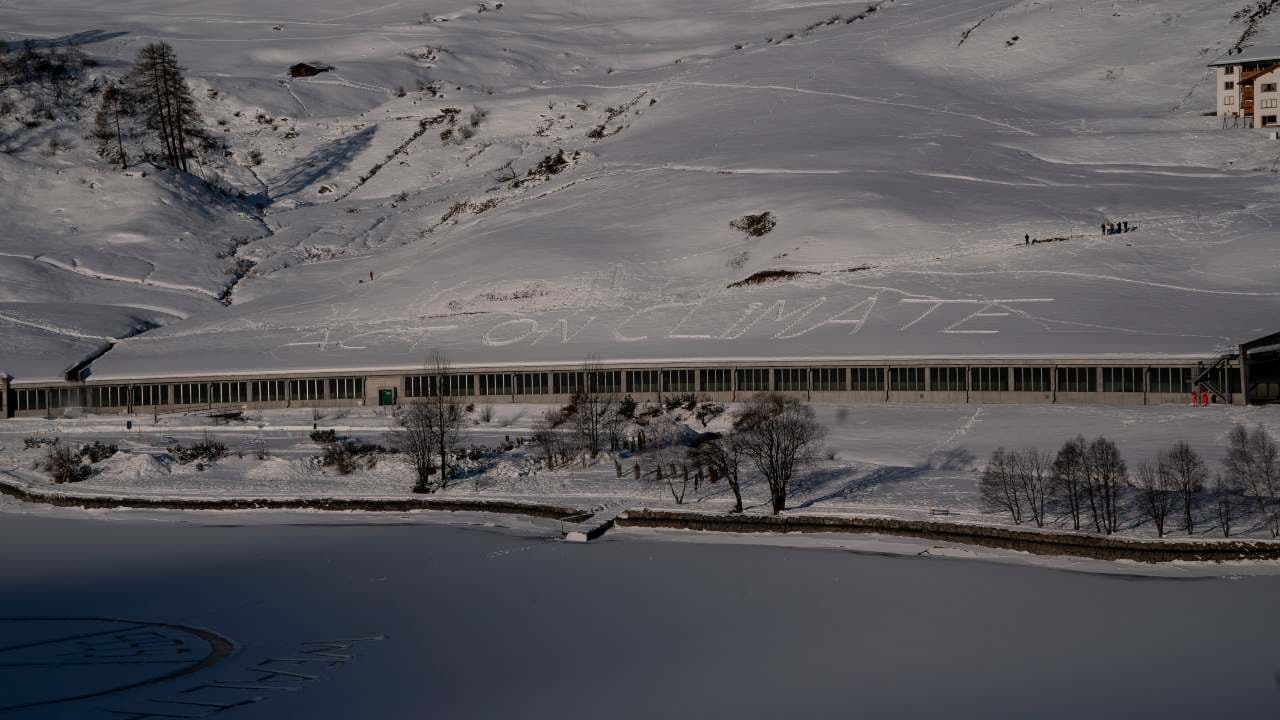 "Act on Climate" is seen written in snow as President Donald Trump, aboard Marine One, flies to the World Economic Forum in Davos, Switzerland from Zurich on Tuesday, 21 Jan 2020. Image: Anna Moneymaker/NYT

The number of people who are talking about fossil fuels as a real concern “has increased dramatically over the last 12 to 24 months,” said Jeff McDermott, chief executive of Greentech Capital, an investment bank focused on low-carbon technologies. “They are both looking at the risks of high-carbon companies and industries as well as the returns available from low-carbon alternatives.”

McDermott said that Davos was a good venue for sifting through such ideas. The conference organizers are also pushing an environmental agenda that supports an ecologist’s notion of persuading the world to plant 1 trillion trees to soak up carbon dioxide and prodding companies to announce ambitious targets for lowering their emissions.

Potentially, enormous sums could be used to influence corporate behavior. For instance, Climate Action 100+ said investors with around $35 trillion in assets had signed on to its program for pushing companies toward greater disclosure and action on emissions.

“I believe we are on the edge of a fundamental reshaping of finance,” wrote Laurence D. Fink, chief executive of BlackRock, which has nearly $7 trillion under management, in a letter vowing to put sustainability at the core of the firm’s investment approach.

Many likely targets of investor and environmental initiatives may be available at the gathering at the Swiss resort. Among them are the chiefs of the world’s major oil companies, including Royal Dutch Shell, BP, Chevron and Saudi Aramco, who are expected to attend.

In recent months, some of these companies, especially those based in Europe, have been responding to the concerns of investors and other constituents with commitments to reduce their emissions or make investments in other environmentally friendly technology.

Repsol, the Spanish oil company, pledged last month to cut its emissions to zero by 2050 through a combination of actions, including more investments in renewable electricity like wind and solar and, possibly, reforestation. And BP, the London-based oil company, said it was forming a business with other companies for recycling a type of plastic known as PET that is used in soft drink bottles and packaging. In the latest of these pledges, Equinor, the Norwegian company, said it would reduce emissions from its oil and gas fields and plants in its home country to near zero by 2050 by using electricity in its operations and other measures.

Yergin, who is also vice-chairman of IHS Markit, a research firm, said that “energy transition” would be the “two most spoken words at Davos” about the sector.

Marco Alverà, chief executive of Snam, an Italian natural gas company, plans to talk about recent experiments in mixing hydrogen, a fuel that does not produce carbon emissions, with the natural gas that the company delivers to users, potentially lowering their climate effect. Alverà said he was going to Davos because he thought it would be a “powerful forum” to make his points.

“I don’t think we will solve the climate challenge with taxes or a radical change in consumer behavior,” he said. “I think we can only solve it with business ideas that make business sense.” 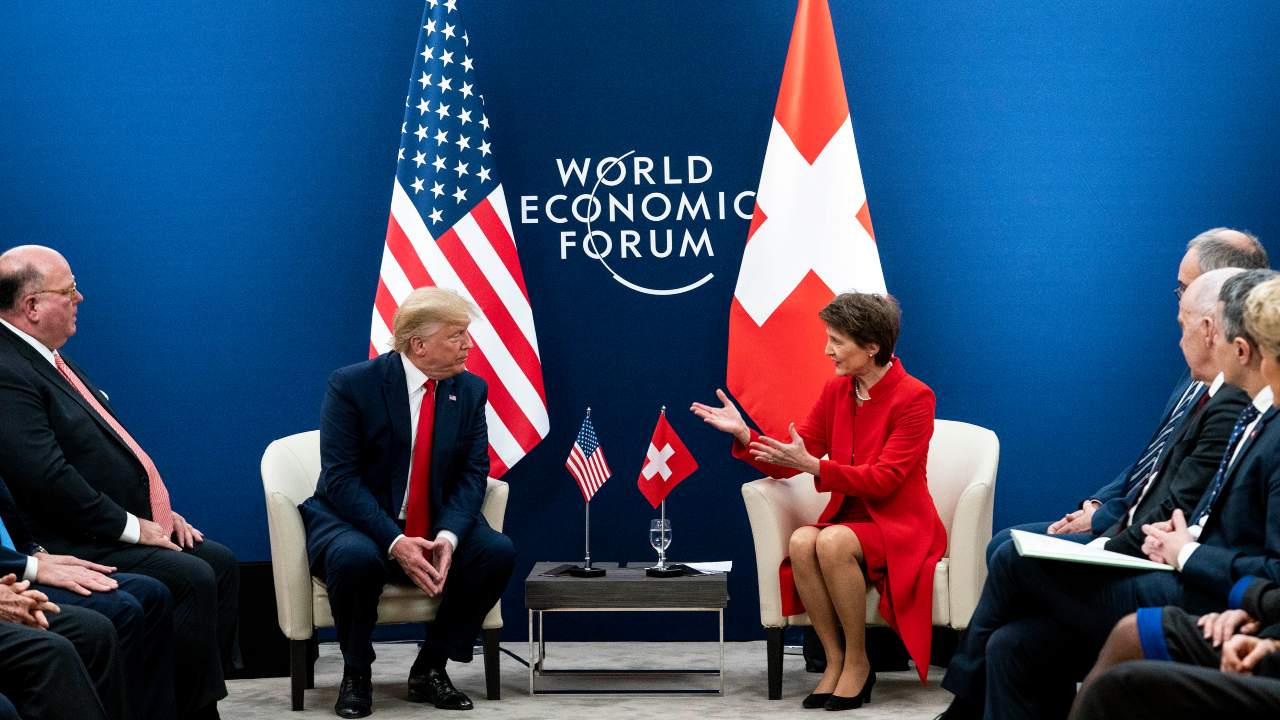 President Trump meets with Simonetta Sommaruga, president of the Swiss Confederation, at the WEF in Davos, 21 Jan. Image: Anna Moneymaker/NYT

The chemical industry, another sector that is integral to modern economies and a target for environmentalists, also plans to make its case at Davos.

A group of about 20 large chemical companies is working on low-carbon technologies, like making chemicals from carbon dioxide and biomass, said Martin Brudermuller, chief executive of the German chemical company BASF.

Brudermuller also said another large coalition in the sector was working on the plastic waste problem, with BASF turning discarded plastic into raw materials for its plants. Brudermuller cautioned that such problems, which involve not only new technologies but also organizing the collection and sorting of waste, are so complex and globe-spanning that only an effort of similar scope will succeed in solving them.

“A collaborative effort of companies, governmental and non-governmental organizations, as well as civil society, is necessary to address the global challenge of mismanaged waste,” Brudermuller wrote in an email.

Awareness of these issue may be growing, but with global emissions continuing to rise governments are falling short on tackling them, according to a preconference report issued by the World Economic Forum. Many businesses, too, are failing to set effective targets, the report said.

In 2006, Nicholas Stern was the chief author of a seminal study for the British government that set out the case for acting on climate change. More than a decade later, as he prepared to attend the 50th gathering in Davos, Stern, chairman of the Grantham Institute at the London School of Economics, said there were reasons to be encouraged and to worry.

He said that the costs of wind and solar technology had fallen much more rapidly than anticipated. Electric vehicles, he said, were also making more rapid progress than expected, with most automakers talking about the end of the era of the internal combustion engine. Such advances, he said, are opening attractive opportunities for investors and creating jobs.

He also said the growing activism of young people was crucial in pushing their elders to enact change. “Business people really feel that,” including those who attend Davos, he said, adding that he hoped such pressures would push companies into making commitments on emissions reduction at the meeting.

On the other hand, he said that the world had been slow to act and each report from the Intergovernmental Panel on Climate Change, the United Nations agency that tracks emissions, was more worrying than the last.

“I am really optimistic about what it is possible to do,” he said. “But I worry deeply about whether we will.”