No season is as central to Indian life and lore as the monsoon. It turns up in ancient Sanskrit poetry and in Bollywood films. It shapes the fortunes of millions of farmers who rely on the rains to nourish their fields. It even has its own music.

After years of drought, a struggling farmer named Fakir Mohammed stares at a field of corn ruined by pests and unseasonably late rains. Rajeshree Chavan, a seamstress in Mumbai, has to sweep the sludge out of her flooded ground-floor apartment not once, but twice during this year’s exceptionally fierce monsoon. The lakes that once held the rains in the bursting city of Bengaluru are clogged with plastic and sewage. Groundwater is drawn faster than nature can replenish it.

The rains are more erratic today. There’s no telling when they might start, nor how late they might stay. This year, India experienced its wettest September in a century; more than 1,600 people were killed by floods; and even as the traditional harvest festivals rolled round in October, parts of the country remained inundated. 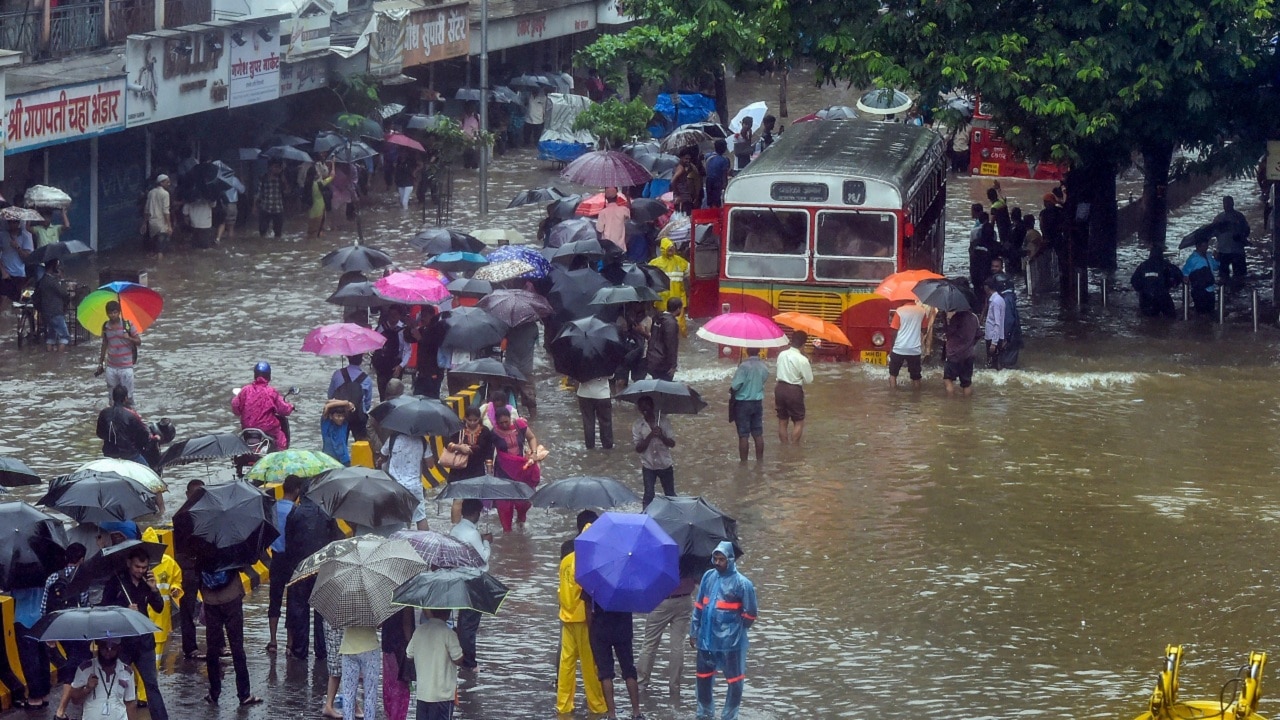 Even more troubling, extreme rainfall is more common and more extreme. Over the past century, the number of days with very heavy rains has increased, with longer dry spells stretching out in between. Less common are the sure and steady rains that can reliably penetrate the soil. This is ruinous for a country that gets the vast share of its water from the clouds.

The problem is especially acute across the largely poor central Indian belt that stretches from western Maharashtra state to the Bay of Bengal in the east: Over the past 70 years, extreme rainfall events have increased threefold in the region, according to a recent scientific paper, while total annual rainfall has measurably declined.

“Global warming has destroyed the concept of the monsoon,” said Raghu Murtugudde, an atmospheric scientist at the University of Maryland and an author of the paper. “We have to throw away the prose and poetry written over millennia and start writing new ones!”

India’s insurance policy against droughts, the Himalayas, is at risk, too. The majestic mountains are projected to lose a third of their ice by the end of the century if greenhouse gas emissions continue to rise at their current pace.

But, as scientists are quick to point out, climate change isn’t the only culprit to blame for India’s water woes. Decades of greed and mismanagement are far more culpable. The lush forests that help to hold the rains continue to be cleared. Developers are given the green light to pave over creeks and lakes. Government subsidies encourage the over-extraction of groundwater.

The future is ominous for India’s 1.3 billion people. By 2050, the World Bank estimates, erratic rainfall, combined with rising temperatures, stand to “depress the living standards of nearly half the country’s population.”

The Marathwada region, stretching out across western India, is known for its cruel, hot summers. Hardly any rivers cut through it, which means that Marathwada’s people rely almost entirely on the monsoon to fill the wells and seep into the black cotton soil.

Marathwada is also an object lesson in how government decisions that have nothing to do with climate change can have profoundly painful consequences in the era of climate change.

In October, just weeks before the traditional harvest season, Fakir Mohammed led me through his family’s 1-1/2-acre plot of land. A neem tree stood in the middle of the fields. Lie under it, Mohammed said with pride, and you’ll never get sick.

A girl walks across the cracked dry ground in the village of Charam in Uttar Pradesh, India, June 14, 2019. By Bryan Denton c.2019 The New York Times

The same could not be said of his land.

The rains had been deficient for most of the past nine years. This year, they came late, and when they came, the thirsty ground drank everything.

Then, an infestation of fall armyworm attacked Mohammed’s corn. The millet was ravaged by a fly. The cotton had flowered, but Mohammed could tell it would be a paltry harvest. “We worked very hard,” he said. “But we’ll get nothing out of this.”

Worse, the rains this year did nothing to solve the community’s drinking water shortage. Even at the end of the monsoon, Mohammed’s well was dry. A dam nearby, built to supply drinking water to his village and nearly 20 others, had turned to scrubland, fit only for a few skinny cows to graze.

Water is so precious that the women of his family said they drank half a cup if they wanted a whole one. They went without a daily shower so their children could go to school clean and fresh. When their nerves were frayed, they smacked a child who spilled a cup by accident.

Every day, four government trucks came down the muddy lane to fill the village water tank, which met a fraction of what the village needs. Most people bought drinking water from far away.

Mohammed was grateful for whatever the clouds had to give this year, but he was also anxious. “There’s no water to drink, but at least it’s good for the fields,” he said. “I’m scared in my heart. I don’t know what’s going to happen in the future.”

Mohammed, who says he is around 60, is not wrong to worry. Since 1950, annual rainfall has declined by 15 percent across Marathwada, according to an analysis by Roxy Mathew Koll, a monsoon specialist at the Indian Institute of Tropical Meteorology. In that same period, cloudbursts have shot up threefold.

But here’s what’s shocking. Also during that same period, Marathwada, along with the rest of India, has seen a boom in the production of one of thirstiest crops on Earth: sugar cane.

Down the road from Mohammed’s village, on land that gets water from an upstream dam, farmers had planted acres and acres with sugar cane. Why? Because sugar mills had sprung up across the state, some owned by politicians and their friends. They were ready to pay handsomely for cane.

Bizarrely, the taxpayers of India, one of the most water-stressed countries in the world, have aided sugar producers handsomely. The government subsidises electricity, encouraging farmers to pump groundwater for their sugar cane fields, as well as fertilisers, which are used in vast quantities for sugar. State-owned banks offer cheap loans, which are sometimes written off, especially when politicians are courting farmers’ votes. This year, the government has approved nearly $880 million in export subsidies for sugar mills.

With all those perks, sugar cane production has grown faster than any other crop since independence from British rule in 1947, making India the world’s biggest sugar producer, according to an analysis by Ramanan Laxminarayan, a researcher at the Princeton Environmental Institute. Three-fourths of irrigated sugar cane production takes place in areas under “extremely high water stress,” the World Resources Institute found.

In October, just before the Hindu festival to mark the harvest, another Marathwada farmer named Ashok Pawar sent me pictures of ruin: Freakish rains had washed away his soy and mung beans. No one in his village had seen anything like it so late in the season.

The image of the potbellied Hindu god, Ganesha, that hangs above Savita Vilas Kasurde’s narrow doorway is intended to keep obstacles away from her family’s path.

The same cannot be said for the Mithi River, which flows a few steps from Kasurde’s door. Its path has been blocked every which way as it winds through this city of 13 million people.

Mumbai’s international airport straddles the Mithi; you can see the planes taking off from Kasurde’s street. Sewage and rubbish pour into the Mithi. A vast spread of high-rises has been built on land reclaimed from the Mithi, along with higgledy-piggledy working-class enclaves like this one, perched precariously on its edge. They are the ones that flood first and flood worst after heavy rain. The city’s other natural defence against floods, mangrove trees, have been pulled out to make room for concrete.

A resident sits on top of a dumpster surrounded by flood waters in the Scion neighborhood, along the Mithi River, of Mumbai, India, Aug. 4, 2019. By Bryan Denton c.2019 The New York Times

Kasurde is a seasoned veteran. When the water rises, she hauls her fridge on top of the highest table, unplugs the television, wraps her children’s school books in plastic. When the water is up to her knees, she takes it all upstairs to the second-floor bedroom. The power goes out when it rains hard. Going to the shared neighbourhood toilet means wading through fetid waters. “We just sit in the dark,” Kasurde said.

Mumbai got more rain this year than it had in 65 years, and several times this season, it came in exceptionally heavy downpours. The drains overflowed. The lanes filled with muck. Commuter trains were disrupted. Flights were diverted. Several times in Kasurde’s neighbourhood, schools turned to storm shelters. Those without an upstairs room sloshed through the water to get there.

After each flood, as the waters began to recede, they returned to cover their noses and sweep the water and sludge out of their homes. Mosquitoes can breed in the puddles of dirty water. A dengue outbreak was the last thing they needed.

This is what worried Rajeshree Chavan nearby when I saw her in the middle of the monsoon. She had managed to save her sewing machine, the source of her livelihood, twice this year when her ground floor room flooded. She had to throw away a sack of rice and her kids’ clothes.

It infuriated her that politicians came through only when they were trolling for votes. Even the state’s top politician was here earlier in the year, she said. He wanted the neighbourhood’s support for the governing Bharatiya Janata Party, she recalled. He promised new houses for people on higher ground, in the northern suburbs of the city. He left after giving symbolic plastic keys to five families.