China has developed its space program rapidly since it conducted its first crewed mission in 2003.

China showed off its Mars spacecraft during a landing test Thursday as the country pushes for inclusion in more global space projects.

The demonstration of hovering, obstacle avoidance and deceleration capabilities was conducted at a site outside Beijing simulating conditions on the red planet, where the pull of gravity is about one-third that of Earth. 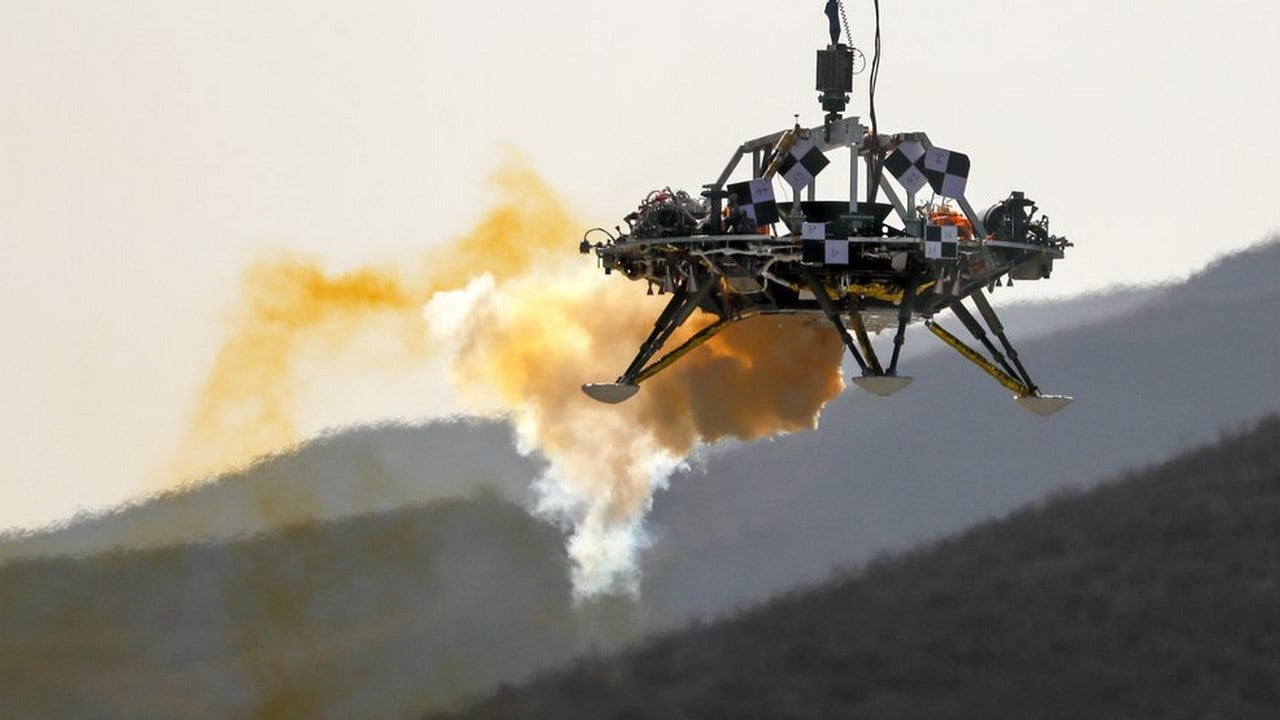 A lander is lifted during a test of hovering, obstacle avoidance and deceleration capabilities at a facility in Huailai in China's Hebei province. Image credit: AP

China’s burgeoning space program achieved a lunar milestone earlier this year by landing a spacecraft on the mysterious far side of the moon.

It has developed rapidly, especially since it conducted its first crewed mission in 2003, and has sought cooperation with space agencies from Europe and elsewhere.

The U.S., however, has banned most space cooperation with China out of national security concerns, keeping China from participating in the International Space Station.

Despite that, China’s ambitions continue to grow as it seeks to rival the U.S., Russia and Europe in space and cement its position as a regional and global power. It is gradually constructing its own larger, more permanent space station in which it has invited foreign participation.

The lander on Thursday successfully avoided ground obstacles during a simulated low-gravity descent, according to the China Aerospace Science and Technology Corporation, the Chinese space program’s main contractor.

The refrigerator-sized craft was lowered gently on 36 cables through the air for about a minute and used onboard jets spraying rust-coloured fumes to alter its downward course. China plans to launch a lander and rover to Mars next year to explore parts of Mars. Image credit: AP

“After the probe is launched, it will take about seven months to reach Mars, and the final procedure of landing will only last about seven minutes, which is the most difficult and the most risky part of the whole mission,” said the Mars mission’s chief designer, Zhang Rongqiao, standing before the 140-mete -tall testing facility.

Many Mars-bound spacecraft launched by the U.S., Russia and other countries have been lost or destroyed over the years. Only the U.S. has pulled it off and has made eight successful landings.

The remote test site lies an hour north of the Great Wall from Beijing.

Guests at Thursday’s event came from 19 countries and included the ambassadors of Brazil, France and Italy.

“This event is the first public appearance of China’s Mars exploration mission, also an important measure for China to pragmatically carry out space international exchanges and cooperation,” the China National Space Administration said in a statement.