The Chinese lunar probe consists of four separate modules working together - the orbiter, returner, the lander and the ascender - to bring the rocks back to Earth.

China becomes the second country to raise its flag on the moon, fifty-one years after the USA hoisted its flag on the moon's surface in the Apollo 11 mission. The flag was unfurled from the Chang'e 5 lander before the ascent module lifted off the moon's surface, and docked to the orbiter and service module orbiting the Earth. The spacecraft is now returning to Earth, bringing along with it the first samples of moon rock after nearly 40 years, since the US and Russian moon missions returned samples for study.

The orbiter and re-entry vehicle will circle the moon for another week, awaiting a narrow time window to make the roughly three-day, 3,83,000-kilometer journey back to Earth, The Associated Press reported. It will first "bounce" off the Earth’s atmosphere to slow its speed before the reentry vehicle separates and floats down on parachutes to land.

Footage of the ascent vehicle lifting off from the Moon and back into space pic.twitter.com/yJfeVNi6Bo

While China has kept mum about the landing date, media reports state that the spacecraft will land anytime between 16-17th December, somewhere in Inner Mongolia.

The Chinese flag on the moon is a specially designed fabric flag that took Chinese scientists a year to get right. According to a report by CGTN, the harsh weathers on the moon would cause any ordinary flag to decompose and the colour to fade very quickly due to the "strong electromagnetic radiation and the huge temperature difference between day and night on the surface of the moon". 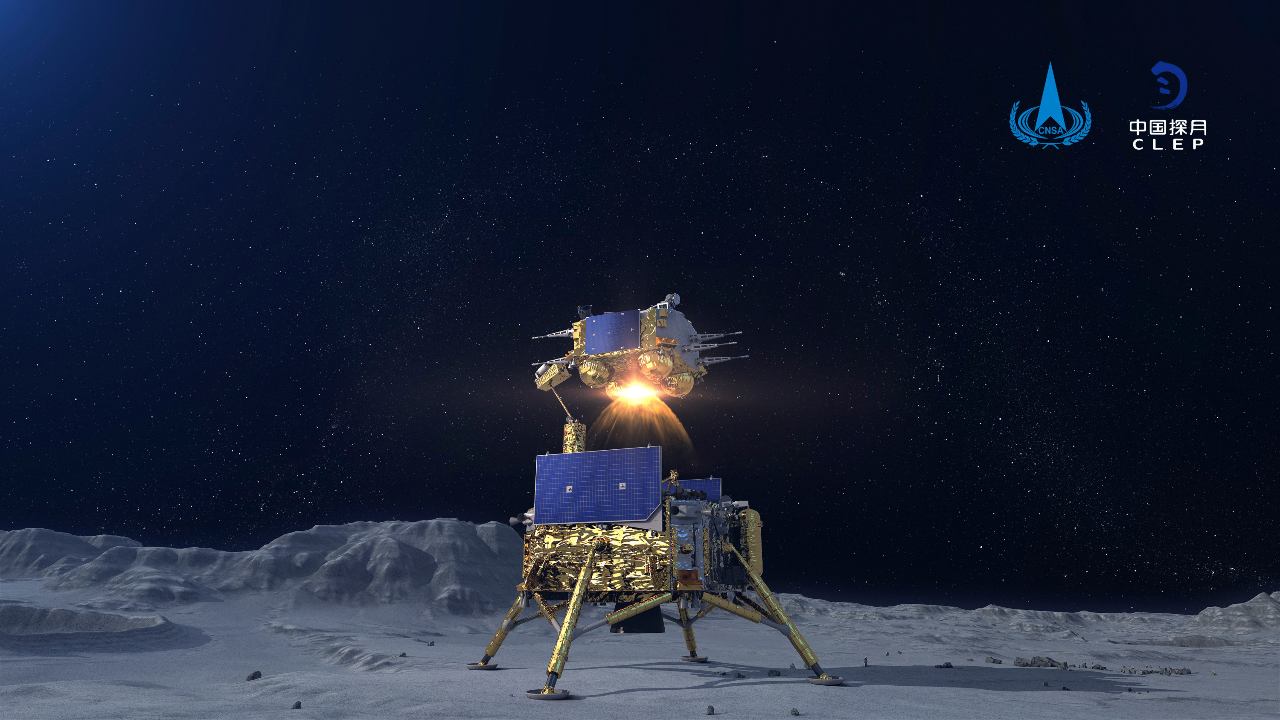 A simulated image of the ascender of Chang'e-5 spacecraft blasting off from the lunar surface at the Beijing Aerospace Control Center (BACC) in Beijing on 3 December 2020. The Chinese lunar probe lifted off from the moon Thursday night with a cargo of lunar samples on the first stage of its return to Earth, state media reported.
Image credit: China National Space Administration/Xinhua via AP

NASA agrees that the six flags left behind by its own astronauts are most likely bleached out and even disintegrating from a combination of solar radiation and the alternating 14 days of sunlight, when temperatures go up to 100° C, with 14 days of darkness, when the temperature can drop to -150° C. 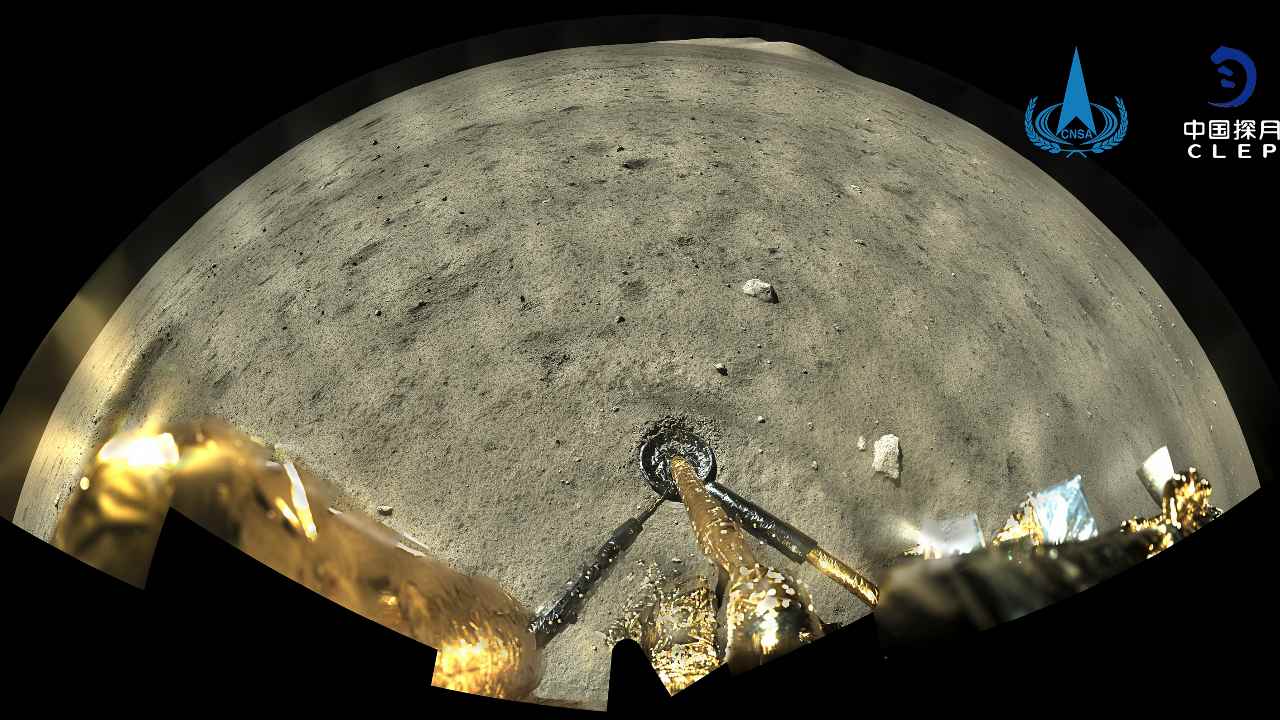 The flag is two-meter wide and 90 cm tall. The entire configuration that holds up the flag weighs less than one kg in total. And since Chang'e 5 is an unmanned mission, all this was done by a robotic arm.

Chang’e 5 – named for the Chinese moon goddess – was launched on Wednesday, 25 November at 2.00 am IST (Wednesday, 25 November 4.30 am BJT) from the Wenchang Space Center on the southern island province of Hainan. The lander/orbiter duo was hoisted atop the massive Long March-5Y rocket. This is the third time that China has placed a robotic spacecraft on the moon.

Since China already has an active rover on the dark side of the moon, this mission proved all-the-more helpful. With Chang'e-5, China has tested out new technologies –for functions like navigation, landing, docking in space and re-entering earth – that will be useful for future missions to the Moon and Mars. These will also help with crewed missions in the future.

Chang'e-5 has also brought back lunar rock and dirt, which will help us understand the moon and the solar system better. The rocks that the Chinese mission is bringing are thought to be newer, at least as compared to the rocks brought back by the US, that were around 3.2 billion years old and it will also help us more accurately date the moon.

The process of collecting the rocks and dirt samples, which was planned as a two-hour exercise, was completed it 19 hours. The probe drilled two meters into the sub-surface of the moon while also collecting surface rocks, weighing roughly two kilograms. These were sealed into a container then loaded on the ascent module that blasted off from the moon. The ascent module in the lander made its rendezvous with the orbiter on Sunday, 6 December at 3.12 am IST (5.42 am BJT, local time) where it transferred the sample container to the returner capsule.

According to Xinhua report, the orbiter-returner module will separate from the ascending module and wait for the right time to start its journey back to Earth.

The Chang'e-5 probe consists of four separate modules working together to bring the rocks back to Earth. These include the orbiter and returner (which were orbiting the moon), the lander and ascender (which landed on the moon). The lander is still on the moon's surface. While not much is known of its mission objectives after the rock collection, a report by Phys.org states that it could last on the moon for 14 Earth days (one lunar day) before it becomes inoperable.

Also read: China's Chang'e 5 completed drilling into the moon almost two days after landing on the ocean of storms