The images also include a wide view of the entire North Polar region from a distance.

On 23 August 2019, from an altitude of almost 4,375 kilometres, the Chandrayaan 2 spacecraft returned photographs of the lunar surface. Among the features visible in these new images are prominent craters such as Jackson, Mitra, Mach, and Korolev.

Jackson is a 71-kilometre-wide impact crater located in the northern hemisphere of the Moon's far side.

Located at 22.4°N and 163.1°W (see inset), Jackson has some interesting, visible features — its well-defined outer rim, polygonal shape and radial streaks of fine ejecta thrown out during the formation of an impact crater (called a 'ray system'). At the western outer rim of a large crater (Mach) on the far side of the moon is another impact crater known as Mitra. At 92-kilometre wide, this heavily-eroded formation has an outer rim that has been damaged by subsequent impacts time and again.

The crater gets its name from Professor Sisir Kumar Mitra, an Indian physicist and Padma Bhushan recipient, who was known for his pioneering work in the field of ionosphere and radiophysics, ISRO shared in a release.

A large, plain lunar impact crater on the Moon's far side, the Korolev, named after Soviet rocket engineer Sergei Korolev. The northern part of its floor cuts across the moon's equator.

The Korolev crater, like Mach, is a 437-kilometre wide crater that has many small craters of varying sizes. One interesting feature about the Korolev crater is the concentric inner crater within the larger, more visible rim.

Impact craters such as Sommerfeld and Kirkwood are visible in a second image taken by the TMC-2 on 23 August, from an altitude of ~4,375 km. 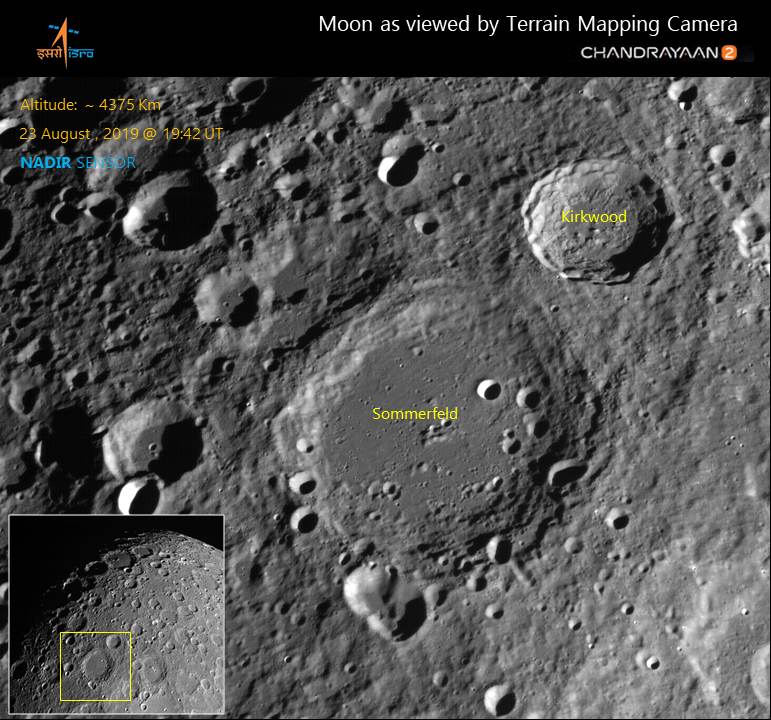 Sommerfeld is the largest impact crater located in the far side, northern latitudes of the Moon. The 169-kilometre-wide crater is located at 65.2°N and 162.4°W on the moon's

It has a relatively flat interior surrounded by a ring mountain and a number of smaller craters lining the rim edge.  The crater is named after Dr Arnold Sommerfeld who is a German physicist who did pioneering work in the field of atomic and quantum physics.

Northeast of the Sommerfeld crater lies the Kirkwood crater, named after American astronomer Daniel Kirkwood. The 68-km-wide, well-formed impact crater displays very little signs of wear. Neither the interior nor the outer rampart is marked by any notable craters.

In a third image, the Terrain Mapping Camera 2 (TMC-2) on Chandrayaan 2 captured a wide shot featuring many important features in the lunar north pole, as on 23 August, 4,375 kilometres from the surface. 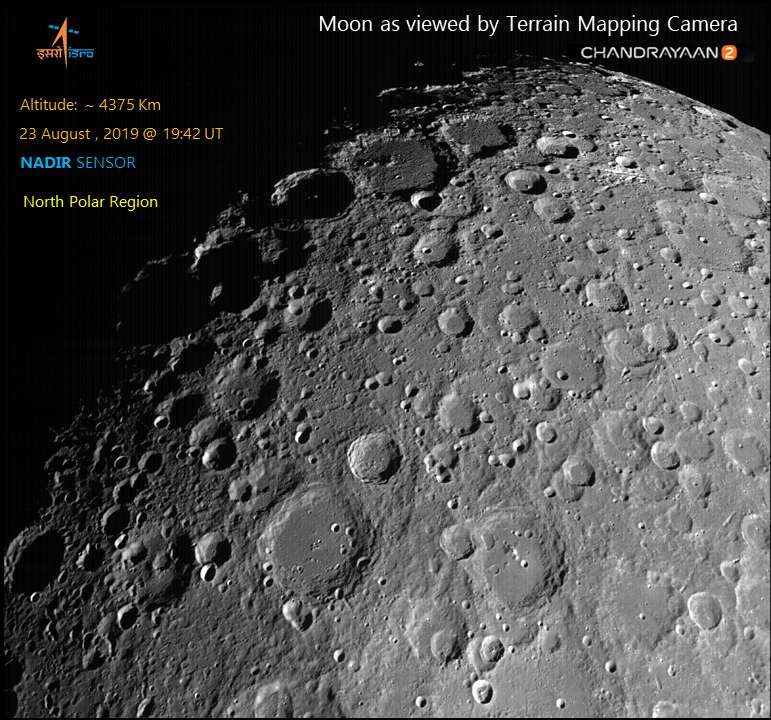 Some of the prominent craters visible in the image are Plaskett (109-km wide), Rozhdestvenskiy (177-km wide) and Hermite (104-km wide — one of the coldest spots in the solar system at ~25 degrees Kelvin, or -248 degrees Celsius).

The third and final image shared in the series of photos is a wide view of the North Polar region, taken by the TMC-2, 4,375 km from the surface.

Chandrayaan 3: India's second attempt to land on the Moon planned for November 2020