Also referred to as a 'gas held prisoner by lava', Argon 40 can be used to date lava flow that is between a million and billion years old.

From an altitude of roughly 100 kilometres, the Chandrayaan 2 mission's orbiter has detected Argon-40 in the gaseous envelope around the moon, the Indian Space Research Organisation (ISRO) announced on Thursday. A specialised instrument on the orbiter, the Chandra's Atmospheric Composition Explorer-2 (CHACE-2), made the finding during a study of the thin lunar exosphere, its composition, and distribution.

"The CHACE-2 payload aboard the Chandrayaan-2 orbiter has detected Argon-40 from an altitude of approximately 100 kilometres," ISRO said in a tweet.

#ISRO
The CHACE-2 payload aboard the #Chandrayaan2 orbiter has detected Argon-40 from an altitude of approximately 100 km.

Here's the schematic of the origin and dynamics of Argon-40 in lunar exosphere pic.twitter.com/xrFDblq2Mt

The gas envelope around the Moon known as the 'lunar exosphere' is tenuous, with weak forces and the gas atoms in it rarely colliding with each other. On Earth, the atmosphere near (the mean) sea level has ~10^19 atoms every cubic centimetre of volume. The lunar exosphere, however, has ~ 10^4 to 10^6 atoms per cubic centimetre. Argon 40 is an isotope, belonging to the class of unreactive, inert gases dubbed 'noble gas'. Argon is also an important component in the lunar exosphere. Sometimes referred to as a "gas held prisoner by lava", Argon 40 can be used to date lava flows whose age is between a million and a billion years. It originates from the radioactive disintegration of Potassium-40 (K 40).

The radioactive K 40 atom, which is present deep below the lunar surface, disintegrates to 40Ar, which, in turn, diffuses through the intergranular space and makes way up to the lunar exosphere through seepages and faults. 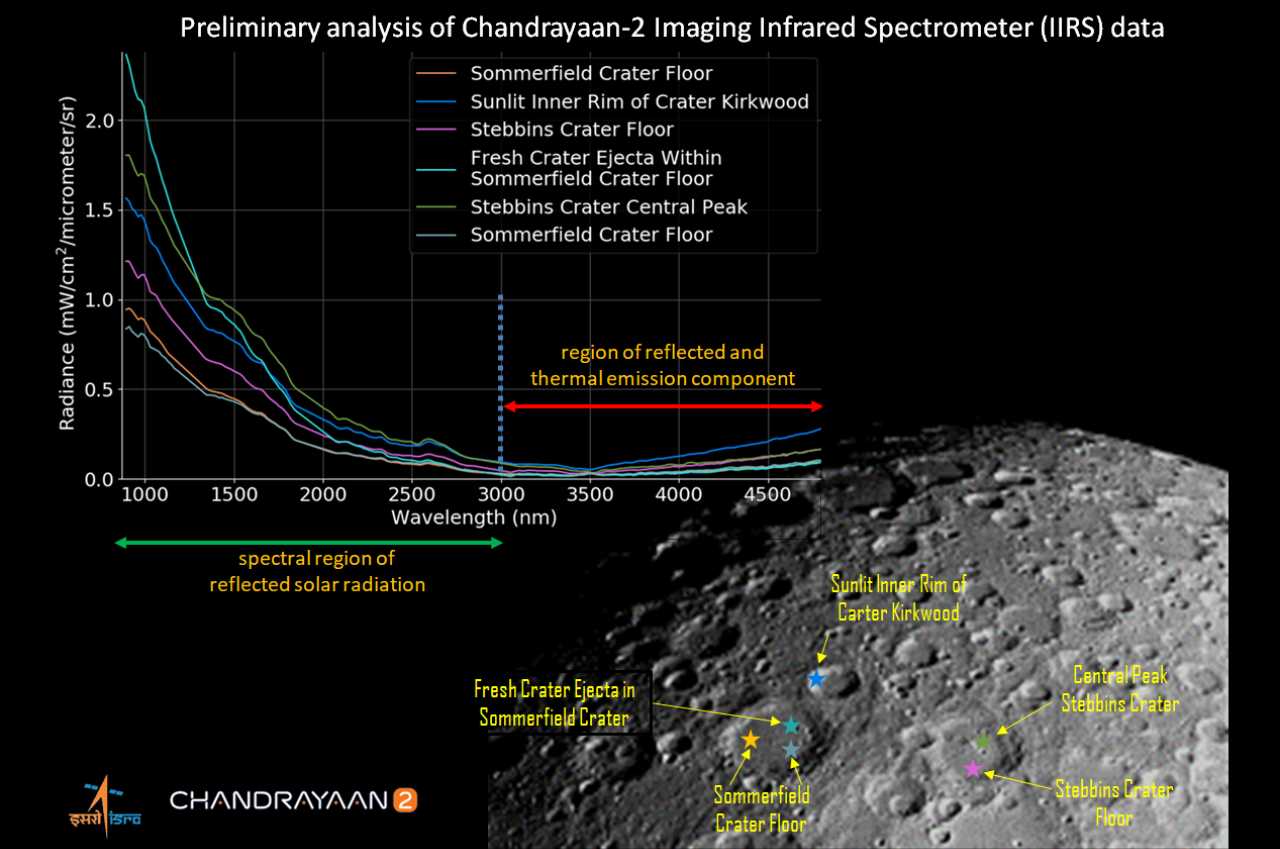 The image below is to look at the northern hemisphere that shows several craters including Sommerfield, Kirkwood, and Stebbins. ISRO also carried out a preliminary analysis, it was established that the IIRS was able to measure the variations in the reflected solar radiation that bounces off the lunar surface from different kinds of surface types. This includes central peaks on craters, crater floors, and also the sun-illuminated inner rims of craters.