India is aiming to be the fourth country to land on the lunar surface after the USA, Russia and China. This mission, called Chandrayaan 2, has three important components — the Orbiter, the Lander Vikram and Rover Pragyan. The Orbiter and the Lander will be tucked into the GSLV Mk-III rocket, which will essentially hurl them at the moon. Very precisely and scientifically of course.

After the rocket reaches space, the fairing i.e. the uppermost portion of the rocket, separates and releases its payload. The orbiter-lander module will conduct a series of five complex manoeuvres around the Earth to build up momentum and slingshot itself closer to the moon. When the duo are captured by the moon’s orbit, the lander will detach itself from the orbiter to make a soft landing on the moon and will then release the rover onto the lunar surface. The orbiter will continue to orbit the Moon for a year, all while scanning and mapping the surface.

The orbiter has eight instruments fitted into it and seven of them are India’s. NASA has one payload onboard called the Laser Retroreflector Array (LRA) that will last for much longer than the Chandrayaan 2 mission.

Two of the instruments are similar to those on Chandrayaan 1 – the Terrain Mapping Camera-2 (TMC-2) and the Miniature Synthetic Aperture Radar (Mini SAR). The Mini SAR instrument on Chandrayaan 1 was developed by NASA and it worked in only S-band frequencies with Hybrid Polarimetry. However, the dual-frequency SAR instrument developed by India can simultaneously map the surface in both L- & S-band frequencies with full polarimetric capabilities (the ability to study the optical activity exhibited by inorganic and organic compounds). The TMC-2 will map the lunar surface and help to prepare 3D maps of it. The SAR will also map the surface while studying the water-ice in the South Pole and thickness of the lunar dust on the surface.

The Dual Frequency Radio Science (DFRS) will study the density of the electrons in the moon’s ionosphere i.e. the uppermost part of the atmosphere that is ionized by radiation. An imaging IR Spectrometer will try to identify minerals and indicators of hydroxyl and water molecules.

The orbiter has a high-resolution camera (OHRC) that ensures that the lander makes a safe touchdown on the lunar surface by taking 3D images of the landing site. These images serve a dual purpose as they will be used to study the surface as well. 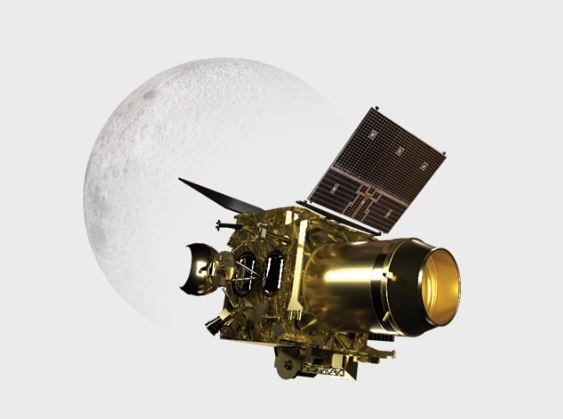 The Solar X-ray Monitor (XSM) measures the intensity of the solar rays and the outer most part of the atmosphere or its corona. CLASS or the Chandrayaan 2 Large Area Soft X-ray Spectrometer measures the light absorbed by the Moon and will check for different metals that are present in its spectrum.

The orbiter has one more important task, which is to communicate the findings of the rover. However, the rover is not directly linked to the orbiter and will transmit the findings via the lander. The orbiter will circle the Moon at an altitude of 100 kilometres.