Niti Aayog member VK Paul has said that mixing COVID-19 vaccines is plausible, but "there need to be more studies."

Facing a shortage of COVID-19 vaccines and long delays in shipments, countries are looking at other options to get their citizens inoculated at the earliest. By signing multiple contracts and getting indigenous pharma companies to produce the vaccines, countries will be able to bridge the gap to a certain extent. And while it is easy to vaccinate people with two doses of these new vaccines, what happens to those who have already got their first dose? Keeping that in mind, health experts and officials are looking at mixing vaccines doses from two different companies to try and give their people protection against the deadly coronavirus. A health worker shows the empty Covishield vaccines for COVID-19 after administers at the press club in Gauhati, AP

In India, the Centre has said that vaccine mixing is theoretically possible, but there isn't enough evidence to back up this idea and execute it in the real world.

Niti Aayog member VK Paul told Hindustan Times, "It is plausible. But there need to be more studies. It can't be said definitively that mixing of doses can be practiced. There is no robust scientific evidence. Only time will tell whether it will be done in the future or not. It will depend on international studies, World Health Organisation findings, etc. Our experts are also continuously studying."

"One shot of one type produces antibodies, and the second shot from another (vaccine manufacturer) will increase that. Scientifically, there is no problem," Paul added. A health worker readies a COVID-19 vaccine as another comforts an elderly woman at a health center in Bahakajari village in an interior part of Indian northeastern state of Assam, India, Image credit: AP Photo/Anupam Nath

However, India doesn't intend to carry out any studies to check the feasibility of mixing two vaccine doses.

“We have discussed the new scientific evidence, but there is no plan as such to carry out any related research in the country, which will essentially mean conducting clinical trials in people with two different vaccines,” said Samiran Panda, chief epidemiologist at the ICMR, and a senior member of the National Expert Group on Vaccine Administration for COVID-19, to Indian Express.

Virologist Shahid Jameel said, “From an immunology viewpoint, mixing two types of vaccines is not a problem. But studies show some more reactogenicity or minor side effects. Whether it can or should be explored in India will depend upon the basket of vaccines available in India. At this point, we should not divert our attention from increasing vaccine supply.”

This comes at a time when India continues to battle a severe second COVID-19 wave and also faces a serious shortage of vaccines, despite giving emergency use approvals to three vaccines. Bharat Biotech's COVAXIN, Serum Institute of India's COVISHIELD and Russia and Dr Reddy's Sputnik V have all been approved so far. So far, India has administered over 20 crore vaccine doses till today, 26 May, during Phase-3 of its Nationwide Vaccination Drive. India is still recording over two lakh new cases daily. That said, for the 13th consecutive day, the number of people who are recovering from the virus is higher than the number of new cases detected.

Preliminary results from the Combivacs study (conducted on over 600 people) by the state-run Carlos III Health Institute is out. The Spanish study found that people who were administered the Oxford-AstraZeneca vaccine as their first dose and then given the Pfizer/BioNTech dose had between 30 and 40 times the IgG antibodies than those who received two Oxford-AstraZeneca doses. They also found that mixing two different vaccines is safe and effective.

In a report by Nature, Magdalena Campins, an investigator on the Combivacs study at the Vall d’Hebron University Hospital, in Barcelona, Spain, states the Pfizer/BioNTech booster shot jolted the recipients' immune systems. After the second dose, the participants that got the mixed shots began to produce much higher levels of antibodies, and their antibodies could recognise and deactivate the SARS-CoV-2 virus in tests.

Similarly, even Oxford-AstraZeneca has begun a study to find out how two different vaccines work with each other. The UK government-sponsored Oxford University study found people who mixed Pfizer/BioNTech's vaccine with Oxford-AstraZeneca's were more likely to experience uncomfortable reactions to the second dose than people who received two doses of the same vaccine. These side effects were short-lived, lasting a few days and were not severe, with scientists describing them as “mild to moderate.” A note was published in peer-reviewed medical journal The Lancet by the Oxford University researchers, saying there were no other safety concerns so far with mixing Pfizer/BioNTech's and Oxford-AstraZeneca's vaccines. 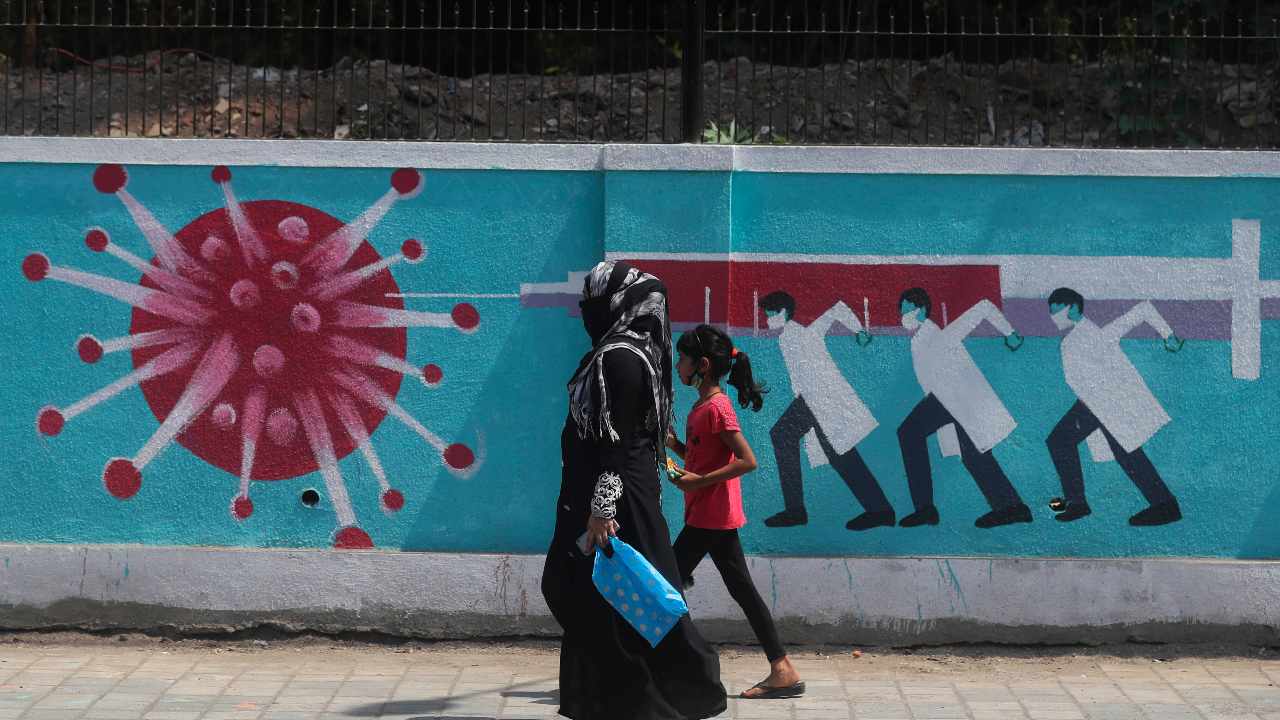 A woman along with a girl walk past a graffiti, depicting the coronavirus in Mumbai, India. Image credit: AP Photo/Rafiq Maqbool

Some countries have already jumped onto the bandwagon, and have recommended vaccine mixing if there is a serious shortage of vaccines, like in the United Kingdom and Canada. Others have commenced studies to check the feasibility of combining different vaccine combinations available to them. Oxford-AstraZeneca's vaccine has been looked down upon and even banned in many countries, as many blood clotting incidents in recipients have been reported. In South Africa, the vaccine is of no use against the dominant COVID-19 variant found in the country.

In the Philippines, a state-funded study will look at how China's Sinovac vaccine reacts with other COVID-19 shots. The study will start from June 2021 and will continue till November 2022. The country is undertaking this study due to an "unpredictable" supply of vaccines, said the Department of Science and Technology (DOST).

China is also testing combining different vaccines in a bid to boost their efficacy, said its top disease control official on 12 April 12, as per a Reuters report. Finland has decided to give those who got one dose of the Oxford-AstraZeneca vaccine, a second dose of any mRNA vaccine, while Sweden will give its people any other vaccine as their second dose. The US, on the other hand, is letting people mix Pfizer/BioNTech's and Moderna's vaccine doses with a gap of at least 28 days only in "exceptional situations".

India begins new vaccine phase in COVID-19 fight, ‘precautionary doses’ for frontline workers and seniors from today: All you need to know