Catastrophic infectious diseases are around the corner for marine mammals: Study

In the past, environmental variables like season and sea surface temperature anomalies, were tied with disease outbreaks in marine mammals.

Coronavirus crisis, has indeed, become an alarm to people across the globe to understand the ways in which certain infectious diseases can devastate a life. However, a recent study has expanded its research to identify the factors disturbing marine mammals.

"We are perhaps more alert than ever to the catastrophic impacts of infectious disease in both humans and animals. Our task now is to begin to understand what drives these events, particularly in species like marine mammals, where our knowledge is even more limited," said Claire Sanderson, a research associate in the Department of Fish and Wildlife Conservation within the College of Natural Resources and Environment and the research coordinator of the Center for African Resources: Animals, Communities, and Land Use (CARACAL).

In 2000, over 10,000 endangered Caspian seals died in less than a four-month span. Researchers later discovered that the culprit behind this devastating mass mortality event was the canine distemper virus. Infectious disease-induced mass mortality events are known to afflict a variety of species, including invertebrates, birds, fish, and both land and aquatic mammals. However, these events in aquatic mammals are understudied compared to their land-dwelling counterparts.

To help fill in the knowledge gaps, Sanderson worked with Kathleen Alexander, a professor in the Department of Fish and Wildlife Conservation and co-founder of CARACAL, to evaluate the factors influencing the occurrence of these events in marine mammals. They published their findings in Global Change Biology.

Sanderson and Alexander defined a mass mortality event as a "devastating number of fatalities within the same species over a brief period of time," which is also dependent on the species' conservation status and population size. Beyond the deaths of individual animals, mass mortality events can initiate a cascade of events with severe ecological repercussions. Affected populations are often at a greater risk of local extinction, and changes in community structure can upset an ecosystem's balance.

By conducting extensive literature searches, Sanderson and Alexander discovered that infectious disease-induced mass mortality events occurred in 14 percent of marine mammal species between 1955 and 2018. Viruses were responsible for 72 percent of these events and caused 20 times the number of deaths than bacterial outbreaks. Specifically, morbillivirus and influenza A outbreaks were the most commonly recorded. Due to their life cycles, both viruses can infect multiple hosts since they have the potential to be transmitted between various species.

To evaluate the role of life-history traits, they focused on sociality, trophic level (a species' position on the food chain), and habitat breadth. While sociality and trophic levels did not appear to be associated with mass mortality events in marine mammals, habitat breadth did. More than half of the species experiencing mass mortality events were pinnipeds, an order of semi-aquatic species that includes seals, sea lions, and walruses.

"Pinnipeds bridge the terrestrial and aquatic interfaces and may have greater exposure to pathogens that occur across these land types," Sanderson said. For instance, seals and sea lions are often observed on beaches, rocky shorelines, and docks, but they also spend a significant part of their lives in water. 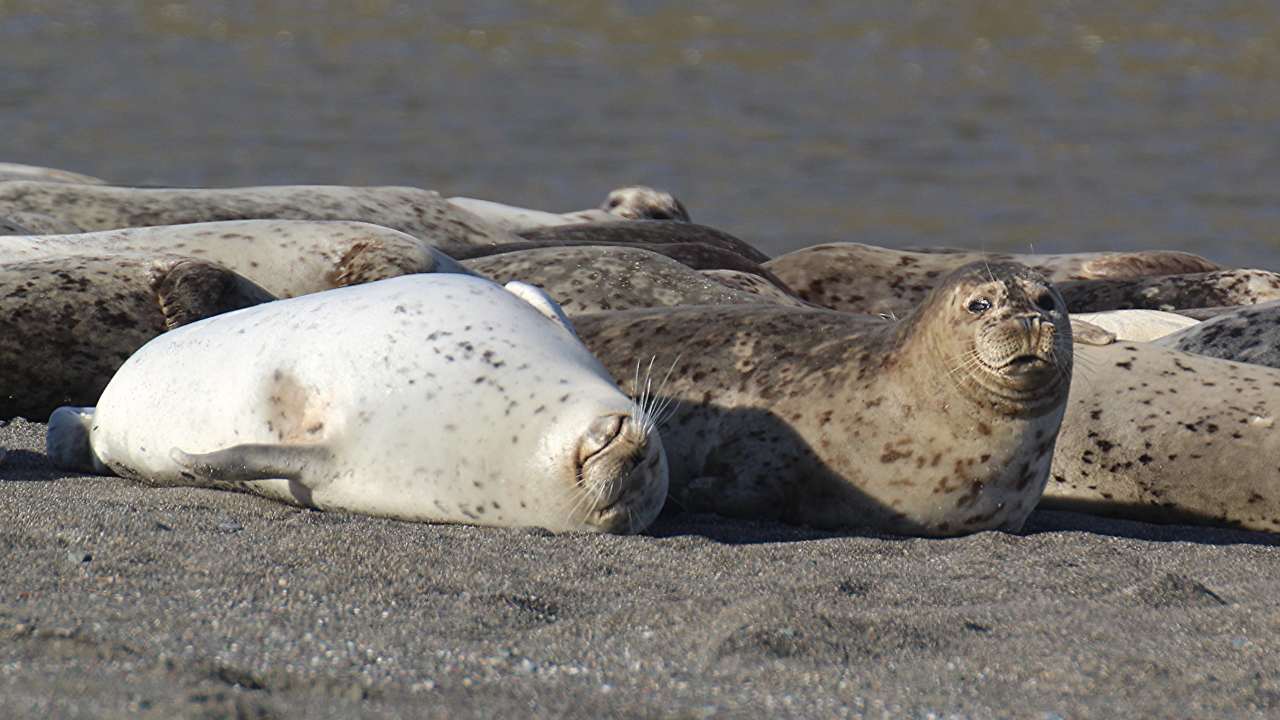 Pinnipeds in bed – a pair of harbor seals near the Russian river. Image: Mark Gunn/Flickr

In contrast to life-history traits, environmental variables – such as season and sea surface temperature anomalies – were significantly associated with disease outbreaks in marine mammals.

"As climate change intensifies, this may set off a complex chain of events that dramatically alter these ecosystems, affecting marine populations living in these environments," said Alexander an affiliated faculty member of the Fralin Life Sciences Institute. Climate change effects on sea ice and ocean salinity also have implications for the spread of disease.

In polar regions, sea ice is melting more quickly due to increasing air temperature, but various species of pinnipeds need sea ice to give birth, rest, mate, escape predators, and molt. As the ice melts away, pinnipeds are forced to congregate onto smaller, shrinking ice sheets. At higher densities, increased contact between individuals can allow pathogens to be transmitted more readily through a population and region.

The chemical balance of the ocean is also changing. In polar regions, melting sea ice dilutes the salty ocean water in a process called freshening. This can result in decreased prey abundance, since species like fish, mollusks, and crustaceans are sensitive to small changes in the environment. With less food to feed on, marine mammals may suffer from nutritional stress, resulting in decreased immune function and greater susceptibility to disease.

"Marine mammals represent important sentinels of aquatic health by providing information essential for managing threats to these vulnerable ecosystems. Addressing the root causes of climate change will be of critical importance as we chart a path forward in managing these species," said Sanderson.

Of all the marine mammal species that suffered an infectious disease-induced mass mortality event, the study found that 37 percent were listed as endangered or vulnerable to extinction.

"This work underscores the critical threat infectious disease can pose to marine species and the potential importance of climate change as a wide-reaching driver of this process. Here, our role is complex as we contribute directly to our changing climate, increasing pathogen pollution, and habitat degradation. But we also have the power to change things, address climate change, protect species and environments through effort and innovation -- humanity at its best," Alexander said.