Bring on the farts: Gujarat to hunt for India's best 'Fartists' in first-ever farting competition

The 22 September event is open to anyone who dares, for the price of Rs 100. It'll be hosted in a Surat discotheque.

We've heard of an all-you-can-eat competition eating, but there's a new kid on the block. Gujarat's (and India's) first farting competition is less than a week away. It's due to take place in Surat, Gujarat on 22 September 2019.

"Millenials frown when someone farts...the talent of farting is being lost," said Sangoi in a tweet recently.

millenials frown when someone farts
the talent of farting is being lost. #BoycottMillenials and participate in #FartCompetition #Surat pic.twitter.com/udR1o8Jktn

The idea stemmed, according to Sangoi, from a smelly incident while he was watching a movie with his family. One of his relatives remarked that if there was a farting competition, Sangoi would have won it. Anyone else might have dismissed the joke and moved on, but Sangoi took it to heart. He formulated a business pitch with it, and though people made fun of him, he let them have it.

"I decided to go ahead with the event anyhow even if there were 10 participants. The whole idea was to have some fun in times like the present one — where business is slow. But the response has been encouraging."

To make it hipper (not that the Fest would need any help in that regard), the organizers will hold it in (no pun intended) a disco. The Festival has won critical acclaim, with sponsors pouring in. The top three winners win cash rewards of Rs 15,000, Rs 10,000 and Rs 5,000 and trophies. Who knew you could get accepted for farting, let alone be rewarded for it?

The competition's winner will be decided on the basis of who farts the loudest, longest and if they are musical. The King or Queen of farts will be crowned "the Paad-Shah". 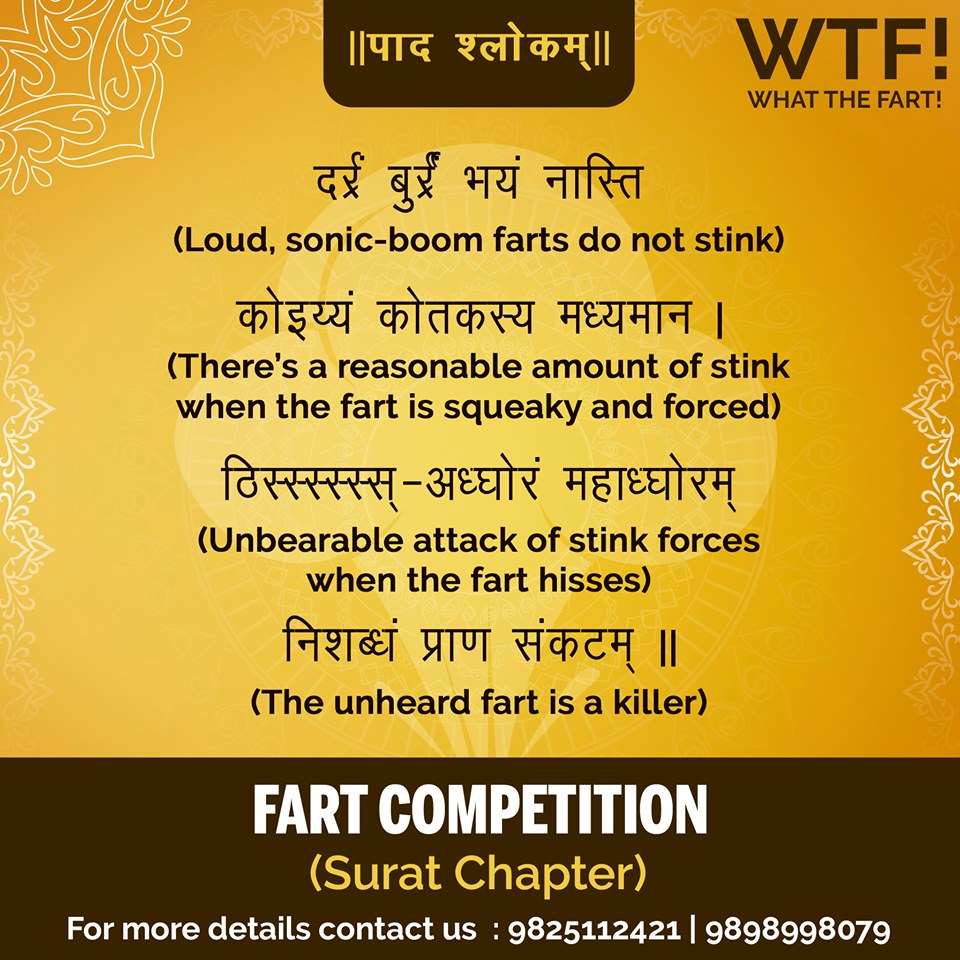 Anyone can participate in this competition by registering themselves for the price of Rs 100.

"Till today more than 30 people have sent in their entries while there are many oral inquiries coming. We are expecting participants from places like Ahmedabad, Balasinor, Jaipur, Mumbai, Surat and other adjoining cities. The most interesting thing is that I am getting queries from Kolkata whether I would be keen to organize a similar event around Durga Pooja over there," Sangoi told The Citizen.

In an interview with Vice, Sangoi said that he wants to expand this idea to other cities as well. "I plan to organize such events in Ahmedabad after Diwali and in Mumbai in December besides one in Kolkata during the Durga Pooja festival," he said.

For anyone who wishes to take part in this competition, Sangoi pointe to the event's page on Facebook, where help, updates and advice will be at hand to assist participants in preparing themselves for the big day.

Let it rip boys and girls.