In India, birds are dying because they collide with blades of the wind turbines

Although wind energy is a source of renewable energy, unsuspecting birds are facing the brunt of tall blades.

Although wind is a green source of renewable energy, a new study has revealed that wind turbines are posing a threat to lives of birds in their vicinity. Birds colliding with turbine blades are dying.

Researchers were invited by two windfarm owners — one in Samakhiali in Kutch, Gujarat and the other in Harapanahalli, Davangere, Karnataka — to investigate bird mortalities in their farms.

The team scanned a radius of 130 m from the turbines, choosing a spiral path from the base of the windmill. This ensured that all surrounding areas were covered, and no carcass was missed. Researchers looked for bird cadavers, signs of injuries on the bodies and remains of feathers and bones around the wind energy tower. Data was recorded based on the condition of the remains, species, and the distance from the turbine. The study had to consider removal rates due to scavenger animals. 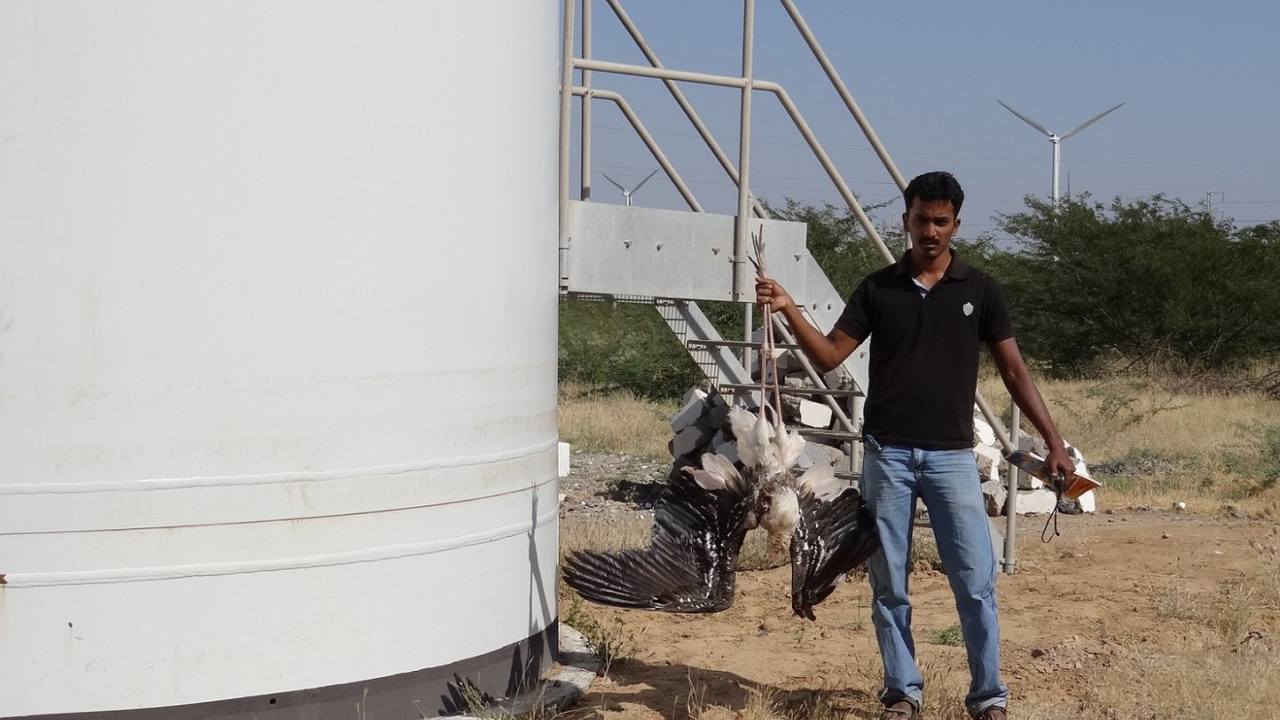 Overall, 59 turbines of the Kutch windfarms were studied, and 23 cycles of searches were conducted at each turbine, with an average gap of 40.5 days between two consequent searches.

This region is close to four biodiversity areas, with diverse bird population, and is an important wintering site for migratory birds from the Arctic, Europe and central Asian regions. Among the 47 deaths, 43 were recorded in the migratory season, with maximum carcasses found within 20 m from the turbines. While Eurasian collared doves recorded the most mortalities, bodies of Dalmatian pelican and painted storks — both threatened species — were also found.

“The surrounding grassy plains support species of raptors like Harriers, Eagles and Kestrels that glide in a circular movement. This increases its chances of colliding with the windmill blades. Raptors are long-living species that lay few eggs. Increasing deaths of these birds can endanger them as a species,” pointed out Dr Ramesh Kumar Selvaraj, ornithologist and team member, while speaking to India Science Wire. Birds around a windmill in Samakhiali. Image credit : A Mohammed Samsoor Ali

In Davangere, the wind farm is located near a deciduous forest area with a rich avifaunal biodiversity of 115 bird species. During 2014-2015, 24 turbines areas were searched over nine cycles. Seven carcasses were found with four of them during the migratory season. All were seen within 60m from the windmill.

“Our investigation indicates approximately 0.5 deaths per turbine, which may be an underestimation, as only collision deaths were recorded at 40-day intervals. Constant monitoring will escalate the figures significantly,” the researchers said.

The scientists suggest appropriate mitigation options should be taken up. Detailed bird monitoring studies, careful selection of wind farm sites keeping in mind bird habitations can help reduce the impacts of windmills on birds to a large extent.

The study results have been published in the journal Current Science.