There’s a lot more to astrophotography than equipment. Here’s what you need to know before you dive in.

Editor's Note: This story is part of a three-part series about the basics of equipment used in astronomy. Part 2 discusses the many different astrophotography techniques and equipment one can choose from, and Part 3 elaborates on the fittings, upgrades, and hacks that can enhance even the most basic stargazing equipment.

The night sky will always be the gateway to the answer of who we are in this universe and where we come from. While that answer requires several rounds of drinks and several more decades of research, astronomy is something one can jump into almost immediately and experience a slice of that amazement and bewitchment that is our universe.

From humble backyard sessions to mini observatories for the more dedicated, the scope (pun intended) of astronomy is vast and can often dissuade new people from partaking. Not to mention the cost of astronomy, where you could spend anywhere from a few thousand to a mid-range SUV’s worth of cash on gear.

This handy little guide should help you spend your money more wisely. 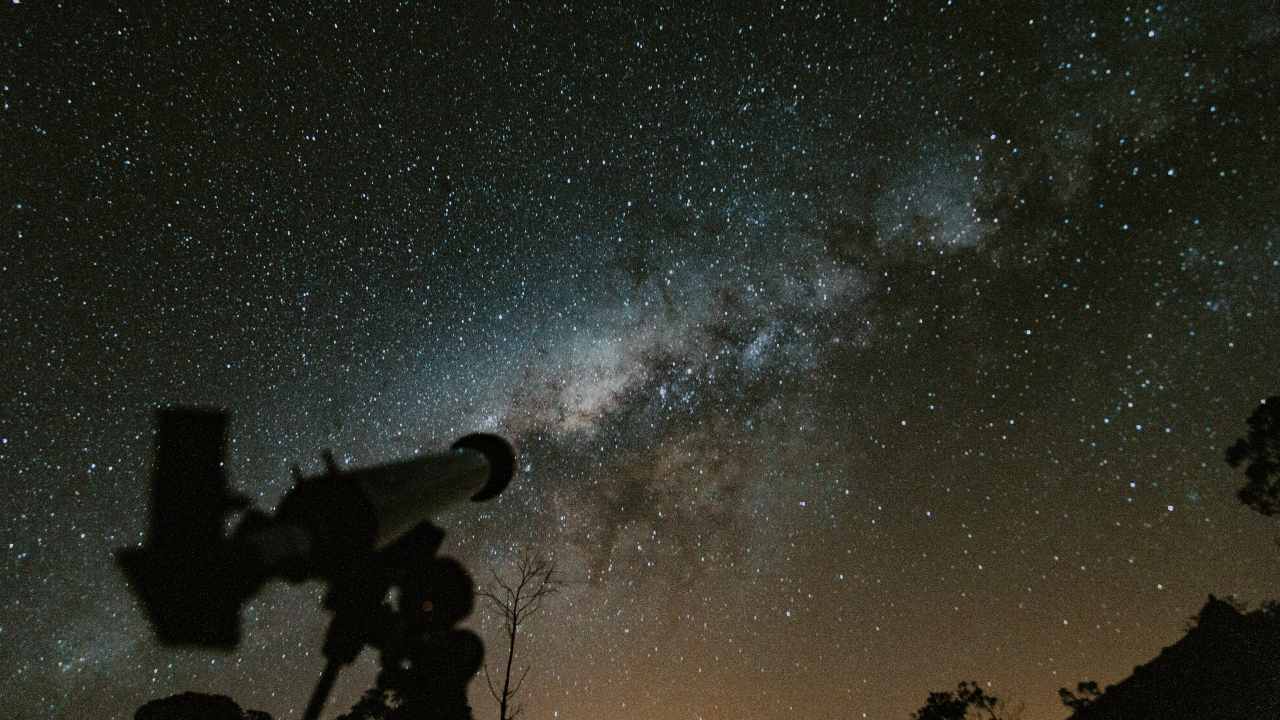 Before you buy anything

There’s a lot to learn in astronomy without even going near a telescope. Learning about the night sky, the positions of the major constellations, the seasons during which they appear, the list goes on. For this reason, the first piece of kit you should consider procuring is a star chart.

A star chart is a map of the night sky and the positions of objects at a particular point in time. Star charts can be found for free, at websites like Skymaps for example, or in the form of apps like Google Sky Maps. Familiarizing yourself with what you can expect to see from different areas is also a good idea.

A starchart used during the Apollo 11 mission plans at NASA. Image: NASA

So now you have an idea of what you, as an amateur, can observe. Time to rush to the nearest hobby store and buy the first thing they have! Not.

Despite popular opinion, a telescope is almost always a bad investment if you’ve never used any sort of equipment to look up at the night sky. Even base models are quite expensive, they’re confusing to use, and results are often never what you expect to see.

The planet Jupiter, for instance, will look like a large dot with 4 smaller dots next to it. Saturn will appear as a dot with a fat line through it. It’s important, as an astronomer, to figure out what you’d like to observe, and that comes only with experience and practice.

Until then, the most recommended tool for observing are a good, sturdy pair of binoculars. That’s right, the things you usually use to watch birds with. One pair of bird-watching binoculars for my new astronomy habit, please.

Binoculars are lightweight, can fit into a backpack, and are far easier and cheaper to procure than a basic telescope. But the real advantages? Since you use both your eyes with binoculars, you can resolve a deep sky object more effectively, which results in better processing by your brain. This translates to a much better view for you, and the ability to detect fainter objects. Binoculars also have a wider field-of-view (FOV) than telescopes, which means you see more of the sky in the frame.

So, what binoculars do you get? Binocular models are usually measured in terms of magnification times aperture (the diameter of the lens in front). A pair of 7x35 binoculars means that the objective and secondary lens provide a magnification of 7x with a 35 mm aperture.

The most recommended variety is a pair of 10x50s. These are exactly on the line between usable aperture and lightweight, and value for money. I’ll explain the technical terms in more detail in a bit.

The only model, in particular, you should go for, IMO, is the Olympus 10x50 DPS-I. This is perhaps the best pair of binoculars I’ve ever used, to the point where I’ve gotten the same model twice. It can easily be had on e-commerce stores for around Rs 6,000.

There are, of course, bigger and better things out there. Thanks to the increasing trend of portable and powerful, binoculars are now being made specifically for astronomy purposes. These are models that are usually 20x70 or more, and go up to 25x100. But those are expensive, are heavier than the 10x50s, and are not easy to procure here.

Now can we get a telescope?

You've got some experience stargazing. You've seen at least the brighter galaxies and star clusters from dark skies. You can tell which constellations are summer ones and which are winter ones. It’s probably time to take it to the next level and buy the most coveted piece of equipment: a telescope.

However, before you rush to the nearest hobby store, there are a couple of terms to keep in mind:

There is one more very important point to note. Whatever you do, at any cost, avoid buying telescopes that advertise "500x magnifying power" or similar. Such paperweights, as we call them, are just that. Useless for anything else. Magnification in a telescope is useless if not combined with a good aperture. Size does matter here, folks!

And now that we’ve got that out of our way, let’s have a look at what we have on offer. Telescopes come in a variety of configurations.

The most popular two are:

Refractors: The most basic telescope is called a refractor. This is the most recognizable telescope out there and was invented in the 1600s. It was then perfected by Galileo, who is widely credited for popularising it.

A refractor consists of a convex lens, called the objective, and a secondary lens at the back, which is a concave lens. The objective refracts light so that it converges at a single point on a plane, called the focal plane, and this is then magnified by the secondary.

Small refractors are usually what most people start with, and a refractor with an objective of around 70 mm aperture and a focal ratio of f/10 or so is good enough to see good details on the moon, the bigger planets like Jupiter, Saturn, and Mars, and some star clusters and brighter nebulae. However, refractors are much more expensive, size for size, than the next variety.

Reflectors: The more popular variety of telescopes among astronomers in particular, the reflector telescope was invented by Sir Isaac Newton himself. Instead of the conventional lenses, a reflector telescope uses a concave mirror to reflect light on to a secondary flat mirror, and an eyepiece magnifies the resulting image.
An 8-inch reflector, which is a very good long term investment, costs significantly less than a refractor of the same aperture. Which is why it’s a good step up from binoculars, in my opinion. Expect a telescope of this size to cost anywhere from Rs 35-40,000.

There are also some lesser-known kinds:

Telescope mounts: A telescope’s mount is just as important as the telescope tube itself. A good mount makes the difference between a steady, crystal clear image (even on windy days) and a shaky, annoying image that will most likely ruin your entire observing session.
Telescope mounts usually consist of three popular variants:

Alt-Az mounts: These move in 2 axes: Up-down (altitude), and left-right (azimuth). They’re the simplest mount to use, but that also means they’re a bit limited in movement. Tripods are alt-az mounts, for instance. These mounts also have a very limited payload capacity. An ol' time refractor from the Cincinnati Observatory in 1848. Image: Wikimedia Commons

Equatorial mounts: Equatorial mounts work differently. Instead of alt-az, they are aligned along a celestial coordinate system called Right Ascension (RA) and Declination (DEC). EQ mounts work by aligning the axes to the Earth’s poles. This means that you can then track and find objects easily using their RA and DEC coordinates.
However, beginners will find them hard to use, and thus, these are more commonly used for astrophotography, which is an entirely different article.

Dobsonian mounts: Dobsonian mounts are a variation of alt-az mounts. Instead of mounting the telescope on a tripod, it is mounted into a cradle box, which is then mounted on a swivel. The mount was invented by John Dobson, a popular American amateur astronomer who believed in the art of DIY. It’s extremely simple to manufacture and use, and so are by far the most popular mounts among amateur astronomers. But they’re bulky to transport

There are other goodies that you can swap out in your telescope, like the focuser, eyepieces, viewfinder and so on, but all that merits another entire article. 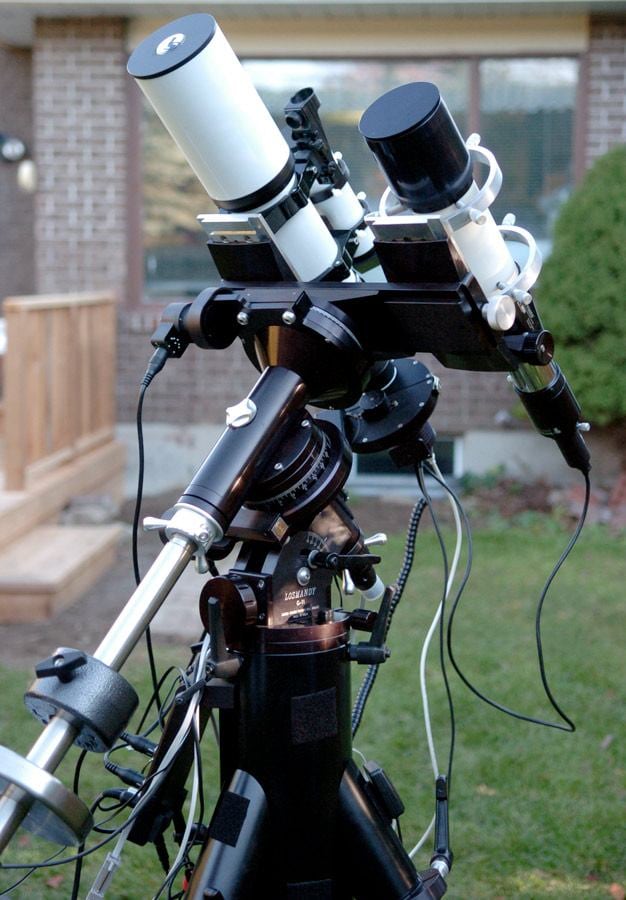 A sturdy equatorial mount good to go for some serious astrophotography. Image: TheMcDonalds

Just tell me how to get one already!

Now, after all this, what brand of telescope is best? The best ones are not easily available in India. The ones we do have that are widely popular are Skywatcher and GSO Optics. Meade is a very popular brand globally but is expensive, and imports are a nightmare. Celestron has the biggest e-commerce presence in India but I would not recommend their basic telescopes at all to amateurs as they’re of inferior quality and are exorbitantly priced.

Buying a telescope in India is not as simple as clicking checkout on a store page; few companies actually stock them (although the number is increasing yearly), and you have to place an order with them via bank transfer.

C-Sky Telescopes and Tejraj India are the two most popular astronomy equipment dealers in India.

Astrophotography Guide Part 3: Filters, eyepieces and other hacks to elevate your stargazing experience

ISRO to launch Chandrayaan-2 in January 2019; probe to orbit Moon before landing

Chandrayaan 2: ISRO seeks to bet on trillion-dollar Helium-3 on the moon's surface