Astrophotography Guide Part 3: Filters, eyepieces and other hacks to elevate your stargazing experience

Accessories can elevate the stargazing experience of even the most basic telescopes immensely, or make astrophotography a breeze.

Editor's Note: This story is part two of a three-part series about the basics of equipment used in astronomy. In Part 1, the author talks about first steps into astrophotography and choosing the right gear, followed by the different astrophotography techniques and equipment to choose from are discussed in Part 2.

If you’ve been following our amateur astronomy series, you’ll have figured out what part of astronomy you may be into. Or you haven’t and have decided to give all facets a go, expensive as that may be. But there are upgrades to be had, and hacks to be done. There are some accessories that can take even a basic telescope and elevate the observing experience immensely or make taking photos a breeze.

Let’s have a look at all the extra goodies you can buy:

The finderscope is the smaller telescope that’s attached to your "bigger" telescope. It is used to locate objects in the sky without high magnification so that it’s easier to locate said object. There are a few varieties of finderscopes:

Red-dot finder: The red-dot finder is the simplest of them all. It consists of a red light projected on to a transparent screen. This becomes the “crosshair” which can be used to point at objects. Typically, red dot finders offer zero magnification, and at least a little is needed to find night sky objects, so they’re rather limited in use. But they are the easiest to use (and are usually the ones shipped by default with your telescope) and are also the cheapest.

Optical viewfinder: This is the most popular finderscope available. It is the best example of the “small telescope” finder because it is exactly that: A small telescope with a crosshair that aids in manual searching. Optical finderscopes are a little more expensive than red dot finders but their field of view, quality and ease of use are worth the extra price.

Telrad finders: Telrads are a variation of red-dot finderscopes. They are a bit advanced to use, but they are far more accurate than the previously mentioned two. They’re also the most expensive of the lot. 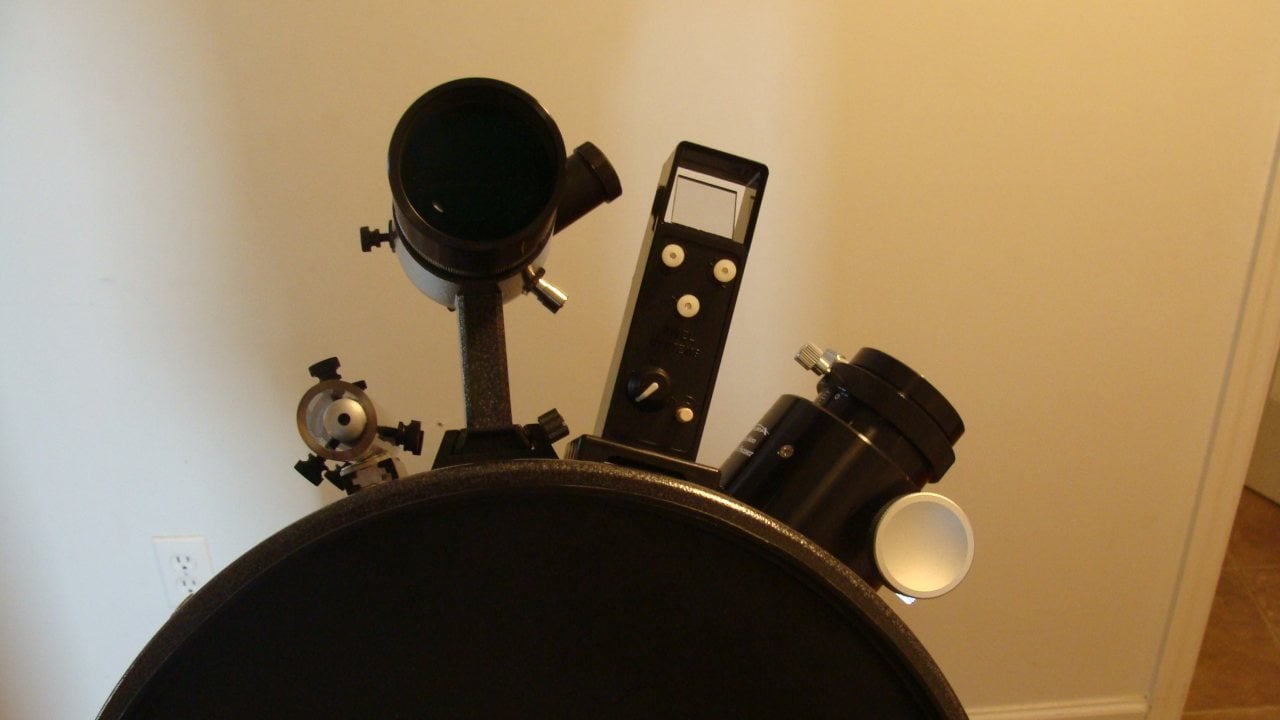 A telescope’s primary lens takes light and converges it on to a point. An eyepiece is responsible for magnifying that object. Good quality eyepieces, therefore, make or break your observing session. Even the best of telescopes falter because of shoddy quality eyepieces. As expected, bad quality eyepieces are what most telescopes initially ship with. This is why almost everyone immediately orders extras once they get their kit.

Eyepieces are classified based on magnification and type of lens elements used. Typical eyepieces are 25-40 mm eyepieces, while ones that offer a higher magnification have smaller numbers (15 mm, 9 mm and so on). Of course, how much magnification you’ll really end up getting depends on the focal length of your telescope (The method to calculate this was discussed in our first article).

I mentioned lens elements. Eyepieces are constructed in a certain order with certain lens elements. You also have ultrawide/telephoto eyepieces. The ones you typically get with a telescope are Kellner or achromatic eyepieces, while good eyepieces come in Plossl, APO, Nagler or hybrid variants.

Another thing to check, eyepieces come in two popular sizes depending on the size of the adapter your telescope has: 1.25 inch and 2.0 inch.

The name is self-explanatory. GOTO mounts are computerized mounts that find and track objects for you to observe or photograph.

Not every telescope can accommodate a GOTO upgrade, so you’ll have to check beforehand. These mounts are pretty expensive, starting at around 20-30k, but if you want a hassle-free session, look no further. Most systems have a database of objects that they can automatically slew to, so all you have to do is connect them to a power source and press a button.

A cheaper but far more complex option is assembling a GOTO system yourself, but unless you really like tinkering with servos, wires and microcontrollers, I wouldn’t recommend it. But it’s an option. Chances are that by now you’ll know what you see through a telescope. The view isn’t exactly most peoples’ definition of pretty (I would disagree with them but then again, our nerd-view is different from most people anyway). A galaxy looks like a grey, elongated blob. Star clusters are barely discernable. Planets look like discs; moons might just look like white dots.

One useful tool that can help aid some of these views (and also while taking photographs) is an astronomical filter. These filters essentially let different wavelengths of light pass through depending on what they’re made of.

UHC (Ultra High Contrast) filters are the most popular. They allow multiple emissions to pass through, therefore revealing a lot more detail and some colour. UHC filters are used to observe nebulae commonly. O-III filters and H-Alpha filters are two other kinds that are commonly used with nebulae. Similarly, solar and lunar filters exist (you should NEVER observe the sun without the former).