Artificial highlands can lead to siltation of the park’s wetlands, grasslands, thereby harming its fragile ecology.

The floodwaters in Assam have receded. Among the most telling images of the devastation it caused on helpless animals, was that of a group of one-horned rhinos huddled on a dry piece of land in the submerged Kaziranga National Park (KNP).

Presumably exhausted, some of the animals were lying down, even as another tried climbing up from the surrounding water. There have been many other similar pictures of helpless animals standing atop highlands created inside the national park to offer succour during the annual floods. Kaziranga has 144 artificial highlands—of which 33 were sanctioned three years back—to bring down animal casualty during this yearly tragedy.

But are these artificial highlands beneficial in the long-run, both for the national park’s fragile ecosystem and the animals? Environmentalists and other experts believe otherwise. A herd of elephants during floods in Assam. Image credit: Rohini Saikia.

More than 200 animals, including 18 one-horned rhinos, were killed in the floods in Kaziranga this year. An image of a tiger fleeing from the floods in KNP and taking refuge in a shop went viral on social media—indicating the animals’ level of desperation. Many such animals, guided by their instinct to climb up and survive, sought refuge on the artificial highlands.

But are these highlands a long-term solution, given that Assam gets ravaged by floods every year, most of the times in not one, but two or three waves?

Pankaj Sharma, divisional forest officer (DFO) of Nameri National Park, also in Assam, thinks that building artificial highlands is not a tangible solution. “Creating 33 artificial highlands, in addition to the existing 111, will lead to more erosion, more siltation in the grasslands. The grasslands of Kaziranga, its wetlands are a very important part of its ecology, on which multiple animal species are dependent, including the rhino,” Sharma told Mongabay-India.

Elaborating on his experience in KNP, where he had worked in the past, Sharma said that there was a time when grass grew up to a height of 12 feet in the park. “Now that’s rare,” he said, indicating grassland degradation.

At a conclave titled, Climate Change Threats on Wetland Ecosystem of Protected Areas and their Management, organised by Kaziranga Wildlife Society and Assam Science Technology and Environment Council (ASTEC) earlier this year, scientists and other experts said that erosion, siltation, and shallowing of wetlands have become the major threats to KNP. Although erosion in this case — and in most cases when threats to KNP are counted, like by UNESCO — is river-related, Pankaj Sharma said that the artificial highlands further increase this threat. “These artificial highlands may offer temporary relief, but their threat of siltation is more grave to the ecology,” he added.

Floods not the villain

The 880 sq. km KNP, with a core area of 430 sq. km, is surrounded by the Brahmaputra on the north and the hills of Karbi Anglong in the south. Apart from being the world’s major stronghold of the one-horned rhino, Kaziranga is home to several globally threatened animal species like the tiger, Asiatic elephant, wild water buffalo, gaur, sambar deer, hog deer, and the hoolock gibbon. The annual floods put immense pressure on these animal species for survival. A tigress moving from a flooded Kaziranga to the higher grounds at Karbi Anglong hills took shelter in a shop. Image credit: International Fund for Animal Welfare (IFAW)/Wildlife Trust of India (WTI).

But ecologically, floods are not the villain. “On the contrary, floods are necessary for Kaziranga. The waters wash away invasive weeds, revitalise the wetlands and replenish the grasslands on which animals, including the key species like rhinos, tigers and elephants are dependent on,” former Kaziranga director, Satyendra Singh said. Floods are an ecological process and animals possess a natural instinct to respond to this process—by moving towards the natural highlands, to the hills of Karbi Anglong, as the waters rise.

“If you observe, the animals start moving towards the natural highland June onwards. The hog deer migrates in big numbers and elephants start moving towards the west,” Pankaj Sharma said. Hog deer are also among the biggest casualities every year during floods. This seasonal migration is through specific routes—the animal corridors—that are increasingly being encroached upon by human settlements, commercial establishments, thereby blocking the animals’ natural path.

A tangible solution, as experts even within Kaziranga agree, lies in retrieving these animal corridors, thereby offering them access to their natural highlands.

In a conversation with Mongabay-India, Robin Sharma, research officer at Kaziranga National Park, said, “As a whole, artificial intervention (artificial highlands) to an ecological process is not useful.”

Although he did not comment on the threat of siltation by these artificial highlands and instead said that “only an in-depth study can conclude that”, he did agree that the real solution lies elsewhere.

“The main way to help animals and save their lives is to free the natural corridors. Kaziranga and Karbi Anglong were once a part of the same landscape; the hills of Karbi Anglong were the natural highlands when it (Kaziranga) was flooded. There were no interruptions in the corridor. There were no establishments, blocking these corridors. But now, where do these animals go? Ideally, artificial intervention should be as low as possible, but for temporary relief, these artificial highlands are providing relief.”

Natural corridors rather than artificial highlands

According to Robin Sharma, there are nine identified animal corridors connecting KNP to the animals’ natural highland in the hills. Not only is increasing human encroachment blocking these natural paths, but mining activities and stone quarries along the national park’s southern boundary and in the catchment areas in the Karbi Anglong hills have disrupted the animals’ natural refuge.

In April this year, the Supreme Court banned all types of mining and related activities along KNP’s southern boundary as well as in the catchment areas of the rivers that originate in the Karbi Anglong hill ranges and flow into the national park. This is a significant move, said Robin Sharma, considering how mining and quarrying activities were leading to “contamination of the water flowing down to Kaziranga”, thereby affecting the wildlife and its habitat.

Prerna Singh Bindra, former member of the National Board for Wildlife and author of The Vanishing: India’s Wildlife Crisis, raised another critical issue affecting Kaziranga’s wildlife—the National Highway 37 that cuts through the landscape between Kaziranga and the hills of Karbi Anglong. Every year, as the national park gets flooded and the animals try and escape, they are left with no choice but to take on the speeding traffic on NH-37 while crossing over to the highland.

This puts additional stress on the animals and despite speed limitations set for vehicles, leads to a large number of animal causalities. According to the flood report of the forest officer, Eastern Assam Wildlife Division, 17 animals were killed by speeding vehicles along NH-37 in this year’s floods. Wildlife conservationists are therefore worried over widening of the NH-37 to accommodate the rising traffic. 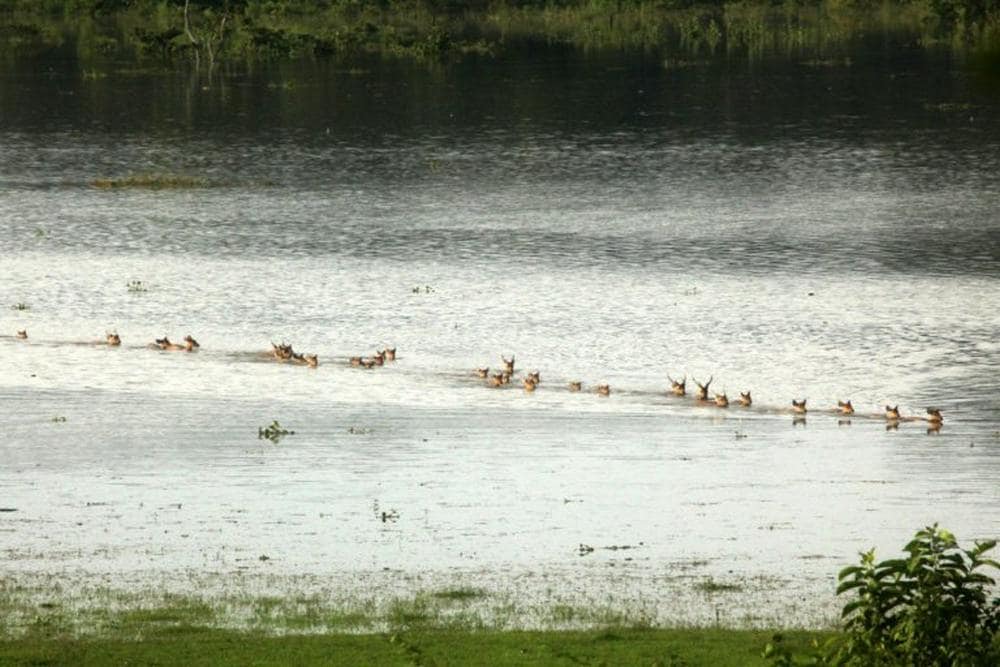 Animals swim through the floodwaters in an attempt to reach safer grounds during the floods in Assam. Image credit: IFAW/WTI.

“The important issue here that needs to be address on a priority basis is to conserve the corridor connecting Kaziranga to Karbi Anglong, which are the natural highlands. Plans to expand the National Highway 37 that cuts through this vital corridor must be shelved,” Bindra said. “The corridor is also choked by encroachments and expanding infrastructure, such as (tourist) resorts. There is extensive illegal mining (stone quarrying) in Karbi Anglong which must stop and Karbi Anglong must be protected. The passage for wildlife to these natural highlands must be cleared and be made safe,” she added.

Wildlife conservationist and activist Rohit Choudhury had filed a plea with the National Green Tribunal against the widening of NH-37 as it endangers the lives of animals because of heavy traffic. The NGT however disposed the plea since the matter was already under consideration at the Supreme Court.

Creating more and more artificial highlands inside the national park to offer succour to the flood-affected animals, therefore, is not a solution enough, feel experts. In any case, said an official of the Kaziranga National Park, it is mostly rhinos who have taken refuge on these artificial highlands during the floods. Most other animals, like elephants and hog deer, have still preferred to migrate to their natural highland in Karbi Anglong.

Robin Sharma, however, insisted that these highlands were a sort of “mitigation measure”—”however unwilling we may be to the idea”—that have been put in place to deal with the human activity on the animals’ natural passage. About 70 percent of the 111 existing artificial highlands, he said, were in a dilapidated condition. “The 33 new ones are built along the southern boundary of Kaziranga, in the east-west direction, in the direction of the water flow.”

Pankaj Sharma, however, still asserts that “repairing the existing highlands, instead of building new ones” to provide a temporary solution, would have been ideal. Activist Rohit Choudhury corroborates this, adding that instead of diverting resources in creating artificial refuge spots, stress should be given by the government in clearing the animal corridors to their natural refuge.

Officials in Kaziranga, in the meanwhile, say that they are working towards maintaining the sanctity of the animal corridors, “with no development activity”.

“In some of the functional part of these animal corridors, there have been houses and shops built. We would like to regularise the corridors,” Robin Sharma added.