Apple Watch Series 4: Here's what a medical expert says about the ECG feature

The ECG's readings are processed by an algorithm into a detailed report that doctors can evaluate.

The Apple Watch is back with Series 4, and this time with a huge leap in its use of medical technology.

The Watch can detect the heart rate with remarkable accuracy – sensitive enough to pick up on heart arrhythmias, Jeff Williams, COO of Apple Inc said at the launch event.

Medical tech is an industry in itself, evolving rapidly. And with the Series 4, Apple evidently wants to take a bite. Platforms like Cerebro (an AI-based app for nurses to monitor patients efficiently) and DxtER (an AI-based engine that monitors vital signs for people suffering from critical conditions) are aimed at monitoring vital signs in patients for quick response in an emergency.

But the Apple Watch’s electrocardiogram (ECG) feature isn’t in it for that critical moment of life-or-death.

No, this feature is geared up for the long haul – on the wrists of people living with an illness that isn’t going away anytime soon. A first-line of monitoring for people with heart conditions and irregular heart rates.

In the world of wearables, this is a first, complete with US FDA certification!

A win for the tech-abled hypochondriacs? I think so. 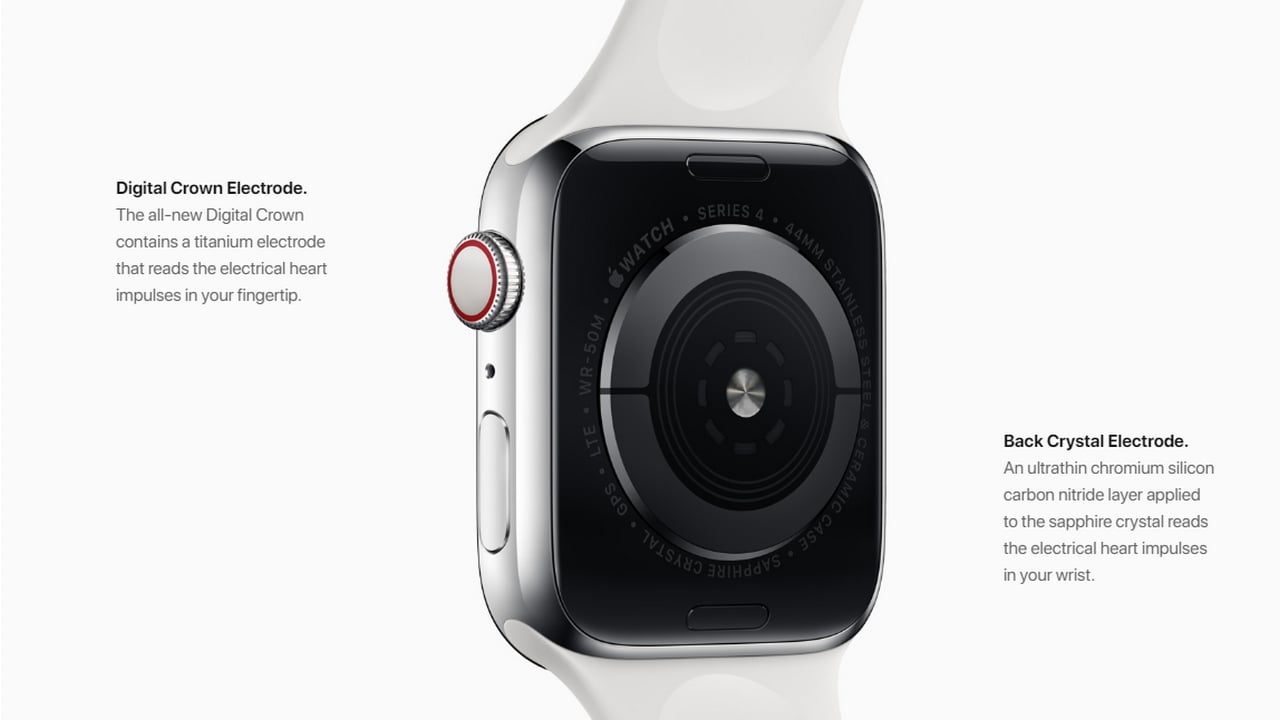 The two sensors (electrodes) that detect pulses from minute electrical changes on the skin are on the back crystal and the base. Holding the digital crown down for 30 seconds with the ECG app activates these sensors. Image courtesy: Apple

An international study warns of heart conditions among Indians having increased to 34 percent in the 26 years ending in 2016. For the 14 lakh urban Indians that live with heart disease today, the ECG feature on Series 4 offers a means of keeping tabs on your heart rate and rhythm as frequently as they feel the need to.

While monitoring heart rate in itself is not unusual for a wearable to be able to do, the new Apple Watch can record impulses during the resting heart rate — when there’s no strenuous physical activity being done.

When the ECG app is opened and the digital crown held down, two separate sets of sensors on the Watch – one in the back crystal, and another in its base begin duty. The sensors used to measure these impulses are electrodes – a characteristic of ECGs – which detect electrical impulses from minute electrical changes on the skin surface with every pulse.

The readings from these sensors are relayed to a software algorithm, which processes it into a tidy, detailed report that could be exported and printed for a doctor to evaluate if the need arises. Another feature of the Series 4 is its SOS feature, which prompts for a response after a serious jerk or fall. It sends out an SOS call if you're immobile and don't respond to it in 60 seconds. Image courtesy: Apple

What’s impressive is not just that the Watch has an ECG feature, but the level of micro-computing and medical tech that it packs in.

Traditionally, an ECG of this kind called a ‘surface ECG’ would use a series of electrodes (between five and twelve), placed on the limbs and chest. By placing them on different parts of the body, it captures a comprehensive pattern of the heart’s impulses from multiple angles.

The result of an ECG is a composite of all these inputs — an accurate, reliable scan of the heart’s thumps and pulses. An ECG can pick up on illnesses like arrhythmia (irregular heart rhythm) and heart attacks. The new Apple Watch intends to give its users access to these pithy powers by placing a finger on its digital crown for a mere 30-seconds.

It sure sounds like a feat the way Apple sold it.

But is an ECG report from your trusty Apple Watch Series 4 something a doctor would entertain?

We asked a leading cardiologist at the Krishna Cardiac Care Centre in Mumbai, Dr Ashok Panjabi to set the record straight.

Here's what he had to say:

What do you think about the new ECG feature on the Apple Watch Series 4?

It’s certainly not the first portable device to record an ECG. There have been a few others shaped like pagers, complete with leads that connect to the skin.

Portable ECGs have been available for years. What this offers is more convenience than a novelty.

Does the ECG report from the Watch hold any medical value?

Firstly, the report that this Watch gives you isn't an 'ECG' in the traditional sense. It’s a rhythm strip – a record of the heart’s electromagnetic impulses over a period of time.

In a wearable device, it is likely recorded with a single lead (electrode), unlike a traditional ECG that has 12 such leads.

So, it certainly isn’t a replacement for an ECG by any stretch of the imagination. It could be useful as a screening tool for heart disorders, but not much more than that.

Does FDA approval make it any more reliable?

FDA approval is definitely an important thing for a product from a safety and a quality standpoint. If it passes the stringent tests and requirements of the FDA, it is with good reason.

But whether its reliable is a different question altogether. So a Watch with an ECG feature can't be trusted?

The problem is that an (ECG) is a sensitive thing.

It can be disturbed easily, it can pick up on a person’s anxiety and nervousness, on signals from the environment. This is assuming the instrument itself works without errors.

There’s a good reason doctors recommend (ECGs) from an experienced professional. They are most reliable when done in a controlled environment and looked at by a trained professional.

As a heart monitoring feature, is it good for anything? At all?

Heart rate monitors have been part of many wearable technologies before this. An ECG, though, is less common.

I can imagine that with an ECG app, there would be some degree of processing involved. The user would still have to be knowledgeable about how to read an ECG properly.

One trouble I foresee with having one on your wrist is that it could cause for alarm in people that are perfectly healthy. This isn't more harm than help.

I've had people with no major problems rush to me in a panic after having seen something they think isn't normal. Instances like this can trigger anxiety and panic in people. This could be both a nuisance and concerning at the same time.

Would you entertain a patient's ECG report from an app?

Sure, I would have a look at it.

I view it as a screening tool, but not as a reliable scan for a medical diagnosis of any kind. For more serious illnesses, there are complex heart scans that depend on accurate results from an ECG. I would not make any such decisions using a rhythm strip from a watch.