Editor's Note: This story is part of a campaign called Biodiversity by the Bay, run by Mumbai's Ministry of Magic. The campaign is a citizen-driven environmental initiative to protect the rich biodiversity that lives in, or makes a stop in Mumbai on its migratory path elsewhere. The story is the second in a series – An architecture student’s vision for building a greener Mumbai – in which young architecture and urban planning students pen down their ideas for a sustainable future for development in Mumbai.

Our cities represent the cultural, economic and behavioural character which is largely dependent on physical setting or context. We build according to the topography, and in this process certain values, be it social or cultural, get associated with it. Hence, our cities reflect the homogeneous relation of our value systems and our perceptions of natural ecological surroundings.

However, in the race of urbanization, natural features of urban areas have faced a gross neglect under the planning process which led to their deterioration. Rapid urbanization coupled with industrial growth has made adverse impacts on the quality of the natural environment. The ecological patterns are distorted by human intervention. Urbanization and its adverse impacts on ecologically-diverse lakes & landscapes in a city. Image: Author provided

Water bodies in urban areas are trapped within an ever-increasing dense fabric of the city. The neglect and disregard on the urban water bodies ultimately depicts them as useless spaces led by change in perception towards water bodies. This change in perception enables change in approach (governmental or social), causing its deterioration. Hence, this article is an attempt to analyse how advantageously the natural features like urban water bodies can be used to eliminate the negative impact of haphazard development on Mumbai’s ecological breathing spaces.

Thane – one of the fast growing cities of Mumbai inherits a rich historic past. It was ruled by Shilahar, Portuguese and British and its history reflects the traces of people’s association with water bodies. Today, the Lake city houses 11 lakes in the old core and a total 35 lakes in its district. These lakes were perceived as hubs for preservation of ecology, however in the recent past, development has crawled up to the banks of lakes. Resulting in conversion of once a thriving waterbody into mere water tanks which are prone to degradation through developmental pressure and inappropriate governmental and other stakeholders’ approach. 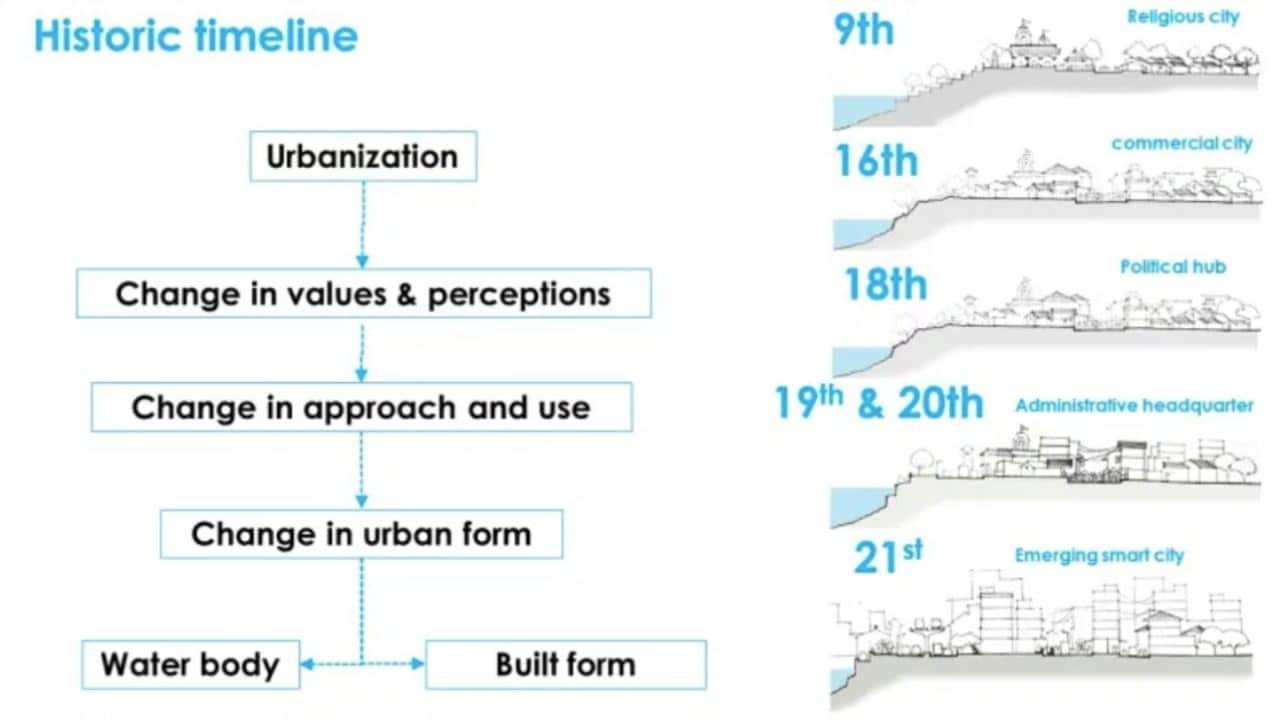 The recent measures by the government like lake beautification seem to be shallow, as they miss out the root cause of the issue. Hence, it is important to understand that the planning and development must integrate the ecological systems and values within the urban landscape rather than completely ignoring, bypassing or replacing them.

My vision for Mumbai’s green recovery

We generally forget that the lake catchment area itself is an entire ecology. Various factors like hard and softscapes, built vs unbuilt, land use, nature of hydrology in the catchment etc. have a crucial impact on the actual lake. Hence, a broader understanding is necessary in planning for urban water bodies. Therefore the interventions are taken at both macro and micro scale. On a macro level, an attempt has been made to create a 4 km long pedestrian green corridor along the Nalla, purifying it with decentralized purification techniques. This larger strategy tries to solve the pedestrian and vehicular issues, and also shortens the walking distances in the core city, to lead towards an ecologically sensitive walkable city core. In the ecological revival of the lake, maximum emphasis has been given on the revival of the natural edges followed by native submergent, emergent and riparian buffer plantation. Care has been taken to minimize a direct human intervention with the water body. However, the visual connections are uninterrupted. After studying built forms, land use and surface nature, the redevelopment of the government residential quarters has been proposed with certain guidelines and policies about open spaces in order to increase the porosity of the ground along with the better quality of life and spaces.

The Jail lake in Thane is taken as a case for lake rejuvenation program from an ecologically sensitive approach. The lake is situated adjacent to a jail and surrounded majorly by residential and governmental land use, while it is currently abandoned. The Lake once was a rich ecological habitat. Even After getting a National Lake Conservation Policy grant, the lake suffers pollution, ecological losses due to sheer neglect of stakeholders and their inappropriate narrow perspective.The whole lake precinct is expected to behave as lungs to the city, hence the jail precinct has been converted to the urban forest amidst the concrete city. We understand that the issue of degradation of urban water bodies is mammoth one. The piecemeal approaches towards its restoration are found to be insufficient to solve the problems at a larger level. To conclude with, our cities need a comprehensive ecological planning approach for the city, keeping the water bodies at its center as an important land feature in planning strategies at both regional and local level.

The author is a young urban designer from Mumbai, with the Kamla Raheja Vidyanidhi Institute for Architecture and Environmental Studies. Hajare is among a group of young architecture and planning students who have shared his ideas on sustainable development for Mumbai for the Ministry of Mumbai's Magic.