Alan Turing: How the world's most famous codebreaker unlocked the secrets of nature's beauty

Alan Turing may be best known for decrypting German messages created by their enigma machine in World War II.

Getting out into nature may seem a world away from a maths classroom. But the beauty that surrounds us has order – and one of the world’s best codebreakers was the key to unlocking it.

Alan Turing may be best known for decrypting German messages created by their enigma machine in World War II. But the influential scientist thought about the interaction between nature and mathematics in great depth before his untimely death in 1954. In fact, his last published paper became one of the founding theories of mathematical biology, a subject devoted to understanding how nature’s mechanisms work by finding equations that describe them, from species population changes to the way cancerous tumours grow. 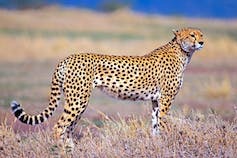 No need to call the fire brigade.
rokopix/Shutterstock
Turing proposed that two biological chemicals moving and reacting with each other in a mathematically predictable way could explain shapes and patterns across nature. For example, imagine that a cheetah’s coat is a dry forest with chemical “fires” breaking out all over. Simultaneously, firefighting chemicals of a second type work to surround and contain these fires, leaving charred patches – or spots – in the furry landscape.

Turing came up with two equations that model what kinds of patterns would be produced as both the concentration of the two chemicals and the speed at which they diffuse changes. However, it was incredibly difficult to solve these complex equations with the primitive computing machines around at the time. Turing did undertake the painstaking task once though, producing a dappled pattern that resembled a cow’s skin.

Aided by modern computers, scientists have shown that Turing’s equations can be used to mimic countless two-dimensional patterns seen across the natural world, from fingerprints and the coats of animals to semi-arid landscapes.

Showing that the reactions and movements of chemicals is actually behind the creation of nature’s patterns was more difficult. For example, we can’t watch how the spots of cheetahs develop in the womb. Even observing the growing angel fish’s remarkable patterns change as they develop from juvenile stage to adulthood doesn’t provide proof that a dance of two activator inhibitor chemicals is at work.

Recently though, Turing patterns in hair follicles, chicken feathers, and teeth-like shark “scales” have all directly been shown to be produced by the interaction between an activator and an inhibitor chemical.

Of course, nature is rarely as simple as two chemicals interacting in isolation. Scientists have now extended Turing’s theory to explain more complex systems such as mussel beds, which extend for hundreds of metres in a large Turing pattern, and display a completely different type of pattern at a smaller scale. A four-chemical version of the theory also accurately models the formation of ridges in a vertebrate’s mouth.

Interestingly, we can also apply Turing’s work to a whole range of non-visual patterns. For example, my research explores how we use them to model the territory patterns of animals. Instead of describing the concentration and reactions between chemicals, we’ve used similar equations to describe the probability of the location of individuals, and the interactions between each individual and its environment.

As you can imagine, the equations are often highly complex, as multiple factors influence an animal’s movement, from the scent marks and physical presence of other animals to the location of prey and even memory.

But the movement patterns predicted by equations that model these factors compare surprisingly well to the actual movement of animals in an area. As well as being fascinating in itself, research like this can help us understand how changes in the habitat of a species affect wider ecosystems – which could be highly important considering the threat of extinction climate breakdown poses to hundreds of thousands of species.

This method of modelling territory patterns can even be extended to human populations. For example, one piece of research showed that the movement of Los Angeles gang members can be accurately predicted by equations that model the central location of their gang and the graffiti tags of other gangs.

Perhaps not even Turing would have imagined just how many of nature’s beautiful secrets his seminal paper would unlock. And it’s not just mathematical biology to which he made a defining contribution – we have his genius to thank for so much more. Thanks Alan.