NASA released images that show a significant decrease in nitrogen dioxide levels all over the country.

A recent study ranked China as the 11th most polluted country in the world, and many of its cities (14 of them), made an appearance on the list of the world’s highest polluted cities.

NASA recently published images from China that show a significant decrease in the amount of nitrogen dioxide (NO2) over the country. The space agency believes that this decrease can be directly correlated to the shutdown of factories and the economic slowdown that has occurred due to the spread of COVID-19.

According to Earth Observatory, nitrogen dioxide is a noxious gas emitted by motor vehicles, power plants, and industrial facilities. 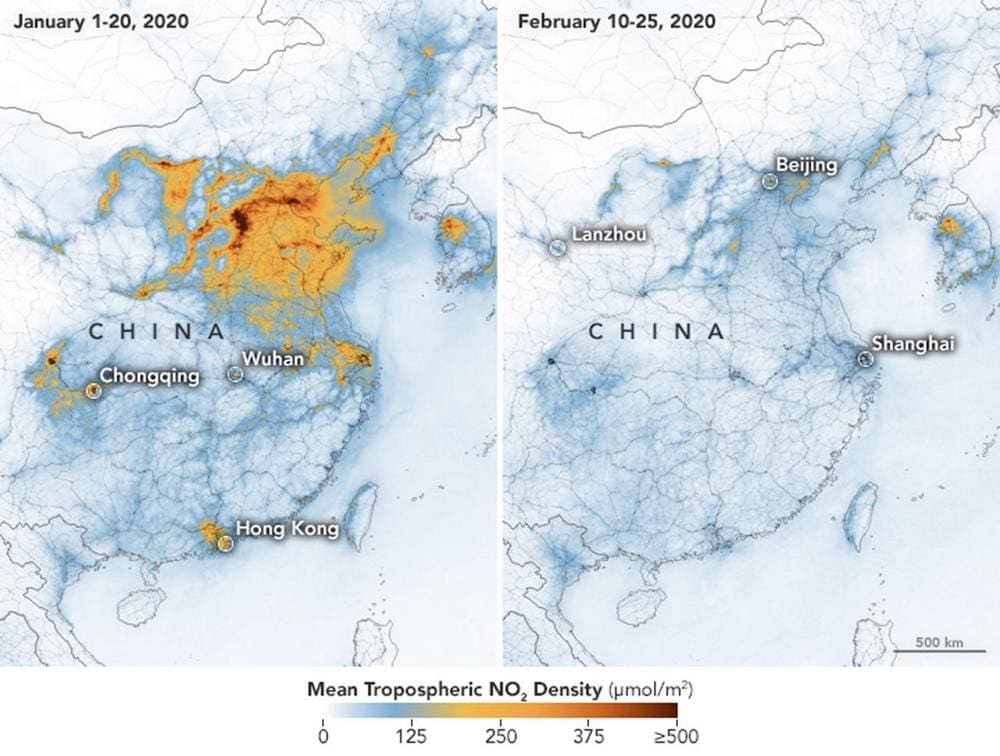 The before and after images that show the decrease in air pollution in China. Image credit: NASA/Earth Observatory

The before and after images show a vast contrast in the amount of NO2. Images take on 1-20 January 2020 (before) show a high concentration of NO2 density over the cities of Wuhan, Hong Kong, Beijing and Chongqing. In the images taken from 10-25 February 2020, the amount of pollutants is almost negligible.

To help in stopping the spread of COVID-19, china had undertaken an unprecedented lockdown of the city of Wuhan, which was the epicentre of the virus breakout. City-wide quarantines followed in other parts of the country as well. Transportation in and out of cities, public gatherings and many offices, factories and industries were shut down.

According to a statement, NASA scientists said that the reduction in NO2 pollution was first apparent near Wuhan but eventually spread across the country.

Usually, there is a drop in NO2 during the Chinese Lunar New Year since many businesses shut shop to allow for the celebration. However, scientists have never seen such a drastic drop.

“This year, the reduction rate is more significant than in past years and it has lasted longer,” Fei Liu, an air quality researcher at NASA’s Goddard Space Flight Center, said in the statement. “I am not surprised because many cities nationwide have taken measures to minimize the spread of the virus.”