The programme has broken norms set by Kyrgyzstan's frequent stories of discrimination & violence.

There are thirteen countries in the world that have built and launched satellites into space. Over 70 countries have space agencies of their own.

In under two years, Kyrgyzstan could join the ranks and become a country with stakes in space, with its first official space programme powered by a team of young women.

The 'Kyrgyz Space program' (unrelated to the brilliant Kerbal Space Program) is unique in many ways, and is gathering international praise for the multiple norms it is out to shatter. Driven by a motivated team of women aged between 17-25 years, the space programme is completely crowd-funded. Meeting twice a week in a training course, the group has decided to set its eyes on building the country’s first cube satellite (CubeSat) and send it to orbit by 2020.

The programme is part of a satellite-building course hosted by Kloop Media Foundation. Kloop is a media, journalism and training organisation in Kyrgyzstan with a reputation for being vocal and one of the most feminist-friendly, LGBT-friendly media agencies in Asia. One of the space program's new members in the middle of a 3D printing class. Image courtesy: Patreon/Kyrgyz Space Program

“We have the largest number of female camera operators, for example, and our sports editor is an 18-year-old girl. We also have a brilliant video engineer who is also a young woman,” Bektour Iskender, one of the agency's founding members was quoted to have said in a TED report.

Kloop started new programmes aimed at girls in STEM in 2016. Among them was a satellite-building school that would train young women in robotics and coding and help them put in the (wo)man-hours to put Kyrgyz’s first ever CubeSat in orbit. 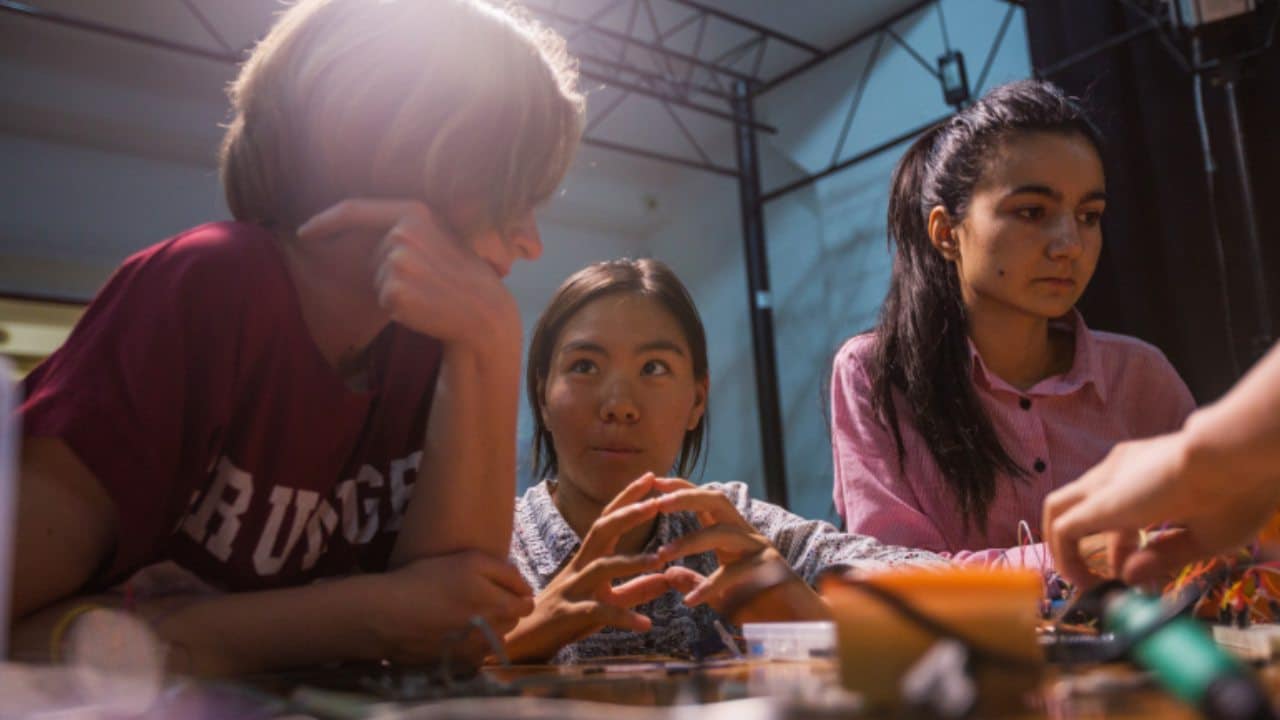 Some of the girls selected for the programme already understand basic IT and believe that women in hard sciences are as competent as men are. Image courtesy: Kloop Media

With fundraising underway, the girls are currently three months into a training program in basic electronics, physics and 3D printing.

They are mentored by a leading technology journalist and trainer at Kloop as well as experts and experienced engineers that have helped send microsatellites to space before. The progress of the country's space programme depends entirely on funds raised on Patreon.

The team’s next target is an additional $1,500 a month to bring in trainers from Lithuanian startup, NanoAvionics, which launched its country’s first CubeSat in 2014.

A total of $5,000 per month will arm them with all the resources needed to build the CubeSat.

And ultimately, the $10,000 per month target will help fund a lift to the ISS and have it launched into orbit.

While Kloop and the team are setting reasonable expectations for Kyrgyzstan's first mission, plans for a second are already in the works.

"They’re exploring the idea of directing the sun’s rays toward orbiting garbage to vaporize it and using the energy to propel the CubeSat,” Iskender told TED in a recent interview.
A second possibility is a mission to image the Tibetan plateau from a satellite — among the least-photographed places in the world — from space.

While there is plenty still left to work on, the group posts mission updates every so often when they manage to get hold of an English-speaking volunteer.

The first-of-its-kind space programme is a major step in rebuilding the country's reputation for gender discrimination, domestic violence, child marriage and kidnappings.

"Having Kyrgyzstan’s first space programme be launched by young women — it destroys all the norms beautifully.”

Flying high: Nexus One is part of a space mission

ISRO's heaviest satellite GSAT-11 launch on Ariane-5 rocket on 5 Dec: All you need to know