The fires have reduced a wet forest ecosystem, rich in wildlife, to a dry scrub more flammable than the original forest.

Images of desperate, singed koalas in blackened landscapes have come to symbolise the damage to nature this bushfire season. Such imagery has catalysed global concern, but the toll on biodiversity is much more pervasive.

Until the fires stop burning, we won’t know the full extent of the environmental damage. But these fires have significantly increased the extinction risk for many threatened species.

We estimate most of the range and population of between 20 and 100 threatened species will have been burnt. Such species include the long-footed potoroo, Kangaroo Island’s glossy black-cockatoo and the Spring midge orchid. The fires are exceptional: way beyond normal in their extent, severity and timing. The human and property losses have been enormous. But nature has also suffered profoundly. We must urgently staunch and recover from the environmental losses, and do what it takes to avoid future catastrophes.

The fire and its aftermath

One estimate last month put the the number of birds, mammals (other than bats) and reptiles affected by fire in New South Wales alone at 480 million. The toll has risen since.

Most will have been killed by the fires themselves, or due to a lack of food and shelter in the aftermath.

Some animals survive the immediate fire, perhaps by hiding under rocks or in burrows. But the ferocity and speed of these fires mean most will have perished. 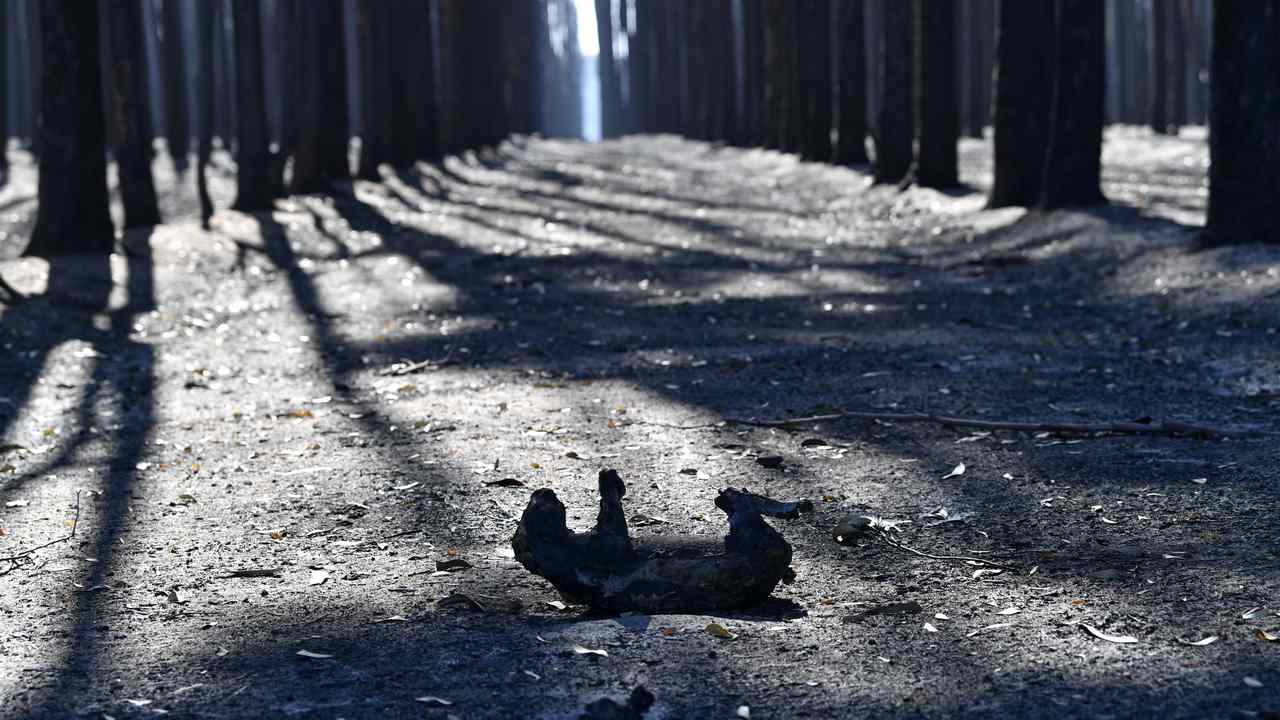 A dead koala after bushfires swept through on Kangaroo Island on January 7. Image credit: DAVID MARIUZ

One might think birds and other fast-moving animals can easily escape fires. But smoke and strong winds can badly disorient them, and mass bird deaths in severe bushfires are common.

We saw this in the current fire crisis, when dead birds including rainbow lorikeets and yellow-tailed black-cockatoos washed up on the beach at Mallacoota in Victoria.

Fire impacts are deeply felt in the longer-term. Many habitat features needed by wildlife, such as tree and log hollows, nectar-bearing shrubs and a deep ground layer of fallen leaves, may not develop for decades.

Populations of plant and animal species found only in relatively small areas, which substantially overlap fire-affected areas, will be worst hit. Given the fires are continuing, the precise extent of this problem is still unknown.

We estimate most of the range and population of between 20 and 100 threatened species will have been burnt. The continued existence of such species was already tenuous. Their chances of survival are now much lower again. For example, the long-footed potoroo exists in a very small range mostly in the forests of Victoria’s East Gippsland. It’s likely intense fires have burnt most of these areas.

On South Australia’s Kangaroo Island, one-third of which burned, there are serious concerns for the Kangaroo Island dunnart, an endangered small marsupial, and the endangered glossy black-cockatoo, whose last refuge was on the island. Both species have lost much of their habitat.

Many threatened plants are also affected: in NSW, fires around Batemans Bay have burnt some of the few sites known for the threatened Spring midge orchid.

Fire has long been a feature of Australian environments, and many species and vegetation types have adapted to fire. But the current fires are in many cases beyond the limits of such adaptation.

The fires are also burning environments that typically go unburnt for centuries, including at least the perimeter of World Heritage rainforests of the Lamington Plateau in south-eastern Queensland. In these environments, recovery – if at all – will be painfully slow.

The shortening intervals between fires are also pushing some ecosystems beyond their limits of resilience. Some iconic Alpine Ash forests of Kosciuszko have experienced four fires in 20 or 30 years. This has reduced a grand wet forest ecosystem, rich in wildlife, to a dry scrub far more flammable than the original forest. Such ecosystem collapse is all but impossible to reverse.

Fires also compound the impacts of other threats. Feral cats and foxes hunt more effectively in burnt landscapes and will inexorably pick off wildlife that may have survived the fire.

What does this mean for conservation?

In a matter of weeks, the fires have subverted decades of dedicated conservation efforts for many threatened species. As one example, most of the 48,000 hectares of forest reserves in East Gippsland established last year in response to the rapid decline of greater gliders has been burnt. This has further endangered the species and makes the remaining unburnt areas ever more critical.

Beyond counting the wildlife casualties, responses are needed to help environmental recovery. Priorities may differ among species and regions, but here is a general list: Some of these actions may be mere pinpricks in the extent of loss. But any useful action will make a small difference, and perhaps help alleviate the community’s profound sense of dismay at the damage wrought by these fires.

Governments, conservation groups and landholders must all play a role. Recovery actions should be thoughtfully coordinated, and form part of the broader social and economic post-fire recovery program.

Critically, we must also reduce the likelihood of similar catastrophes in future. Some have blamed the fires on national parks and a lack of hazard reduction burning. Skilful and fine-scale application of preventative burning does have merit. But such measures would not have stopped these fires, and the number of days suitable for such burning is diminishing.

Increasingly severe drought and extreme heat, associated with global warming, are the immediate causes of these wildfires and their ferocity. To prevent this fire-ravaged summer becoming the new normal, we must take drastic measures to tackle climate change.