Editor's Note: This story was originally published on 30 September 2019 and has been republished in light of World Polio Day on 24 October 2019.

Public health organizations around the world have been fighting for the global eradication of polio since 1988. Through massive vaccination efforts, the incidence of polio has gone down 99 percent since then, with the virus eradicated from most of the countries on Earth.

But there have been many setbacks.

One particularly serious threat has surfaced over the last 15 years. Among poorly vaccinated populations, an increasing number of polio cases are due to strains of the virus that originated from one version of the vaccine itself. The Sabin vaccine, which is taken orally, is composed of live but weakened viruses that won’t sicken recipients but will still create lasting immunity against polio. 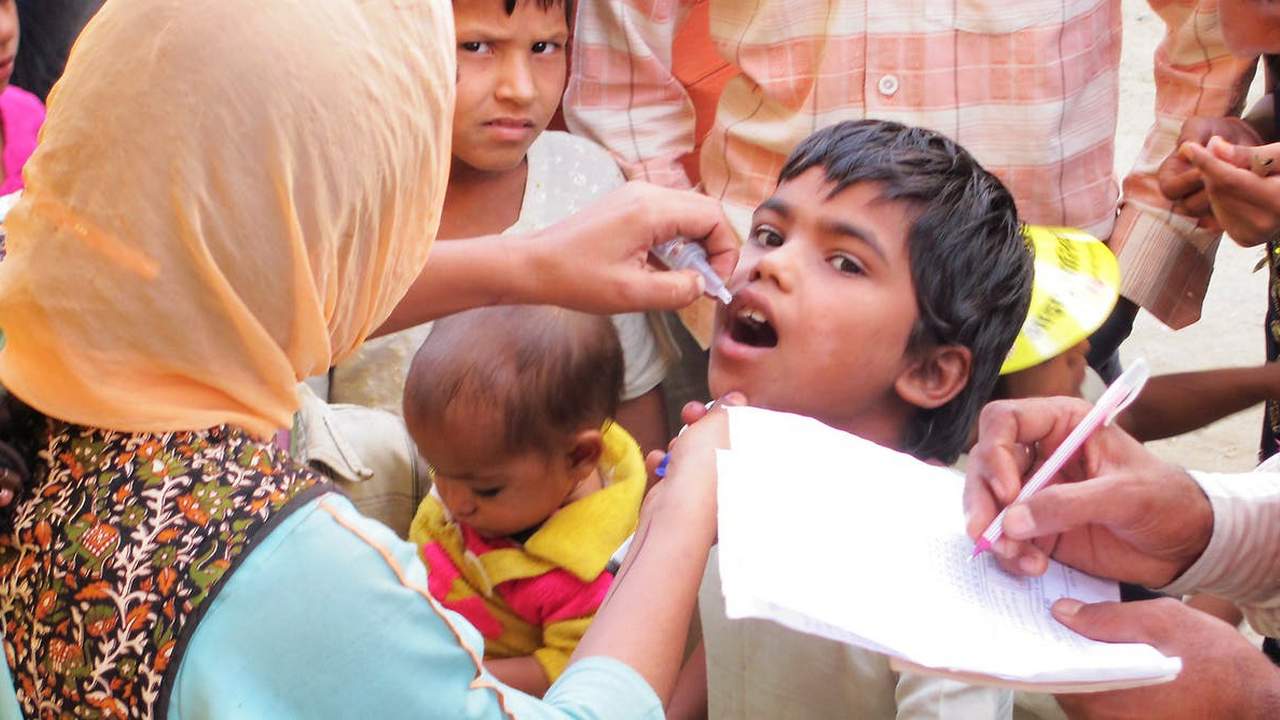 The oral polio vaccine is most commonly used in the developing world, despite one big problem. image credit: CDC/Alan Janssen, MSPH, CC BY

However, through genetic changes, the weakened vaccine virus can reacquire the ability to cause paralytic polio. How this happens and how to prevent it are under active research. A new vaccine deliberately constructed to prevent the poliovirus from regaining virulence may be the answer.

Virus in vaccines attenuated or killed

The virus that causes polio infects the cells of the throat and intestine. People usually catch it by ingesting food or water contaminated with fecal matter from an infected person.

Most people infected with the polio virus have no symptoms at all; about a quarter of infections result in flu-like symptoms. However, in about 1 out of every 200 cases, the virus invades the cells of the central nervous system, causing paralysis.

Poliovirus is a very simple virus. It is composed of a shell, or capsule, made of protein. Inside the capsule is a single strand of ribonucleic acid, or RNA, that encodes the genetic information to make new virus particles. There are three poliovirus strains – PV1, PV2 and PV3. Immunity to one strain does not confer immunity to the other two, so both the original Salk and Sabin vaccines included all three.

The Salk vaccine, which is injected, is composed of killed viruses; the Sabin vaccine, taken orally, contains live but weakened viruses. Such weakened vaccine viruses are known as “attenuated.” The oral vaccine is both more effective and easier to administer than the injected vaccine, and so it has been the primary weapon for worldwide eradication of polio.

Once a child is immunized with the oral polio vaccine, the weakened virus lives in their intestine for several weeks, allowing the child to develop immunity by building up antibodies. During this time, recipients shed live viruses in their feces. The weakened viruses in the vaccine itself do not cause polio, and this shedding can help to immunize unvaccinated people that come into close contact with recently vaccinated individuals. 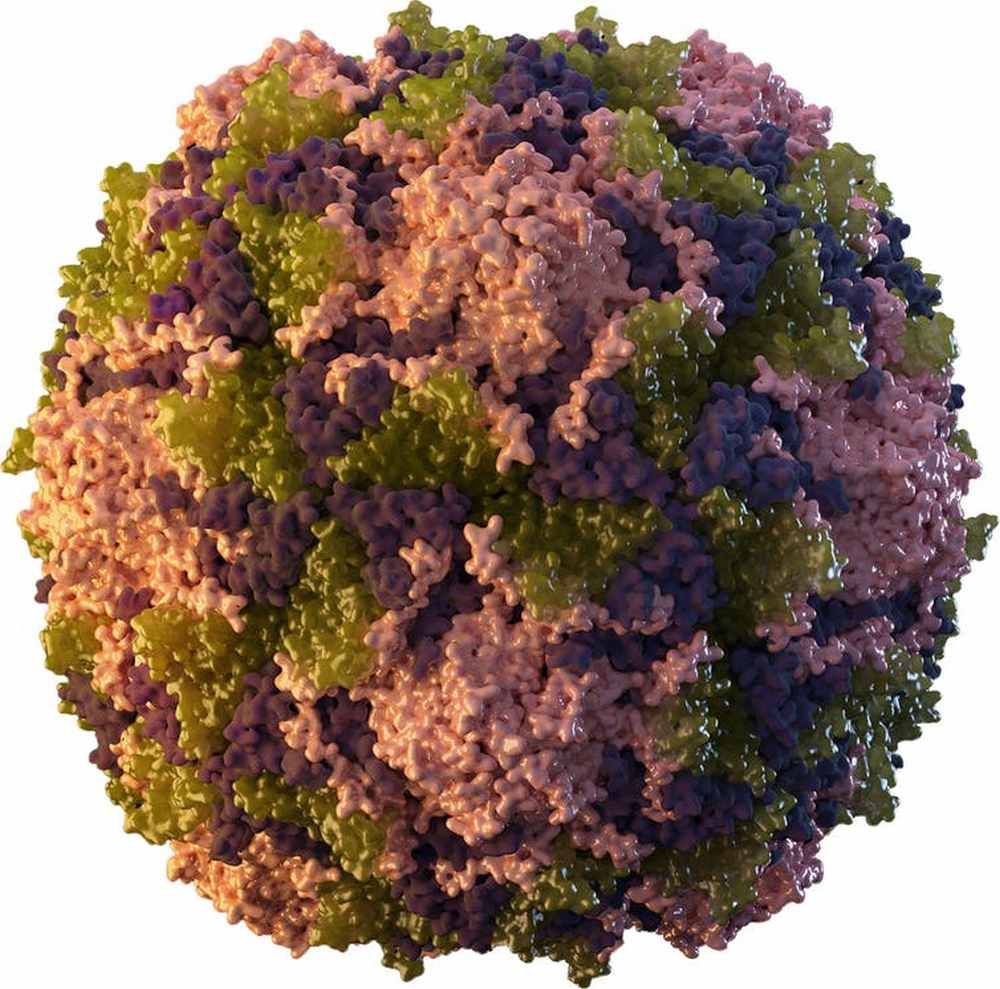 But shortly after the oral vaccine became widely used in the early 1960s, researchers discovered that some shed viruses had reacquired the ability to cause paralysis.

As the viruses multiply in the intestine, they undergo genetic changes, some of which can reverse or circumvent the original genetic changes that had made them less virulent. These vaccine-derived virulent viruses very rarely cause their vaccinated host to get polio, but, when they circulate in the population, they put unvaccinated individuals at grave risk.

Because of this risk, most developed countries, including the United States, have stopped using the oral Sabin vaccine, relying instead on several injections of the Salk vaccine. However, oral polio vaccine is still the most available, and reliable, vaccine in developing countries.

One of the polio strains – type 2 polio, or PV2 – was declared eradicated worldwide in 2015. The challenge then became preventing new cases of type 2 polio that could stem from virus shed by newly vaccinated people.

To prevent these new cases of vaccine-derived type 2 polio, the World Health Organization campaigned to replace the standard oral polio vaccine with one consisting of only PV1 and PV3. This switch was completed in 2016.

Unfortunately, the vaccine-derived type 2 poliovirus continues to circulate and cause paralytic polio. Globally, 104 polio cases due to this virus occurred in 2018, which was three times the number of cases due to wild viruses not derived from the vaccine. As the number of children who have no immunity to type 2 poliovirus increases, this number may rise.

Health officials are campaigning to eliminate all oral vaccines and rely on injected vaccines containing killed virus. However, this plan imposes logistic and financial burdens on developing countries. Meanwhile, oral type 2 vaccines are needed to stop any outbreaks of type 2 polio. And health officials have not yet figured out how to make sure unvaccinated children don’t get polio from mutated viruses shed by vaccinated people.

But what if researchers created a vaccine from a weakened live virus that’s unlikely revert to virulence? That’s one of the strategies that several research groups are working on now.

As part of this effort, scientists have now mapped out in detail the steps that allow the PV2 vaccine strain to regain virulence.

Just three simple genetic mutations, each of which alone has a small effect, when combined, dramatically increase the virulence of the PV2 strain in mice in the lab. And, all three are found in the viruses shed by recent vaccine recipients. Rather than making the vaccine from purified virus as Albert Sabin did, today’s researchers are tweaking the virus they will use to create the vaccine. image credit: AP Photo/Gene Smith

Virulence can also be reestablished in the intestine if the genetic material of the PV2 strain recombines with that of another virus. The second virus can be the weakened PV1 or PV3 from the vaccine, or a related virus such as coxsackie, a common virus in children.

Designing the virus for the vaccine

Having discovered exactly how the type 2 vaccine virus regains virulence, scientists figured out ways that these specific genetic changes could be prevented. Using the tools of molecular biology, they made four important changes to the PV2 genome that should stop it from regaining virulence.

Part of the virus’s RNA genome has to fold up into a lollipop-like shape in order for proteins to be made. This structure is disrupted in the weakened vaccine strain, but a single mutation in the virulent strain allows it to reassemble. So that can’t happen, the scientists changed the genetic sequence of the RNA in a way that no single nucleotide change would let the RNA fold into the stable lollipop structure again.

Second, they changed the genetic sequence of the enzyme that copies the RNA to make it more accurate. That way fewer genetic mutations would occur in the vaccine recipient’s intestine.

Third, another change to the same enzyme reduced the chance that the virus could pick up genes by recombining with other viruses in the recipient.

And, fourth, they rearranged the virus’s genes so that replacing certain regions of its own RNA with genetic information from a wild virus, such as coxsackie, would be lethal for it.

Researchers have produced two candidate PV2 viruses that grew well in experimental cells, were not virulent in a mouse model and were genetically stable. A phase 1 clinical trial of vaccines made from these viruses showed that they were well tolerated, produced an immune response and had reduced (but not zero) reversion to virulence compared to the original oral vaccine for PV2.

These and other new, rationally designed viruses have the potential to provide good protection from polio with a reduced risk of creating new outbreaks due to circulating vaccine-derived poliovirus.