The commander and the first man on the Moon, Neil Armstrong, passed away in 2012.

Fifty years ago on Tuesday, three American astronauts set off from Florida for the Moon on a mission that would change the way we see humanity's place in the universe.

The crew's surviving members, Buzz Aldrin and Michael Collins, are set to reunite at the same launchpad on Tuesday, the start of a week-long series of events commemorating Apollo 11.

Their commander and the first man on the Moon, Neil Armstrong, passed away in 2012.

But Aldrin and Collins, 89 and 88 respectively, will meet Tuesday at precisely 9:32 am (1332 GMT) at the Kennedy Space Center's pad 39A to kick off the festivities. Their spacecraft took four days to reach the Moon, before its lunar module, known as "Eagle," touched the lunar surface on 20 July 1969. Armstrong emerged a few hours later.

Collins remained in lunar orbit in the command module Columbia, their only means of returning back to Earth.

"They knew, I knew, if they couldn't get off for some reason there was nothing I could do about it," he told reporters in New York in May as part of a series of events. "I had no landing gear on Columbia, I could not go down and rescue them."

Aldrin has remained relatively more elusive but has also taken part in a few events, including a gala dinner last Saturday where the cheapest ticket cost $1,000.

Ageing but active on Twitter, and always seen in stars-and-stripes socks, Aldrin has faced health scares and family feuds, culminating in a court case over finances, which was settled in March.

On Tuesday, he will be the undeniable star of the show, as the second man to have stepped foot on the Moon. Only four of the 12 men who have done so remain alive. 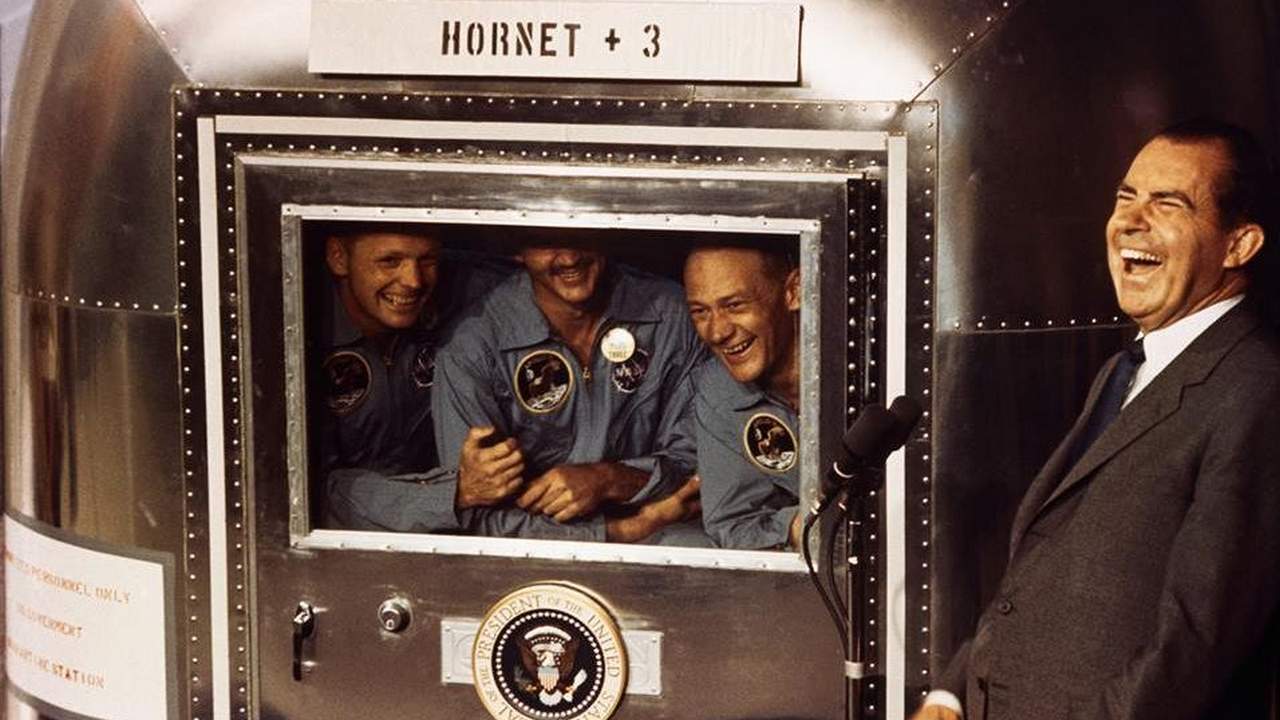 President Richard Nixon greet the astronauts after their return

Despite the festivities, neither the US nor any other country has managed to return a human to the Moon since 1972, the year of the final Apollo mission.

But they both ran up against a Congress that wasn't inclined to fund the adventures, with public opinion markedly changed since the height of the Cold War.

For his part, President Donald Trump relaunched the race to re-conquer the Moon and Mars after taking office in 2017. But the immediate effect has been to create turbulence within the space agency.

Last week, NASA administrator Jim Bridenstine fired the head of the human space exploration directorate Bill Gerstenmaier, likely over disagreements over the 2024 ultimatum set by Trump to return an American to the Moon.

Five years appears unlikely given that neither the rocket, capsule or lander are yet ready or even finalized.

"We don't have a lot of time to waste, if we're going to have new leadership, it needs to happen now," Bridenstine told CSPAN last week.