Xiaomi Mi Soundbar Review: A stylish, affordable soundbar that could have been better

The Mi Soundbar can enhance your TV viewing experience but doesn’t raise the bar in music playback. With the advent of LCD/LED TVs, the picture quality may have gone up several notches but the same cannot be said about their sound output. That is where a soundbar comes into the equation to enhance the audio quality and overall TV viewing experience. Surprisingly and unfortunately, soundbars haven’t managed to gain the kind of popularity they should have in India. Blame it on lack of awareness, limited options or their high prices, but the fact remains that the percentage of adoption is really low in our country. Their fortunes have seen a bit of upswing since last year, and players like Xiaomi entering the segment might prove to be the catalyst they need for their growth. 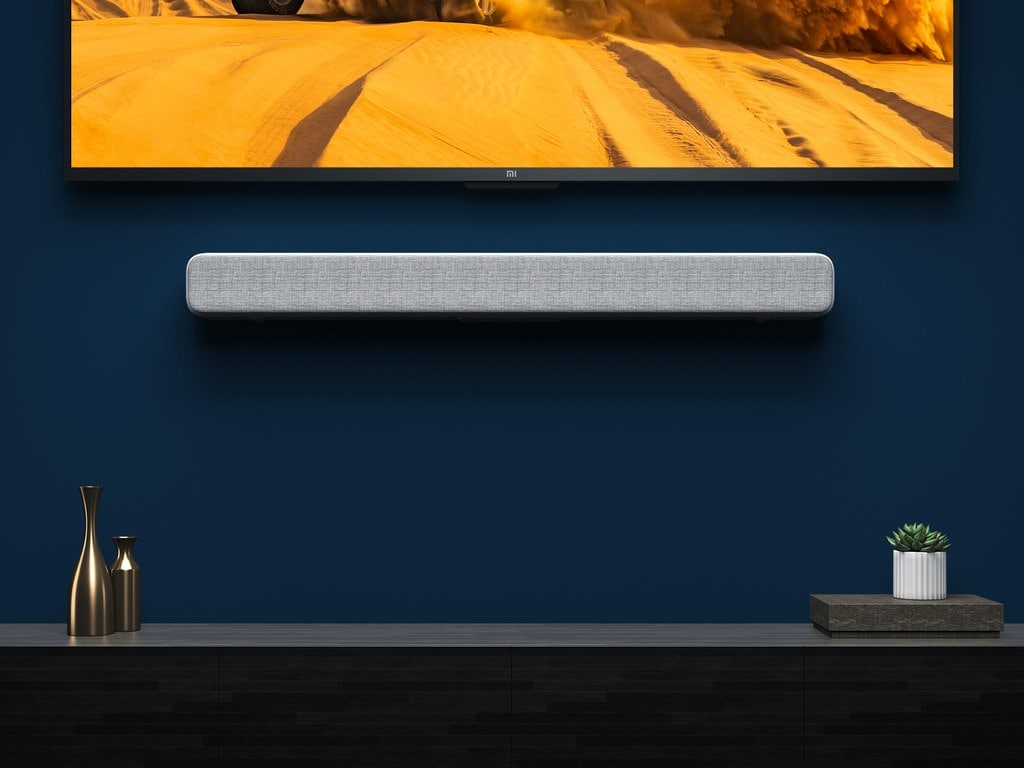 Very recently, Xiaomi launched an affordable soundbar in India called, well, Mi Soundbar. The simplicity of the name also reflects in the design and functionality of the product. Like most of their products, this too is available through the weekly flash sales or their offline stores. Let’s take a closer look at it and see if it’s truly worth trying your luck in the ‘gone in 60 seconds’ sales.

The Mi Soundbar looks quite elegant in an all-white body with a grey fabric mesh at the front and rounded edges. It is quite long with a couple of inches short of 3 feet in length. That’s almost the length of a 40-inch TV. It weighs just under 2 kilograms and is easy to carry around from one room to another or lug it around to a friend’s place. You can place it on a desk with its rubber feet holding it firmly in place and preventing it from skidding. It can also be wall mounted and Xiaomi has bundled the necessary screws in the package. The input ports are placed at the back of the soundbar with enough space left to connect the cables in case you choose to wall mount it. There’s also a power switch at the back. Buttons for each of the input sources along with equal number of tiny white LEDs are placed at the top of the speaker. Volume up and down push buttons can be found on either side of the source buttons. There is no display of any kind to show the volume level or any other detail, something that I would have personally preferred. The company has chosen to go absolutely minimalistic with this soundbar, barring the connectivity options.

There are plenty of connectivity options on the Mi Soundbar. You get Bluetooth 4.2, Aux in, Coaxial line in, SPDIF and Optical in. One of the more commonly found input options – a USB port is missing here. Xiaomi claims to have fitted the soundbar with 8 drivers. You get a pair of 2.5-inch drivers, a pair of 20mm tweeters and 4 passive radiators for the bass, each measuring 70 x 55 mm in dimension. The rated frequency response ranges between 50 Hz and 20 KHz. The output power is rated at 28 Watts RMS. This soundbar isn’t Dolby certified, nor is there a mention of any other popular sound standard.

One notable absentee here is a wireless remote control. More on that a little later. There are no bass or treble controls or any equalizer presets either on this sound bar.

I tried multiple input sources to test the soundbar. I connected the set-top box using a line in for TV viewing experience. Then I plugged in the bundled SPDIF cable into Xiaomi’s latest Mi 4X Pro smart TV for watching some HD movies and streaming online content. And lastly, I played the various genres of music over Bluetooth. My overall experience was a mixed bag which I shall elaborate as we go ahead.

Despite the presence of multiple drivers, the dynamic range of this soundbar is fairly limited. The highs are decent but a tad shrill and often overpower the upper mid-range frequencies. The lower mids and lows tend to entangle quite a bit, thus compromising on clarity. The vocals are fairly clear and the bass can be a hit or a miss depending on what you play on it. While the passive radiators add a fair degree of warmth to the sound, they cannot add up to provide the kind of deep bass a separate subwoofer can. So do not expect room shaking thump here. As long as you play audio at around 50 to 60 percent of the peak volume, the highs, mids and lows coexist reasonably well. But beyond that, the highs dominate other frequencies and the bass feels inadequate.

But let’s get a little realistic. This is a budget soundbar and there are hardly any from the competition that come with a subwoofer in this budget. Having said that, it is equally necessary to manage your expectations. If you need a soundbar to enhance your TV viewing experience, the Mi Soundbar is a good option as it adds a significant amount of depth and loudness to the sound. It is pretty decent for watching movies too but don’t expect a home theatre like experience. I know it’s obvious, but marketing often tends to mess with one’s expectations, so it is better to clarify.

Music playback is its weakest link. It can handle some soft music or classic Hindi songs fine, but if you are into rock, hip hop or heavy metal, this is not the speaker for you. As the number of instruments increase or the track gets bass heavy, the sound starts to get more jarring. As I mentioned earlier, there are no sound adjustments like bass/treble control or even equaliser presets on this soundbar to tweak the sound as per one’s taste. So you have to live with the way it’s tuned out of the box. If listening to music is your topmost priority, this is not the speaker for you.

Its overall sound quality is something I can still live within this budget, but there’s something that can be a borderline deal-breaker for some. And that’s lack of wireless remote control. A lot of sound sources do not have their own volume control and it needs to be controlled directly from the speaker. Case in point - optical out of several TVs, Amazon Fire TV stick synced over Bluetooth or even SPDIF out, including the one on Xiaomi's own TV. In such a scenario, one has to walk over to the soundbar to reduce or increase the volume every now and then. Same goes for changing the input source. A simple IR remote would have been more than handy. In fact, it’s a necessity, I would say.

The Mi Soundbar is priced at Rs 4,999 and is available through Mi India website and Mi Home stores. At that price, you get a soundbar with an elegant design, multiple audio inputs and decent sound. The sound quality isn’t spectacular but just about par for the course in this budget. In quest of simplicity, Xiaomi has chosen to not include some useful features such as bass/treble controls or equaliser presets. But the exclusion of a wireless remote control is unacceptable. If you are looking for a soundbar under Rs 5,000, primarily to enhance your daily TV viewing experience, the Mi Soundbar is a good option or perhaps the only decent option in this budget.

If you have a couple of thousand bucks more to spare, you should opt for the Blaupunkt SBW-01 soundbar instead on Flipkart. Its price fluctuates between Rs 5,999 to Rs 7,499. That too has multiple inputs, including HDMI and USB, a full function remote control, much higher 80 Watts RMS output and comes with a dedicated subwoofer. More importantly, it sounds way better than the Mi Soundbar in every department for just a small premium.

All said and done, the Mi Soundbar is a good first attempt by the company in this segment. Like most of their products, I hope they come out with a Pro version of this soundbar too that addresses all its shortcomings. Though I wasn’t overly impressed with this product, I have seen enough that makes me want to look forward to its next iteration.

Cloudwalker Burst E3000 Soundbar Review: Appeals more to the eyes than the ears