Vu Pixelight 55-QDV offers a couple of useful features missing from its official Android TV cousin. But is it truly a better alternative? Last month, we reviewed the Vu 55-OA official Android TV that was an impressive package overall but missing a couple of features like support for Netflix and Amazon Prime Video. Vu, through its new Pixelight 55-QDV 4K LED Smart TV looks to plug those holes and offer a simpler viewing experience for the users for a few thousand Rupees lower. Let’s see how this compares with its official Android cousin and if it’s truly a viable alternative in the Smart TV market in general. The Pixelight 55-QDV looks pretty neat with narrow titanium grey metallic bezels around the 55-inch screen. The bottom bezel bears the company logo along with a power LED and a power button underneath. While most TVs are trying to get slimmer these days, this one heads in the opposite direction and is significantly bulkier than most 55-inch smart TVs that I have tested, including the Vu 55-OA. Unlike the company’s official Android model, the input/output ports aren’t placed closer to one of the edges for easy access. They are a good 15 to 18-inches inside and can be hard to reach if you choose to wall-mount the TV.

Also, the metal stands have been replaced by thick plastic ones. They are sturdy enough and hold the TV firmly in place without a wobble. But metal is metal and you feel more assured. Of course, all this wouldn’t matter if you choose to put the TV on a wall. The necessary screws, as well as the wall mount, are provided in the bundle. The VU 55-QDV has a 55-inch Ultra HD (4K) panel with a resolution of 3,840 x 2,160 pixels with HDR10 compliance. Again, the company doesn’t specify the panel type except that it’s a High Bright A+ grade panel with Direct LED backlighting. It seems to be an 8-bit VA panel. A pair of stereo speakers claim to deliver 24 Watts RMS audio output, just like the Vu 55-OA. This Vu TV is powered by a dual-core CPU with 1 GB RAM and 4 GB of internal storage. The OS here is neither pure Android nor is it Android based. It is based on a Linux kernel for which the above-mentioned processing hardware provides sufficient muscle for smooth operation.

The TV does come with preloaded apps for Amazon Prime Video, Netflix and YouTube, among others. You also get dedicated keys for those three on the remote control. There is a VEWD app store but application support is very limited as of now. You do get apps for services like Zee5, Eros Now, Plex preinstalled but apps for several popular online streaming services like Hotstar, Sony Liv, Voot etc. are unavailable for this platform. Same goes for a lot of other apps too, including popular media players like VLC. The wireless remote control here is far from minimalistic and comes with tons of options including the aforementioned shortcut keys for Prime Video, Netflix, YouTube and Apps menu. You also get dedicated keys for playback controls, input selection, navigation and settings. A pair of AAA batteries has also been bundled. The remote is well built and the keys are nicely spaced out. However, one major issue I had with the remote is that it’s the old IR (infrared) type and not RF or Bluetooth. I am so habituated to not pointing the remote at anything specific when using it courtesy of an Amazon Fire TV Stick and other TVs I have been testing over the past year or so that pointing the remote towards the IR receiver all the time when using it can be a pain in the arm. Vu should have at least opted for an RF receiver if not Bluetooth.

You get a good spread of connectivity options on the Vu 55-QDV. There are 3x HDMI ports, 2x USB ports, one RJ45 LAN port, one A/V in, a component in, optical out and a 3.5 mm headphone jack. One of the HDMI ports also supports ARC. One notable absentee here is Bluetooth connectivity. So you cannot connect it wirelessly to Bluetooth enabled soundbar, speakers or headphones. 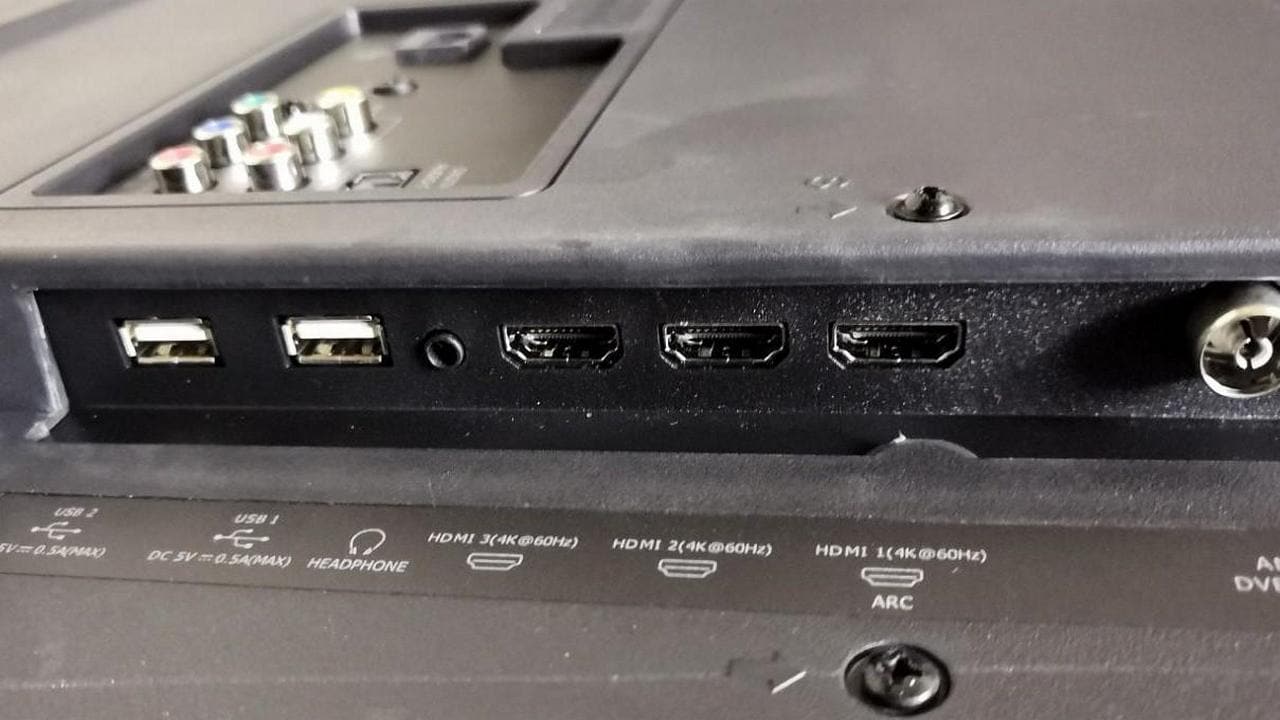 The TV supports Wi-Fi 802.11 b/g/n standards and connects at 2.4 GHz. There is no Wi-Fi ac dual-band support for 5 GHz networks. As I mentioned earlier, this TV’s user interface is built on top of a Linux kernel. It is minimalistic with very limited options and hence is easy to use even for novice users. However, there are ample options to tweak and fine-tune the picture quality if you have the patience.

Just like the Vu 55-OA, this too has a 4K panel but the overall picture quality is a notch lower, especially the contrast. The colours are reproduced well and look natural. However, the contrast is dodgy. The dark areas look a bit too dark and there’s a noticeable loss of detail in dark scenes. Manually adjusting picture settings didn't help much either. One thing you can do to remedy this to a great extent is set the picture preset to Dynamic instead of Standard. There is a noticeable improvement in contrast, however, the colours look a touch blown out in that mode. To fix the colours, this TV provides you with a Colour Tuner and White Balance adjustments. However, that involves lots of trial and error and can test your patience. But at least the options are available, which is good. Understandably, 4K videos look very good on the Vu 55-QDV with vibrant colours and sharp picture quality. 1080p Full HD videos look good too. But 720p videos can be a hit or a miss with the aforementioned contrast issue even more noticeable. Anything lower looks really fuzzy and washed out. You do have normal and MPEG noise reduction settings but they are not of much help when viewing non-HD content. One good thing about this TV is that it offers you picture adjustment options even while watching videos from any source or app. All you need to do is press the settings button on the remote and choose the option you want to adjust without exiting the video.

The TV has a pair of stereo speakers that deliver a total rated output of 24 Watts RMS. Just like in the case of Vu 55-OA, the speakers on this TV too, produce good quality sound, but the output is not loud enough at most times. More often than not, you will need to bump up the volume beyond the 50 percent mark, at times even 100 percent. Something very similar was observed in the other Vu TV I tested last month too. But given that this TV is bulkier and has more space within, I was expecting better sound output.

Sound is an integral part of high-res videos, and the company during the launch had mentioned putting more emphasis on it in their new range. While the sound clarity seems better than other TVs, it just isn’t loud enough on most occasions for an immersive experience when streaming videos via online services or playing them through USB. However, the output was reasonably loud when playing DTH content on it via HDMI.

The TV takes about 30 seconds to boot up and get to the home screen when you switch the power on from the mains, which is above average for smart TVs. But post that, if you switch it off and on from the remote control, the TV comes back on in 5 seconds flat from standby mode. But it resets to the source screen if there is no active HDMI source. Still an acceptable option rather than waiting for 30 seconds or more for it to reboot.

Video file format support through USB is excellent and it played every file with various codecs I threw at it smoothly through its default player, including 4K videos. That comes as a relief because unlike Android TVs, you cannot install a different player like VLC on this TV. You can control the playback using the dedicated playback buttons on the remote.

Unlike most official Android TVs, this TV boasts of support for Amazon Prime Video and Netflix right out of the box. The services are available literally at the click of a button, which is great. Apps for both services are well designed for TV and not half-cooked variants of their mobile versions. They let you watch content up to Full HD. This is a major positive over most official Android TVs that can’t stream these services yet due to various reasons. However, beyond the preinstalled apps, the app support is quite disappointing and you will need to invest in a Fire TV Stick or Google Chromecast to watch content from other services like Hotstar, Sony Liv, Voot etc. That is one major factor you will need to keep in mind before buying this TV. Also, you will have to put up with an IR remote control with no voice input.

The VU 55-QDV 4K Smart TV can be purchased on Flipkart and in VU stores for Rs 33,999 with a one year warranty. That is a good Rs 8,000 cheaper than their official Android TV variant with the same screen size.

So does this offer better value for money courtesy of its lower price tag? Not really. Yes, it’s a lot more affordable and if you only consume content from Amazon, Netflix, YouTube and maybe Zee5 and Hungama, then it’s a very good alternative to an Android TV, and easier to use too. But if you want access to a much larger repository of apps and services, want integrated Chromecast and support for voice commands, then an Android TV is a much better option.