Ultrasone Performance 820 and Sirius Bluetooth review: Bassheads will love this

The Ultrasone Performance 820 triumphs the Audio Technica M50’s in overall clarity of sound, soundstage and comfortable fit and are similarly priced. Ultrasone is a German company well-known for making high-end audio equipment. Today we check out their Performance series P820 closed-back headphone. The headphone is the starting point in the Performance series and has the touted S-Logic Plus Technology. 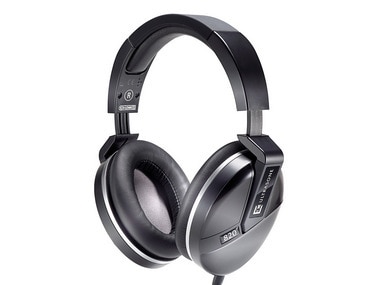 Ultrasone Performance 820 headphones are priced at Rs 9,999 in India

Build and Design: 8/10
The Ultrasone Performance 820 is an attractive looking pair, especially the red variety which was sent to us.

The entire headphone is made of light plastic, therefore keeping the weight down as well as being comfortable at the same time. However, the plastic does tend to make noise when wearing or fiddling with the headphone. In comparison, the Audio Technica M50 has sturdier build quality, although heavier and the clamp force is much higher than the P820, leading to discomfort when wearing the M50’s. Funnily at first, I kept thinking the headphones are badly designed in terms of sound, I kept getting a weird hollow sound as if the music was being played through a tube. After reinserting the cable, I realised the sound completely changed to the original signature. This faux pas is easy to commit since the headphone cable fits in tightly even without twist locking mechanism. Visually, the difference is minimal and the twist doesn’t turn if the cable is not inserted all the way up giving the impression of the cable locking correctly. Invented by Ultrasone, this tech basically sends music around your head not just straight into it. It achieves this by placing the speaker drivers in a decentralized way as compared to regular headphone tech that faces one speaker driver directly into the ears.

This tech aims at better soundstage and a reduction of sound pressure levels at the eardrum reducing the risk of hearing damage while ensuring hours of fatigue-free listening. However, if the headphone is worn hastily off-centre, you’d get a slightly different sound due to the speaker placement in the headphone cup. 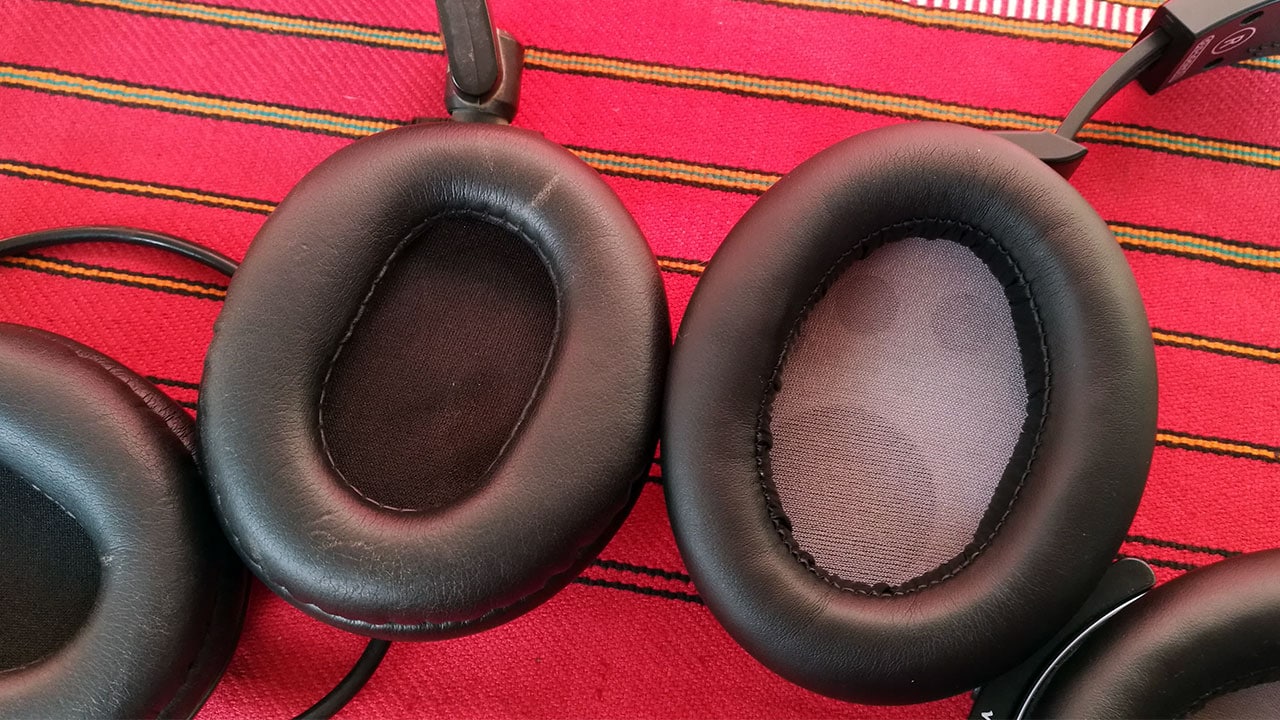 You get a sturdy box, the detachable headphone separate cable with an angled jack and a transportation pouch 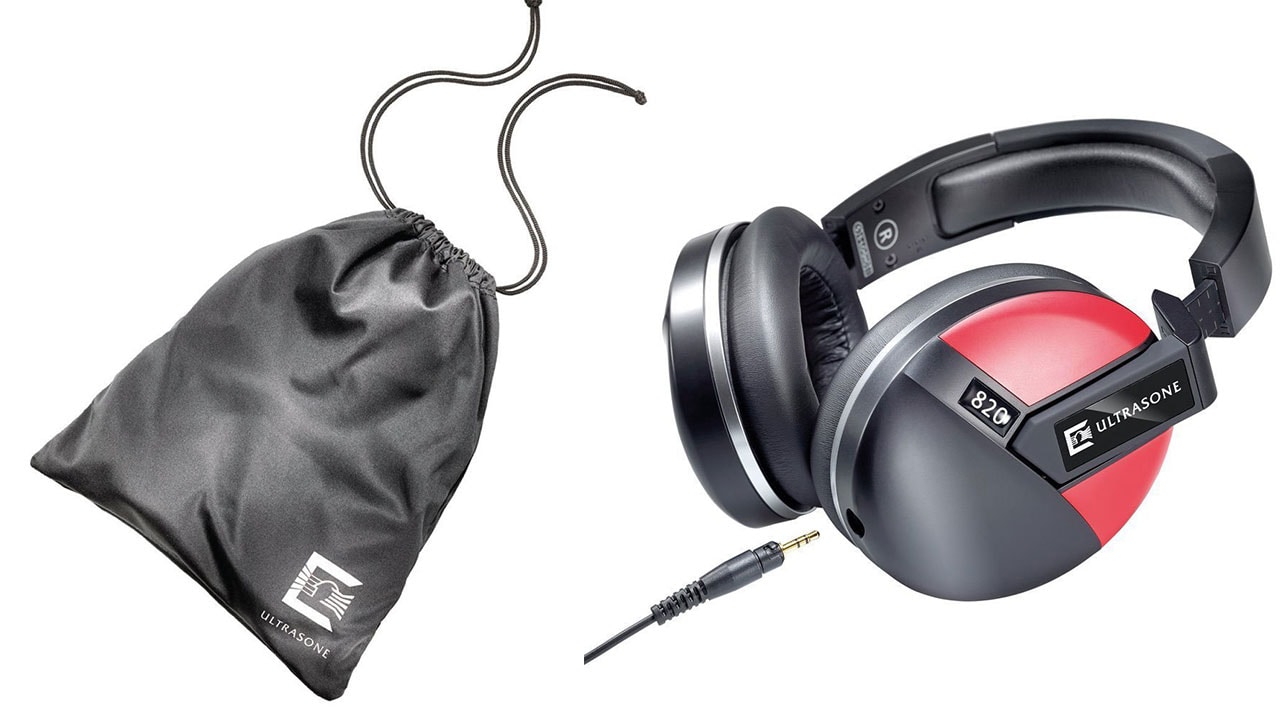 Basic accessories which are more than enough. Image: Ultrasone

The Ultrasone Performance 820 was tested with an Android phone and a Windows PC with FiiO Q1 DAC amp.

These headphones are naturally edged towards bass. This means that the rest of the sounds tend to get over-powered, despite the mids being well present. The highs are fine and non-sibilant but you’ll tend to feel the lack of their presence only due to the over-extenuating bass. While at the same time, the headphones tend to keep clarity in mind and separation of instruments much better than the old venerable Audio Technica M50.

It is not only the bump up in the bass, but you’ll find that the bass doesn’t feel controlled, it is as if the bass spreads itself more than it should. While fast energy music genres like dance, pop, techno, hip-hop you would enjoy, the rest not so much where the bass isn’t what drives the music. That’s where the headphones show the lack of finesse.

S-Logic Plus Technology surprisingly does a good job. You get a better soundstage for closed back headphones, especially much better than Audio Technica M50. The sound doesn’t enter directly into the ears and tends to feel that they are coming from around the headphone.

Subjectively, I don’t like bass heavy sound, that’s the job of the EQ I feel. It isn’t flat sound what I am aiming for, but warm or well-balanced. To listen to music well-balanced I had to tone down the bass in the EQ.

What irked me the most about Ultrasone Performance 820 is the fact that it has the “Performance series” tag to it but yet feels like a non-performance headphone. However, this is the lowest end of the spectrum of the Performance line up. Ultrasone has better more evenly balanced 840, 860 and 880. 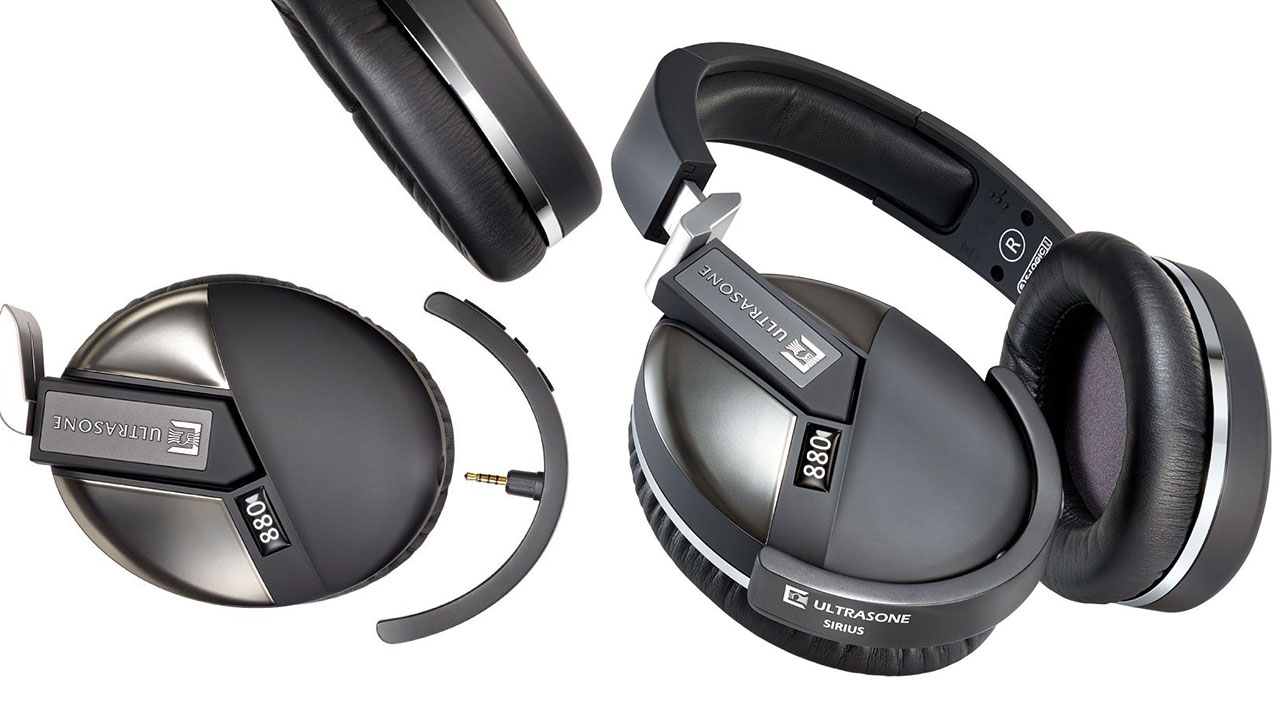 The smart bayonet design easily attaches to the entire line up of Performance series. Image: Ultrasone

The Sirius adaptor seriously looks as if it were inspired by science fiction. Sleek, light and cool and fits the headphone perfectly without any struggle. Though we wonder if after much use, wear and tear, whether it’d come loose as it has no screw type locking mechanism like its headphone cable. 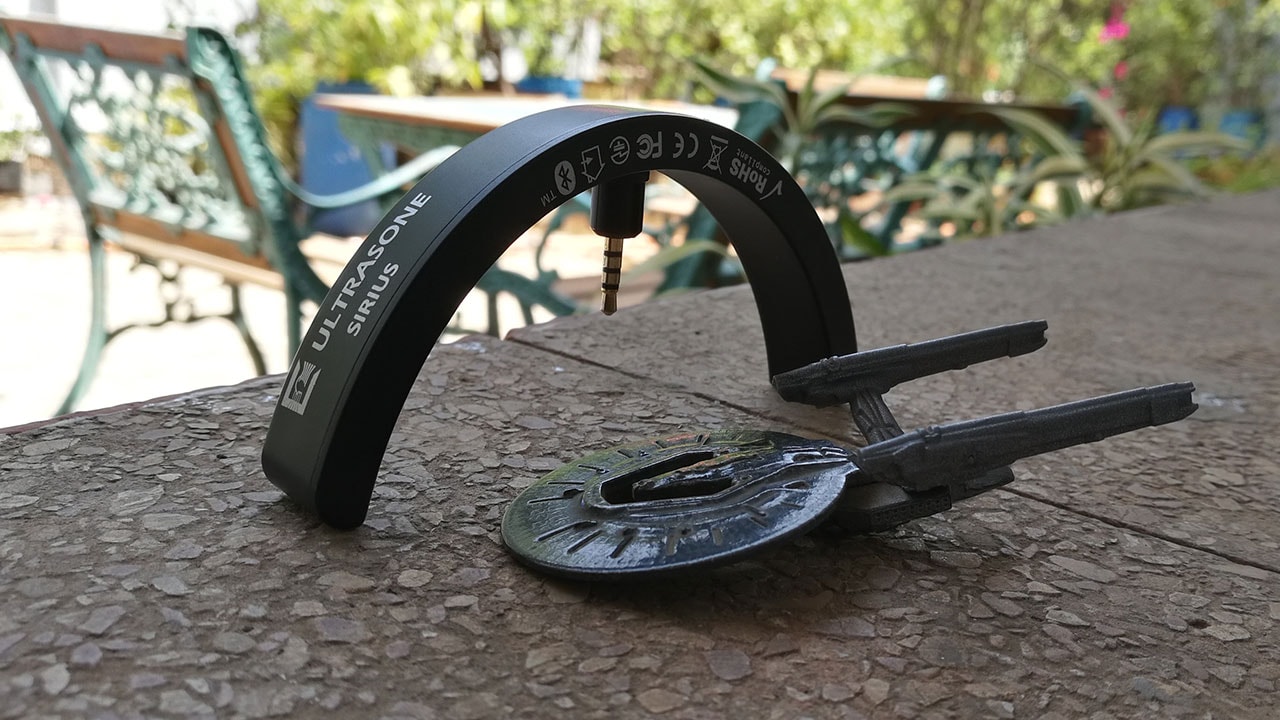 Straight out of Sci-fi Sirius is. Image: tech2/ Nikhil Rastogi

The controls come behind the headphone as reversing it will make the adaptor jut out weirdly while the controls point in the front direction. That also means the mic sits behind the user rather than the front. 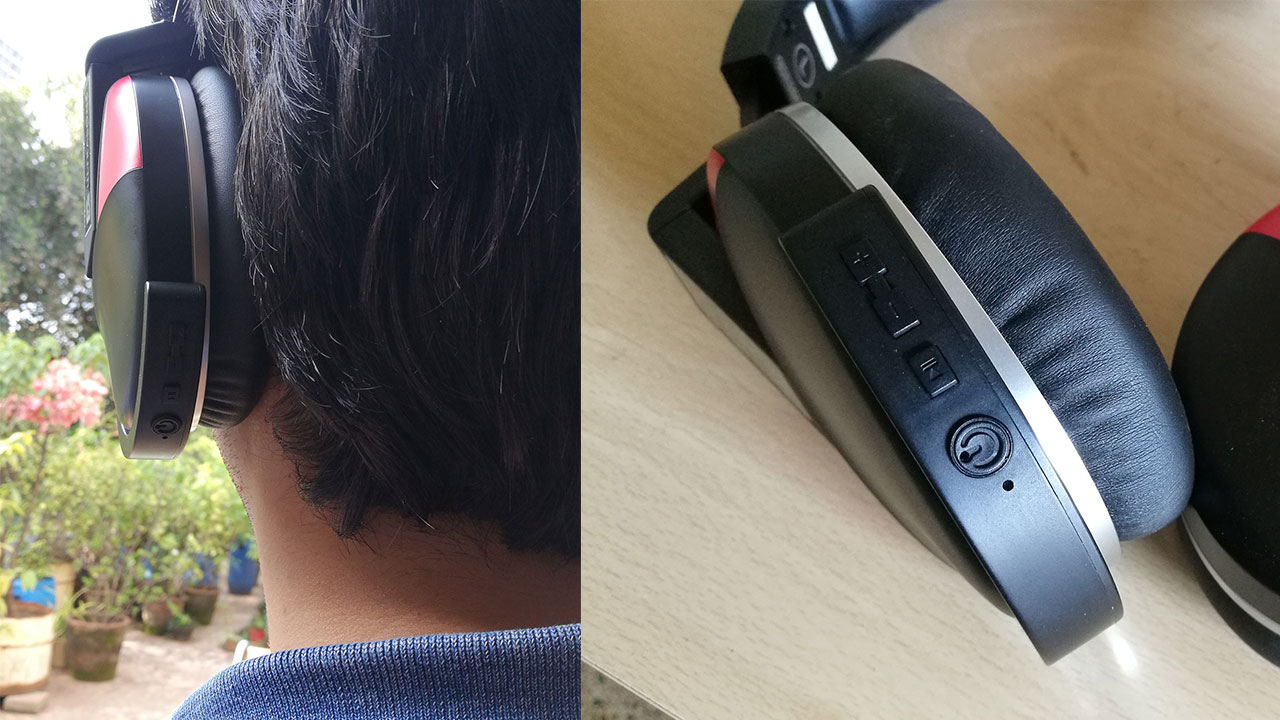 The mic is all the way at the back, not as efficient as it could have been. Image: Ultrasone

The controls are simple, power button, play pause and volume up and down. The buttons are made intelligently so that one can easily distinguish via tactile feel itself. 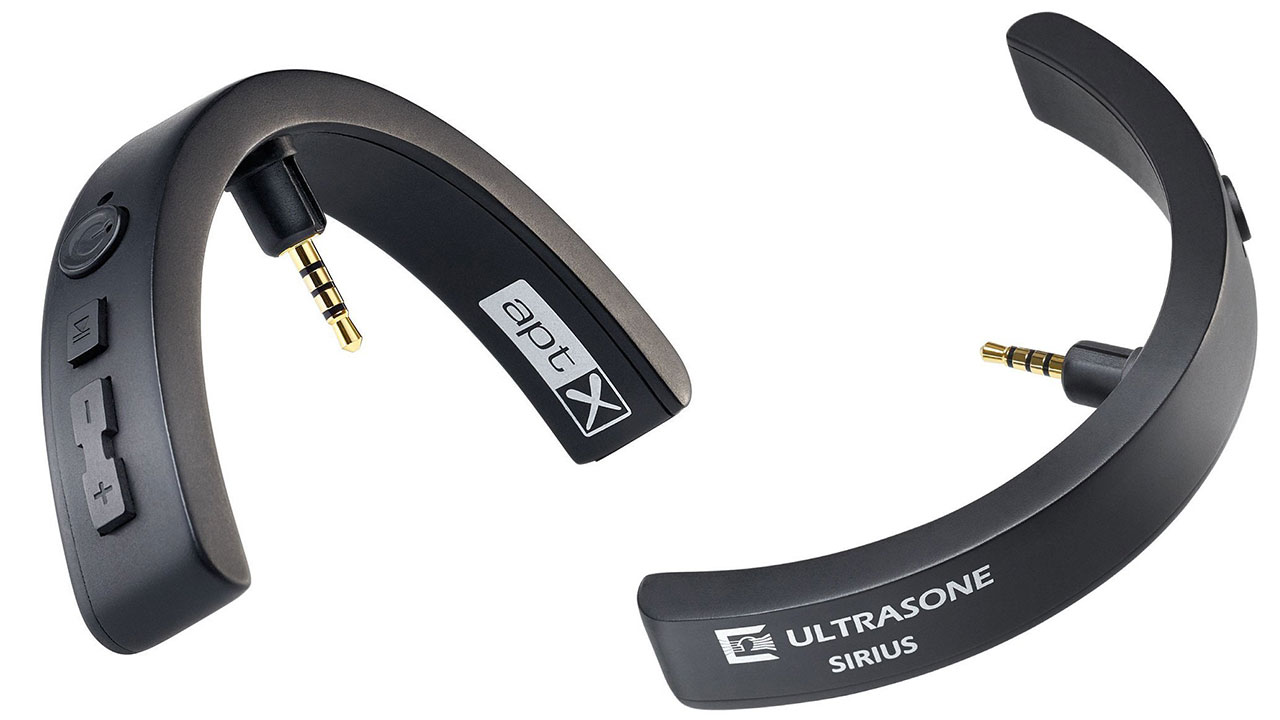 All the controls that one needs. Image: tech2/ Nikhil Rastogi

Sound wise the Ultrasone Performance 820 was practically indistinguishable in wired mode or Bluetooth mode. Nevertheless, the sound felt a wee bit clearer in wired mode than with the Bluetooth module attached where the clarity felt a bit reduced.

The battery takes 1 hour to fully charge and can last about 8 to 12 hrs depending on the volume and usage of the device. The Bluetooth technology is 4.1, aptX and uses HFP, A2DP, HSP, AVRCP profiles while weighing only 12g.

The call quality both wired and Bluetooth is good. The caller at the opposite end didn’t have any complaints in wired mode, however, during Bluetooth operation, the volume and clarity didn’t feel as good as with wired operation. First, Bluetooth generally has these complaints, second, the mic is unusually placed behind on the adaptor next to the controls and not the front, close to the mouth. Therefore expect it to catch whatever sound comes closest to the mic e.g if a person shouts behind.

The cost of Ultrasone P820 is Rs 10,000 available officially from Headphonezone. And comes with a whopping 5-year warranty. WOW, that speaks a lot about the confidence the company has in its engineering.

At this price, you get the Audio Technica M50’s too in India. Both are on the heavier side of Bass, the Ultrasone P820 triumphs the M50’s in overall clarity of sound, soundstage and comfortable fit.

As for the Ultrasone Sirius Bluetooth adaptor. This is indeed a fantastic adaptability to go wireless without changing the headphone which is perfect especially since higher-end smartphones have started to exclude the headphone jack.

From the perspective of P820 owners, it makes no sense at all to go for the wireless adaptor unless you are Sirius(ly) in love with the headphone. You are paying the same amount of cost for the adaptor (Rs 10,000) as you would pay for the headphone itself. However, once you start to go for the higher end in the Ultrasone Performance 840, 860 and the 880 which costs Rs 15,000, Rs 28,000 and Rs 35,000 respectively. The adaptor starts to make sense, albeit a niche product.