The portable speaker looks premium, sounds premium and not surprisingly, is priced at a premium too. It's huge
No pulsating lights

If you have money to spare, there’s very little you will be complaining about the Studio19 E500X-EQ.

When you think of portable Bluetooth speakers, the last thing that comes to mind is thumping bass. The Solo E500X-EQ speaker from Studio19 plans to change that.

The UK-based company claims to use their patented Dual Pressure Air Compression (DPAC) super-bass technology (yes, quite a lungful) that delivers deep bass and immersive 360-degrees optimised sound. Time to put the claims to test. This Studio19 speaker sports a unique design; sort of a mini-tower about two feet tall. We have seen speaker cases made out of wood and plastic, but this one’s made out of solid aluminium. It can easily be mistaken for a fancy bomb from one of those Hollywood flicks. Or maybe it’s just my imagination running wild. Either way, the design is bound to grab attention and in a good way. The actual speakers reside on top of the champagne gold long metal cylinder which is mounted atop a metal stand. The speaker unit has multiple drivers facing in different directions to deliver the aforementioned 360 degrees sound. More on that later. The cylinder is where the DPAC magic happens to deliver thumping bass without the need for a separate subwoofer.

Between the stand and the cylinder is an array of bottom facing white LED lights that make this speaker look even fancier. However, they don’t change colour or groove to the beat. There’s an option to switch them off too in case they are too bright for you or you want to save battery. Speaking of which, the E500X is equipped with a mammoth 8800mAh battery that lasts for about 7 to 8 hours on a single charge. The speaker, though portable, weighs close to 3.5 kg. It’s fairly easy to move it from one room to another, but given its size and weight, it is not something you can toss in your bag and take it around frequently. You can surely take it along for that odd party at your friend’s place and wow the crowd. Avoid pool parties though as the company doesn’t say anything about the speaker being water resistant. This portable speaker looks premium, sounds premium and not surprisingly, it’s priced at a premium too. Image: Tech2/Ameya Dalvi

The E500X-EQ is essentially a Bluetooth speaker system but you also have a 3.5mm Aux input as well as output and an HDMI ARC input. In case your TV supports it, you can also use this speaker as a sound bar, or a sound tower (technically). There’s also a USB Type-C port at the back for charging this device. While the company hasn’t bundled any charger in the package, you can use any type-C phone charger to juice it up.

While this speaker sports a very modern look, there’s a dash of retro right on top. The company has opted for the good old 3-band analogue graphic equalisers to adjust the bass, treble and mids. The volume control is also analogue. The buttons offer just the right amount of resistance and add a touch of class to the overall design. There are four more buttons on top that let you switch inputs, equaliser presets, power on/off and lights on/off.

Connecting the phone to this speaker over Bluetooth was a piece of cake. All you need to do is simply switch on the Bluetooth on your phone or tablet, find this speaker on the list and connect. Of course, you need to set the input mode to Bluetooth on the speaker too. A small piece of advice — keep the volume level on the speaker under 50 percent when you are setting it up for the first time. It can get really loud and catch you off guard. This speaker just doesn’t look like a bomb but sounds like one too. 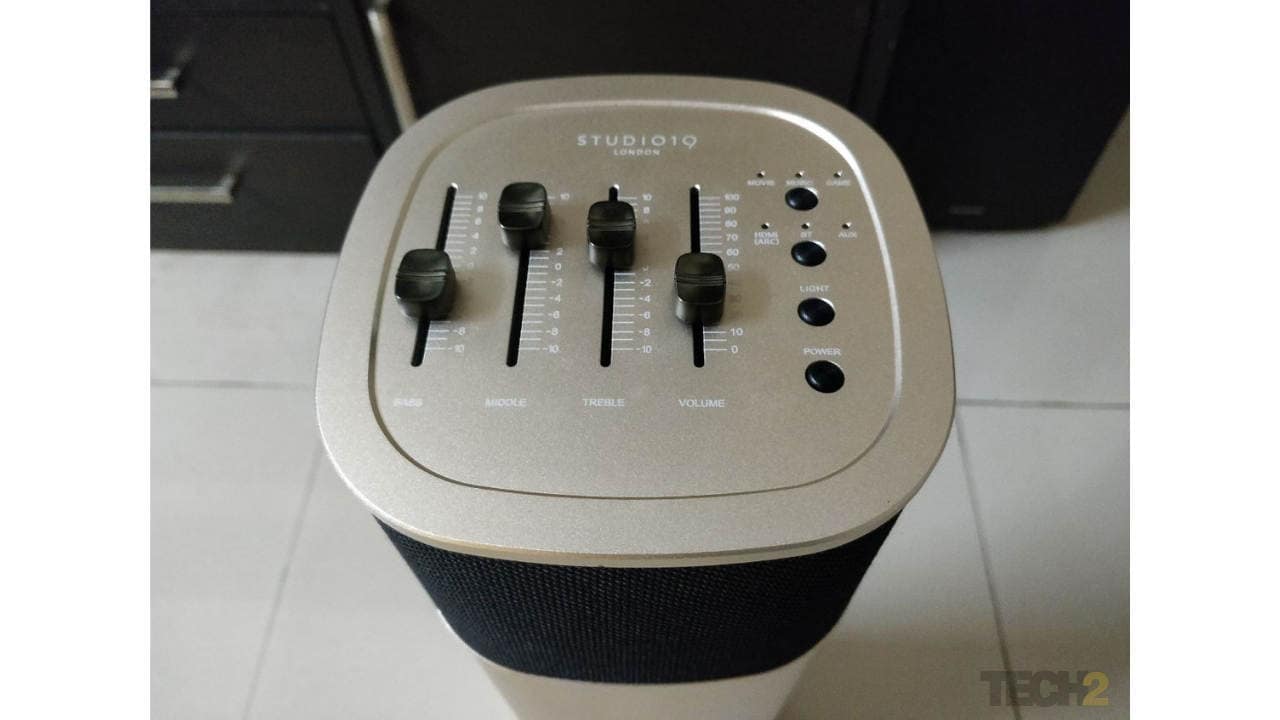 While this speaker sports a very modern look, there’s a dash of retro right on top. Image: Tech2/Ameya Dalvi

The Studio19 Solo E500X-EQ has a rated maximum RMS output power of 200 Watts and more importantly, it feels like that too. It’s not just loud but has a good frequency range as well. The mid-range frequencies are reproduced quite clean and the highs are fairly distinct too. The bass is the striking feature of this speaker system. The patented DPAC technology delivers thumping bass that can really shake your window panes at high volume. And I am not exaggerating! It does as good a job as any standard subwoofer would, but without one. Despite the solid bass, it doesn’t overpower other frequencies and the overall sound feels wholesome and crisp. But ideally, keep the bass level close to 50 percent indoor. Beyond that, it starts to feel a bit excessive.

The company claims that its patented 3D-effect algorithm creates an ‘omnidirectional spread with wide, directional waves that circulate throughout the room, giving the authentic impression of a multi-speaker environment from a single speaker.’ Well, not exactly. While the soundstage is definitely broader than what you would expect from a standalone speaker, it doesn’t exactly replicate that of a multi-speaker system with speakers in different parts of the room. Developer hype notwithstanding, the speaker does fill the room with high-quality sound even if you are seated off centre. I also tried testing the Studio19 Solo E500X-EQ outdoors and it had enough muscle to deliver in an open setting too. Feel free to crank up the bass beyond 50 percent when you are outdoor.

As I mentioned earlier, this speaker system comes with a huge 8800 mAh battery that claims to keep the speaker powered for up to eight hours on a single full charge. During my testing, I could easily get over seven hours of playback from it on Bluetooth. While seven to eight hours may seem a little less for such a high capacity battery for some, let’s not forget this is a 200 Watts RMS speaker that it is powering. So that is a good number. 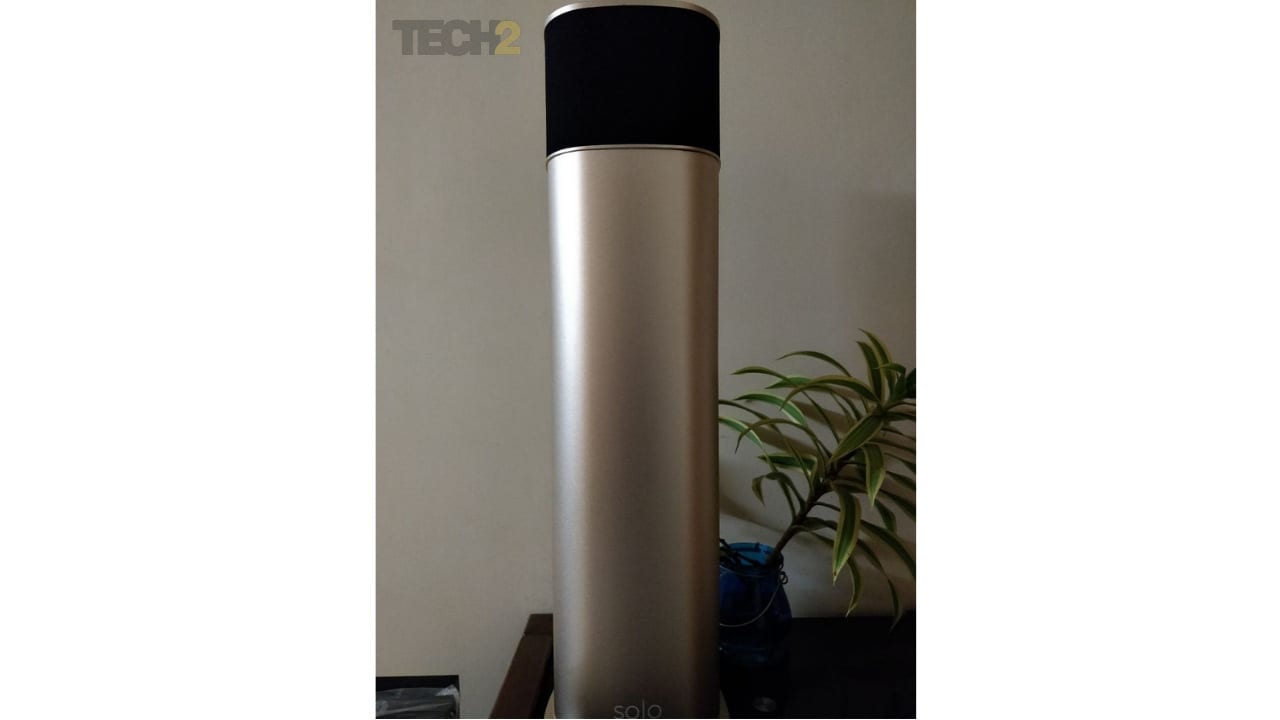 This portable speaker looks premium, sounds premium and not surprisingly, it’s priced at a premium too. Studio19 Solo E500X-EQ can be purchased for Rs 38,900 on Amazon India. While the ideal price should have been close to Rs 30,000 for what it offers, you do get something special for the money you pay for it in terms of sound quality and design.

At that price point, it is only fair to expect some smart features and integration with Google Home or Alexa that’s noticeably lacking here. But other than that, if you have money to spare, there’s very little you will be complaining about the Studio19 E500X-EQ.