If you are looking for a Bluetooth headphone with good sound clarity, active noise cancellation, loads of bass and excellent battery life, the Sony WH-XB900N is a great option

Not too long ago, we reviewed the Audio-Technica ATH-M50xBT (Review) headphones that had a near neutral sound signature. While that type of sound isn’t biased towards any particular range of frequencies and is termed as pure audio, it is not everybody’s cup of tea.

A lot of headphone users prefer more warmth in their sound; in other words — extra bass. That is exactly what Sony’s XB series brings to the table. Today, we have for review the latest from that series, Sony WH-XB900N, a set of wireless headphones that promises a lot more than just extra bass. The Sony WH-XB900N is primarily constructed out of high-quality plastic with a single tone matte finish. My test unit was black. The construction is quite sturdy and the headphones look elegant. Despite being solidly built, they don’t seem all that heavy and weigh around a quarter of a kilo. That’s quite commendable given the fact that it also hosts the active noise cancellation (ANC) circuitry and a battery that lasts around 30 hours on a single charge.

The ear-cups are nicely cushioned and hold a pair of 40 mm drivers along with touch controls on the right ear-cup. The left ear-cup hosts the power on/off switch, Bluetooth pairing button and a toggle for ANC. There’s also a USB Type-C connector for charging and a 3.5 mm jack to plug in the aux cable in case the headphones run out of battery or if you wish to use it with a non-Bluetooth device. A standard USB to Type-C cable and an aux cable are bundled in the package along with a carry pouch.

A metal strip runs through the cushioned, adjustable headband that also bears the Sony logo. Each of the ear-cups can rotate and bend 90 degrees. You can fold them, put them in the bundled pouch and carry them around. Though they aren’t exactly inconspicuous, they don’t take a lot of space in your bag. One of the touch controls can be programmed to bring up the virtual assistant in phones. It is compatible with Siri and Google Assistant both, and even Alexa.

The Sony WH-XB900N fits well on the head without any discomfort. The ear-cups aren’t large enough to go entirely over the ears but the material used for padding is excellent and lend a great degree of comfort. The soft cushions absorb much of the pressure leaving just the right amount on the earlobes to hold the earphones firmly in place and, at the same time, provide a fair degree of noise isolation even if you do not turn on ANC.

They don’t cause much ear fatigue for an hour or two of listening, but your ears tend to get sweaty beyond that. It’s not a bad practice either to give your ears a break every hour or two irrespective of how comfortable the headphones are.

The Sony WH-XB900N supports a wide variety of high-end codecs including Sony’s LDAC and Qualcomm’s aptX HD, both available for Android devices. However, if you choose to pair it with Apple devices, you only get an option of AAC. Thanks to these codecs, the experience of listening to audio over Bluetooth is almost as good as listening to a wired variant. The headphones are NFC enabled for quick pairing.

The headphones support active noise cancellation and also a toggle for switching ambient sounds on and off. To fine-tune the amount of ambient noise that’s let in and a few other directional audio settings, you will need to install the Sony Headphone Connect app. While ANC is a great addition, especially when you are outdoors, it isn’t perfect. It definitely cuts down on the surrounding noise and gives you better isolation, but certain sounds that should have been blocked still manage to seep through. It does a good job of isolating you from the chatter around you but you can still hear a bit of the rattle of a train you are travelling in or the noise of traffic when on the road.

One cool feature about these headphones is you can momentarily disable ANC as well as the audio that’s playing by simply placing your palm on the right ear-cup. This is especially handy when someone wants to speak with you or you wish to listen to an announcement. The moment you take your palm off the ear-cup, ANC and the audio track resume instantaneously. This is smart engineering. Speaking of smart, as I had mentioned earlier, the right ear-cup has touch controls and they too have been smartly implemented.

Moving on to the sound output, Sony mentions 'Overwhelmingly deep bass and clear vocals’ on the WH-XB900N box and they are right on both counts, though the first part seems more like a warning than a brag. But hey, if you are looking to buy a product that has (e)Xtra Bass in its name, you know what you are getting into. I tried different genres of music and most of them sounded good on it. Thankfully, despite the abundance of bass, it is fairly tight and does not completely overshadow other frequencies. The mids are reproduced pretty well with clear vocals. The highs are distinct too. The lower mids do tend to get lost in the enhanced lows, especially in bass heavy tracks. But for most parts, they all coexist quite well with surprisingly good resolved detail in sound. The sound stage is reasonably broad too but don’t expect it to compete with open-back headphones.

Now, the Sony WH-XB900N are by no means audiophile material, nor do they claim to be. Purists are bound to hate it but bassheads will love it. Your decision should depend on where you stand on that scale. If you like loads of bass in your audio, this is a great option. If you like a more neutral sound signature, then don’t bother with this. Something like an Audio-Technica ATH-M50xBT would be a better choice. The frequency separation is top-notch in that one.

Using the Sony WH-XB900N to have long telephonic conversations would not be a top priority for potential buyers. But if you get a call while listening to music, you don’t want to take off the headphones and switch to the phone earpiece to answer it. I am happy to report that you wouldn’t have to do it as the microphone quality is quite good on this headset. Not only could I hear the other person clearly, but I was heard clearly by the person on the line too. While there were absolutely no issues when indoors, the microphones tend to pick a bit of ambient noise when outdoors, though. It isn’t a deal-breaker and doesn’t hamper the conversation in a big way, it is still a minor distraction that could have been avoided. 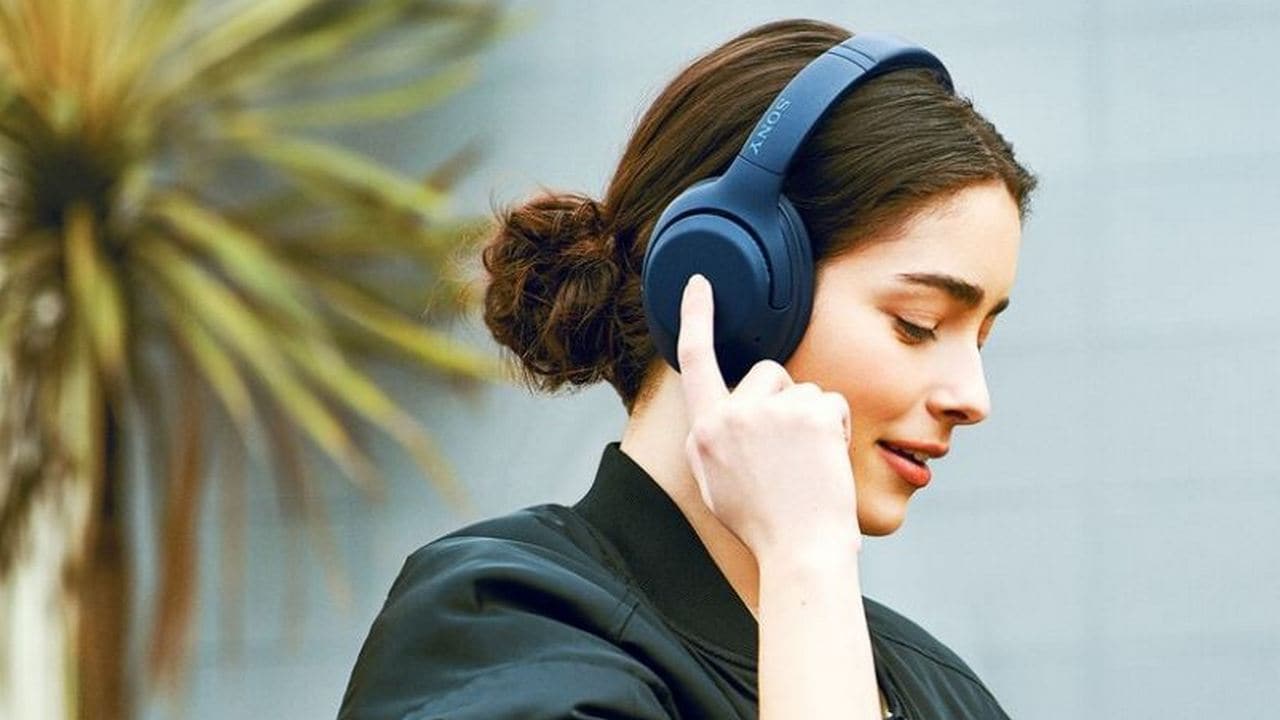 Sony XB900N lets you use gestures on the ear-cups to raise/reduce volume, change tracks. Image: Sony

Sony claims that the WH-XB900N can last for about 30 hours on a full charge. That is quite an ambitious figure for a wireless headphone with ANC. Interestingly, I managed to actually get something very close to that with ANC on 75 percent of the time. At just under three hours of usage per day, I didn’t have to go looking for a charger for a good 10 days. That’s close to 30 hours of usage. And with ANC off, I could have probably squeezed a couple more hours out of it. These are excellent figures.

The company claims that it takes about 7 hours to charge fully. I happened to use a fast charger with it and I could charge it fully a lot quicker in about four and a half hours. If you don’t have a fast charger, simply charge it overnight and you are set for a few days. In case it runs out of juice at the wrong time and you need it back in action almost immediately, you can charge it for 10 minutes and continue using it for another hour or so. That’s quite handy.

The Sony WH-XB900N is priced at Rs 16,990 with a one year warranty but can be purchased close to Rs 15,490 online. If you are looking for a set of wireless headphones with good sound clarity, active noise cancellation, loads of bass and excellent battery life, the Sony WH-XB900N is a great option. The smart touch controls add further to the cool quotient of the device.

However, as I mentioned earlier, if you like a more neutral sound with a hint of extra bass, then something like an Audio-Technica ATH-M50xBT will serve you much better. That too has great battery life.

Audio-Technica ATH-M50xBT Wireless Headphones Review: Sound clarity above all else