The audience is clearly those who want a “party speaker”, i.e. someone who wants more than just a speaker with good sound. Sony is a household brand; they are into everything including audio from low-end to the high-end studio equipment. With their recent launch of Bluetooth players, Sony’s top-end SRS-XB41 wireless Bluetooth player came into our labs. Portable Bluetooth speakers have become a necessity now, especially ones which can be used at house parties. The Sony SRS XB41 comes with blingy lights around the speakers, so let's see how it fares in our tests.

The Sony SRS-XB41 is large and bulky for a Bluetooth speaker. It isn’t a speaker you will carry along with you nor in the hand as the marketing touts. It is 1.5 kg dead weight centre speaker with not much of (convenient) grip/handle to make it easier to lug along. 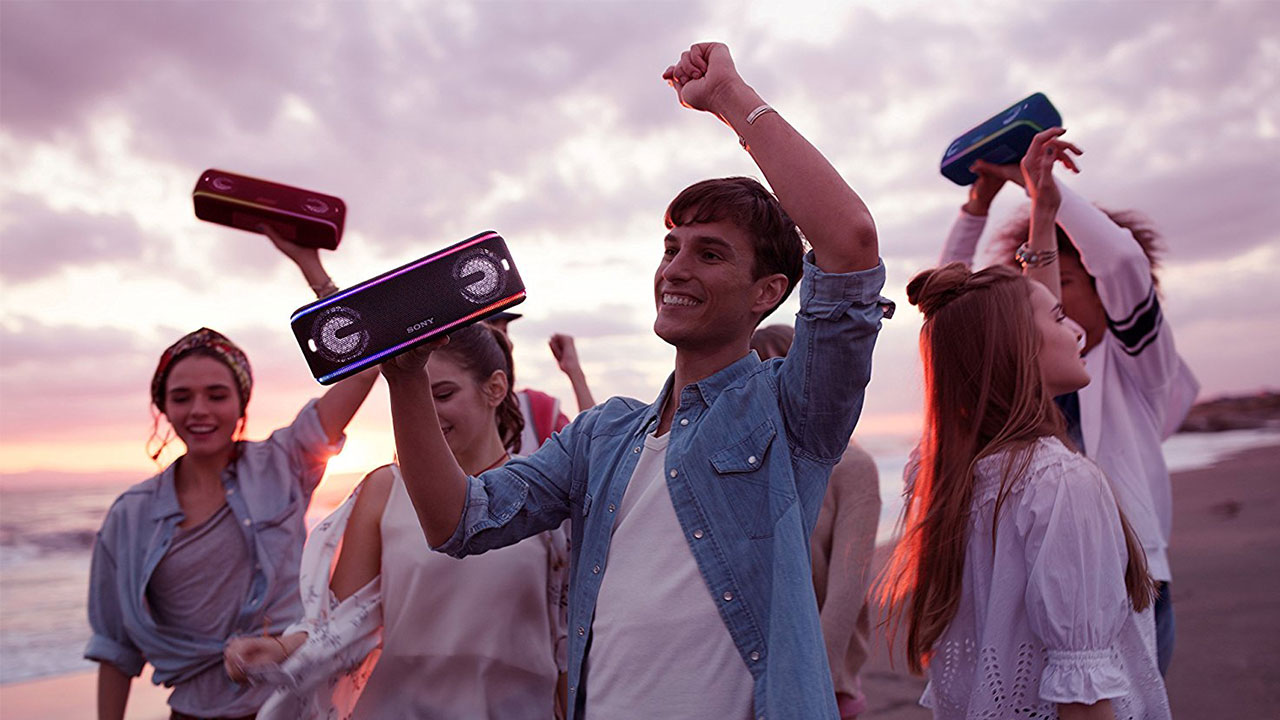 That’s not how you would use this speaker at all

When you see the features, you’ll realise why the XB41 is this bulky and built like a tank. Sony being Sony, loves to add a surprising amount of features which you’d least expect such as 58mm mica re-enforced cone drivers which are quite large for a Bluetooth speaker, three sets of funky lights packed inside which are controllable via an app and IP67 certified meaning it is dustproof, waterproof, washproof and shockproof (of course with applicable caveats). Lots of interesting things this player can do

The most fun feature of the SRS-XB41 player. The lights are well thought out and executed equally well. You have three sets of lights, one being the line light around the edges of the speaker that can change to any spectrum of colour as per your liking via the Sony (Songpal) app, left and right speaker light which syncs to the bass of the music and flashing strobes on either side which adds a nice touch to the entire show.

This feature is something you’d completely miss if you didn’t pay attention to the marketing. It is another fun feature wherein the speaker would make drum noises when struck at different points on the speaker. You can select what sort of percussion you can want via the Fiestable app. See the Sony marketing demonstration video below to get an idea.

Talkative but not loud

The XB41 has a helpful voice which tells/warns you when the battery is too low, however, she says this as a whisper rather than at a clearer volume. While most Bluetooth speaker voices are irritatingly loud, this speaker's voice is quite oppositely low. So much so that I could only hear the voice when I put my ear close to the speaker. Speak up my dear, you are a speaker after all!

Sony has put in a lot of features, though not all of them are that useful. The Live sound mode when switched on has a better throw but is almost completely devoid of bass. Perhaps this is an ideal mode for open spaces without walls such as the beach but it certainly doesn’t make the music sound nice, with the mode on it sounds noisy and screechy. It may be Live, but it isn’t Alive

The speaker design is well made with a rubber embedded panel controls, NFC, while at the back a 3.5mm jack, a USB charging port to charge your smartphone, and the incredible ability to chain up to a 100 XB41 speakers (although costing you a pretty penny). 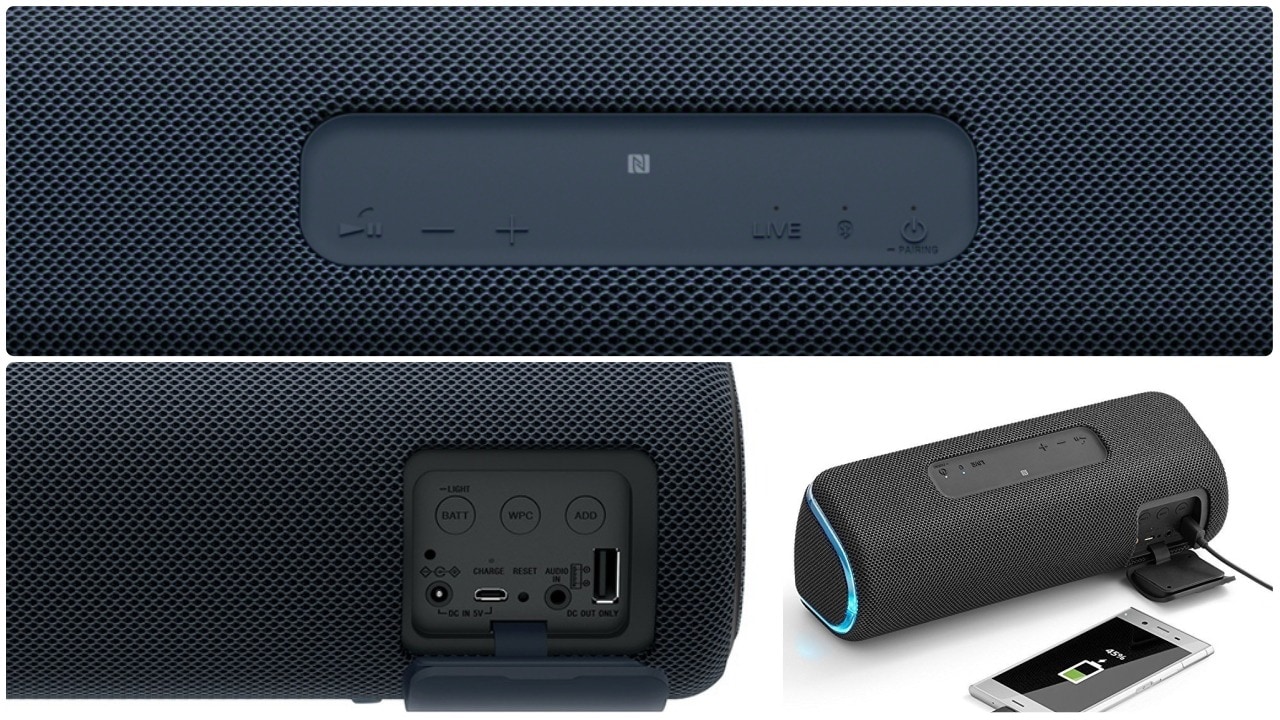 Nifty features for the outdoor party

The Sony SRS-XB41 was tested with an Android phone and a Windows PC with FiiO Q1 DAC amp.

Sony’s SRS-XB41 are bass heavy and sound quite muffled actually. The initial sound will not be as appealing until one uses the EQ to tighten the bass and push the highs up to give clear sound. The mids are strong and whole, it is the lower bass that the speaker's lack (true of all portable Bluetooth speakers).

From a personal perspective, the sound was enjoyable overall, everyone at home enjoyed listening to the speaker. The speaker does pack quite a punch for its size and can get quite loud without breaking a sweat. While the deep low-end bass lacks, the XB41 still did quite a commendable job of pushing bass where it was needed.

The sound and shape of these speakers resemble the centre channel speaker of a 5.1 speaker system. It’s almost as if Sony picked up their centre speaker which is used primarily for voice and pushed Bluetooth tech in it. The battery lasts sufficiently long, expect to get easily 12 hrs life from the music playback depending of course on the volume, standard mode with lights on. Sony claims 24 hrs with lights off and in standard mode.

Call quality is average. There aren’t any major issues, just the typical Bluetooth speaker tech problems such as distant hollow sound with slight echo for the caller on the opposite side. From my perspective, the call sounded typically like how it sounds from a telephone and not a rounded sound. This is dependent quite a bit on the network rather than the speaker alone.

So, who is the Sony SRS-XB41 speaker for? The audience is clearly those who want a “party speaker”, i.e. someone who wants more than just a speaker with good sound. The features are aimed to be fun and can be completely turned off if and when required.

My folks at home liked the speaker but didn’t want the lighting constantly attracting attention nor were willing to pay the price for it. They clearly aren’t the audience for this, if you are like them and want a good speaker without the frills and at a lesser price, perhaps the JBL Flip 4 (see review) would suit you well.