When Sony offered to send me the V50D, I wasn’t particularly keen on it, but when I tried it, I discovered a speaker unlike any that I'd previously tested As someone who loves audio and is willing to go the extra mile to fine-tune his aural experience, I go out of my way to avoid products like the Sony MHC-V50D. Without even auditioning it, it’s biggest sin was the fact that it’s a single tower speaker. As any audiophile will tell you, stereo speakers are the way to go.

When Sony offered to send me the V50D, I wasn’t particularly keen on it, but since I’d never experienced one of these single speaker units first hand, I thought it would be worth checking out, if for no other reason than to confirm my suspicions.

I am so very glad I did decide to check it out because the V50D was, in a word, spectacular. It is, however, a speaker for a more limited audience than the average audiophile.

For a speaker that’s a little over 2.5 feet tall, the V50D isn’t particularly heavy, though it does feel solid. The audio is pumped out by a total of five drivers, which include 2x 4 cm cone tweeters, 2x 8 cm cone mid-range drivers and 1x 20 cm Mica woofer. The tweeters and mid-rangers are angled outwards, probably with the intention of creating a stereo effect of sorts. More on this later.

The entire upper surface is given over a control console and display and the upper rear portion hosts all the I/O ports.

A large bass vent is at the bottom and all the drivers, except the tweeters, are protected by a metallic mesh.

The device sits squat on the ground and is very stable.

When it comes to features, this device is packed to the brim with everything you’ll need. The device can play back audio from CD, DVD, DVD DL, it supports NFC for pairing, multiple Bluetooth standards including LDAC, AAC, A2DP, AVRCP and SPP, an analogue input, a composite video out, an analogue audio output, an HDMI output, a USB port and two microphone inputs, including one for guitar. Even FM radio is supported. You can also daisy-chain multiple speakers for enhanced audio. The speaker incorporates almost every input you'd ever need

Other fancy features include a karaoke mode, equalisers, video equalisers, bass boost, sound enhancements, flanger and isolator modes and much more. The entire list of features is too long to dive into, so simply head to Sony’s product page if you want to learn more.

Supported audio formats include MP3, AAC, WMA and WAV and supported video codecs include Xvid and MPEG4 up to 720x576.

You also get some weird, epilepsy-inducing, responsive LED lighting modes that were so horrifying that I left them off. If you’re into karaoke and parties and the like, this LED lighting might serve to enhance the atmosphere, but they didn't sit well with me.

I’ve made my initial trepidation quite clear, and I simply wasn’t prepared to be blown away by the audio quality of this thing. For testing, I didn’t bother with digging out my CD collection from wherever it's buried. I simply fired up Tidal (with a subscription for the highest quality, lossless playback option) and started streaming the audio to the device. The speaker supports some very fancy Bluetooth modes, after all.

I started with Mark Knoffler’s Dire Straits album and settled down for what I thought would be a sub-par experience.

What I didn’t expect was that I’d spend the next several hours sitting in front of the speakers with my eyes shut and a silly little smile plastered over my face. The music that emanated from that single speaker filled the house, and it was good. Mark Knoffler’s guitar work is incredible and the speaker rendered the notes beautifully. Every track I played sounded amazing on the speaker. Whether it was the hauntingly beautiful voice of Sarah Brightman or Kelly Flint’s dulcet tones, everything sounded incredible and detailed.

Heavier tracks are where the shortcomings of the speaker become apparent. Tracks like Pink Floyd’s High Hopes and Metallica’s The God that failed, just don’t have enough meat on them. The audio is room-filling, yes, but the punch from the bass is lacking and stereo separation just doesn’t happen.

The angled tweeter and midrange cones help in spreading the audio around the house/room, but they just can’t replicate a stereo image as well as stereo speakers.

Tracks with heavy vocals and guitar solos sound amazing because they can sound amazing without needing much stereo separation. Other genres do not sound that good.

Don’t get me wrong, I loved this speaker: I just wish there were two of them.

Also, don’t even bother playing back low bit-rate MP3 files on this speaker, it’s good enough to render all their flaws.

A note on placement 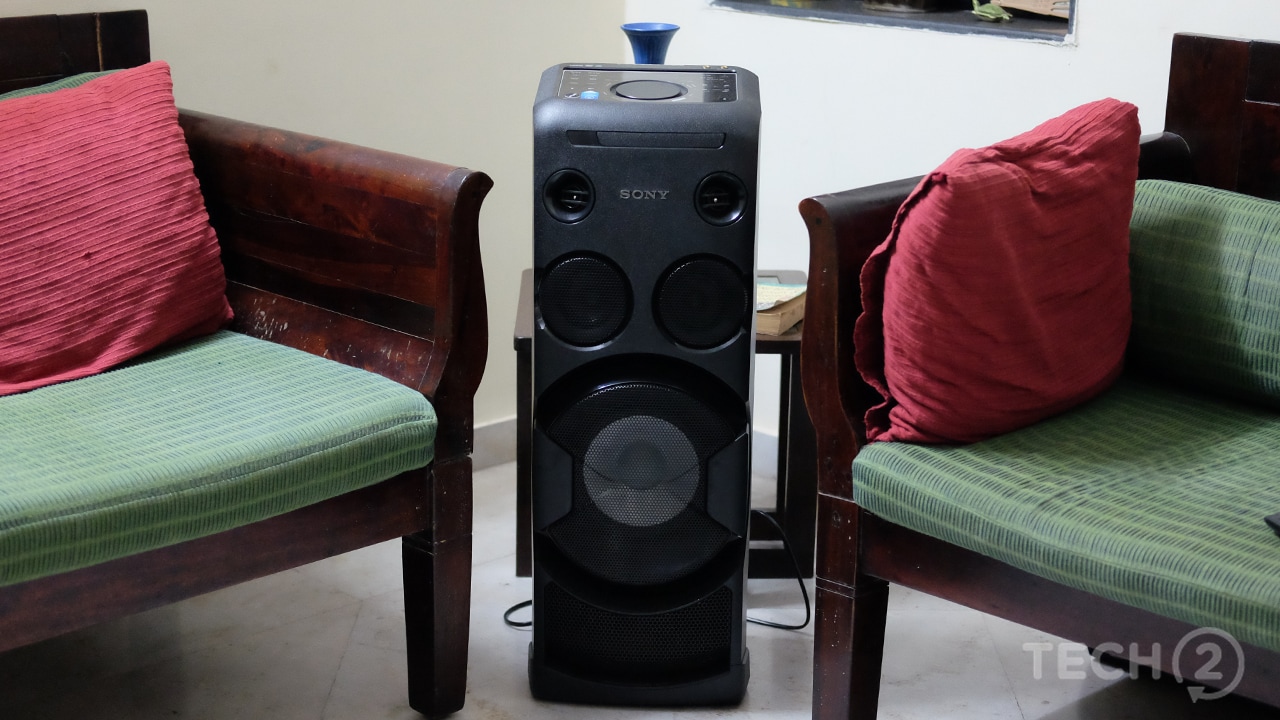 The speaker's design means that it's best placed in a corner

Being a single speaker with drivers firing out at an angle, this speaker is best placed in a corner of your house. Placing it anywhere else just doesn’t work. When I placed the speaker beside my TV, 30 minutes of listening left me with the feeling that precisely one of my eardrums had worn out.

The Sony MHC-V50D is a superlative performer. Its design is limiting in that it’s a single speaker, but the device can truly shine in the right environment, and I can see it nestled snugly in a bedroom, studio apartment or small flat. The party features should also be great for those so inclined, but I honestly feel that it would be a waste of an incredible piece of hardware.

To put the performance in perspective, I’m running a pair of custom-built 150 W RMS tower speakers that are powered by a Yamaha stereo amp. This setup gets its audio directly from the TV as well as an AudioQuest DragonFly DAC. The entire setup cost me upwards of Rs 80,000. This Rs 33,000 Sony speaker is competitive with that, and less of a hassle to setup as well, that’s how good it is.

For true audiophiles, stereo is stereo and the V50D just can’t compete. For everyone else, the V50D can be a very capable option.

The only thing holding me back from recommending this speaker to all and sundry is that Apple's HomePod and Google Home Max are just around the corner.

In Hawking Hawking, author Charles Seife presents a humanising portrait of the celebrated physicist, his love of the limelight