The Samsung Galaxy Tab S5e offers the right balance of hardware and features at the right price. A practical and premium Android tablet

I received the Wi-Fi + LTE version of the tablet that is priced at Rs 39,999 along with the Book Cover Keyboard priced at Rs 7,999. While I’m not usually impressed with Android tablets but the Tab S5e feels different, fun and for some reason useful. And part of this is because Samsung also sent across the Book Keyboard Cover that checks the hardware requirements for DeX making it more productive than a regular tablet. But even without the Book Keyboard accessory (which I would recommend), the Tab S5e is a fine Android tablet and here's why.

Thinner than a OnePlus 7 Pro and only twice as heavy

Indeed, the Galaxy Tab S5e is one of the thinnest tablets you can find on the market today. It’s not like the Android tablet market in India is flooded with options, but it’s good to see Samsung come up with a decently priced (I'll get to this later) option that has been designed so well. At just 5.5 mm it’s easily thinner than the OnePlus 7 Pro and weighs twice as much at 400 grams (without the Book Cover Keyboard). To give you a better idea about how thin this Android tablet really is, just find the Type-C charging port on your smartphone, the body of the Tab S5e is barely a millimetre thicker on either side of standard Type-C port.

So it’s light and thin, and this combined with the cold aluminium body, makes it feel really premium as well. 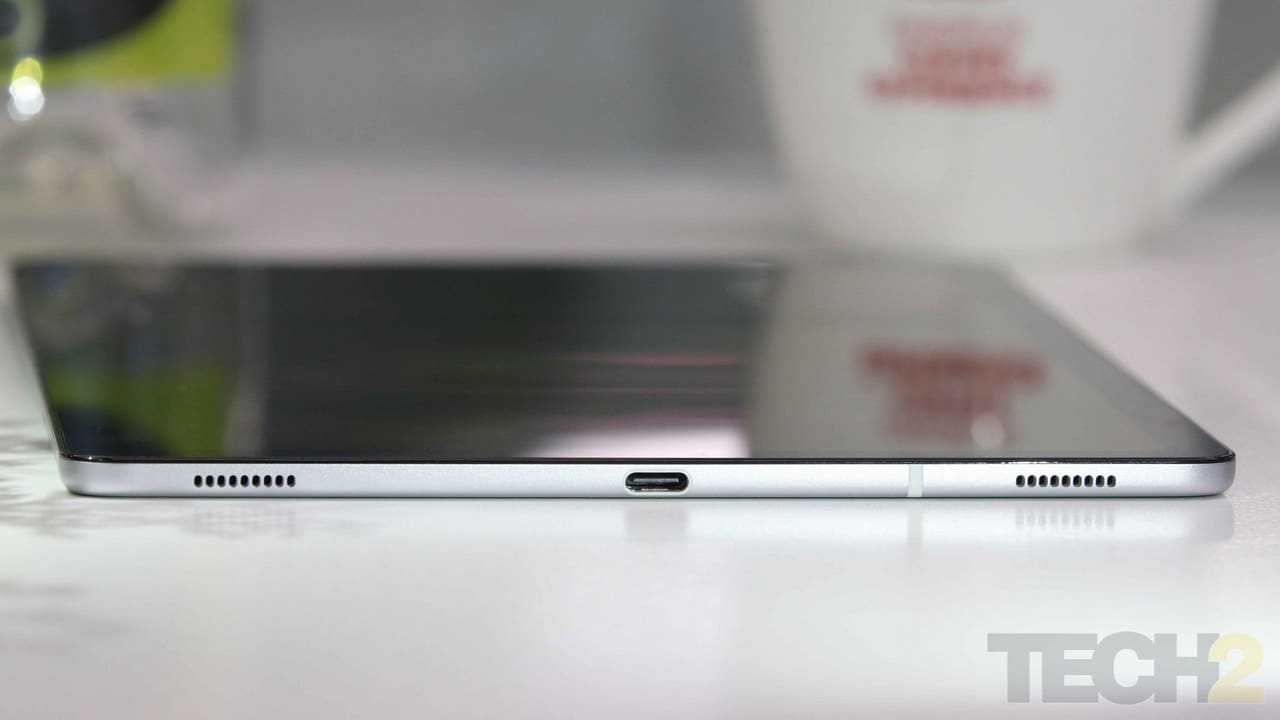 The 4 AKG-tuned speakers (two on either side of the display) sound fantastic. Image: Tech2/ Omkar P

Despite its super-slim waistline, Samsung managed to fit in four AKG-tuned speakers in there as well. And these are loud enough to fill a room and were good enough for me to stream my usual Netflix shows without any headphones plugged in.

Oh, and since it is so thin, there’s no room for a regular 3.5 mm headphone jack. But since the speakers are pretty loud and clear, and Samsung adds a 3.5 mm adapter in the box, I'll forgive them for not including it (even if it's physically impossible to include one). The fingerprint reader is fast but the thin edge of the tablet makes it hard to find. Image: Tech2/ Omkar P

On a tablet this slim, there’s really no room left for a fingerprint reader, but Samsung’s engineers managed to squeeze one on the right side (when held vertically) which also doubles up as the power button. It’s quite fast and I’m glad Samsung did not go with an in-display solution, which would have not only made the tablet thicker but more expensive as well. The camera protrudes but by a very little. Image: Tech2/ Omkar P

The only protrusion on the otherwise slim and sexy body is the rear camera that pops up by about 2 mm.

While everything seems to be in place, my only gripe after a day of use is finding that fingerprint reader. It fits almost flush with the sides of the tablet. The only indicator to find it is the volume key. And more than once, I did end up placing my finger incorrectly which did not unlock the device. Hopefully, I get used to this. Else, I can always unlock the device using the not-so-secure face unlock with the front-facing camera. The Book Keyboard Cover is a must buy and is built well. Image: Tech2/ Omkar P

The Book Cover Keyboard is a fantastic piece of hardware and a must-buy accessory for those who are looking to buy this tablet. Apart from getting you great QWERTY physical keyboard (which comes in handy for DEX) the keyboard also doubles up as a cover. The keys are a lot better than the ones on the Apple iPad Pro keyboard, in the sense that it offers better key travel and more importantly do not touch the display when closed, which often ends up damaging the displays already delicate oleophobic coating like on every other iPad I have used so far.

A vibrant display with one problem 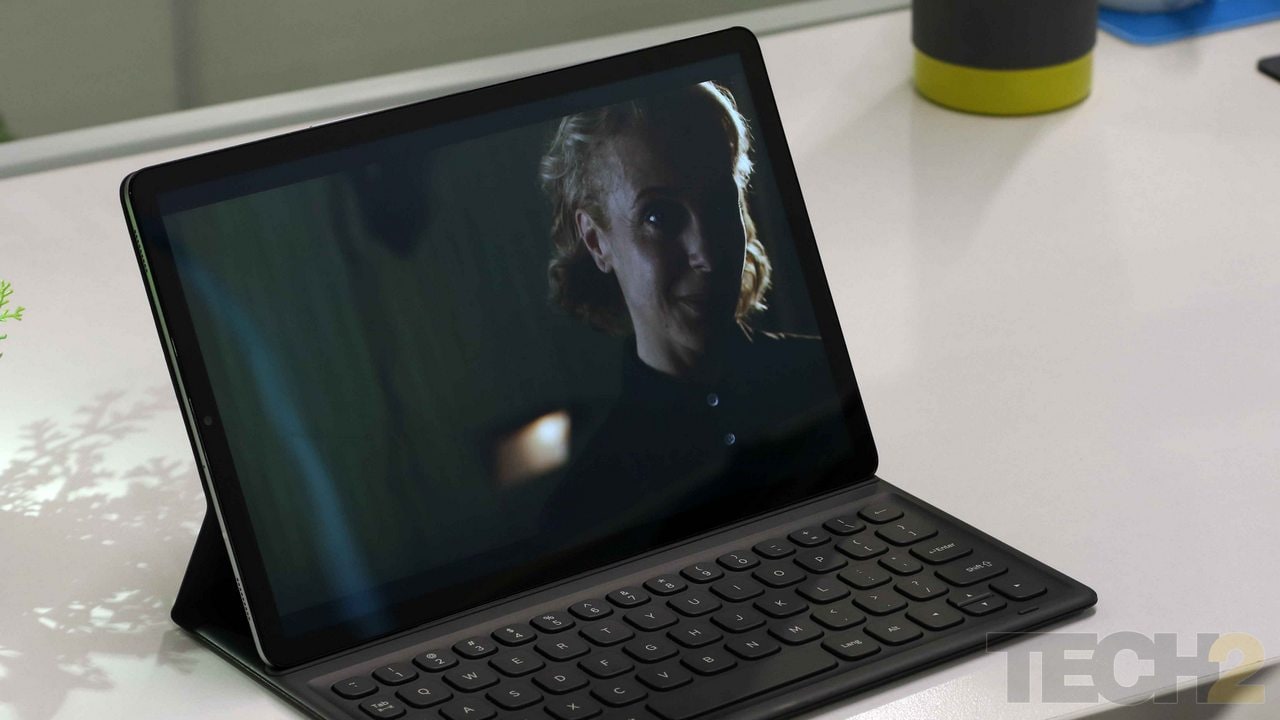 Given the 2K resolution, it made for a great movie streaming experience, especially when accompanied by the 4x AKG-tuned speakers. I preferred the AMOLED Cinema display mode as the display did go overboard with colour saturation in the standard Adaptive AMOLED display settings. The Adaptive AMOLED mode delivers the best whites.

Since the Play Store really lacks well-optimised tablet apps, the main purpose for most Android tablets these days is for watching movies. And Samsung somehow nails this experience and impresses at first glance. There is a noticeable jelly effect when the display is viewed vertically. Image: Tech2/ Omkar P

However, when held vertically (or in Portrait) I did notice the jelly effect while scrolling through apps like Instagram, Outlook, YouTube and YouTube Music. It indeed does not take a trained eye to notice it and it could be nausea-inducing for some. While I get that most will use this tablet to consume video content horizontally, there are plenty of apps like Instagram that don’t work in the horizontal mode.

What I also missed on this device is the lack of HDR10 support. If OnePlus can offer HDR support on the 7 Pro, I’m pretty sure Samsung could have figured out a way because it makes a big difference on such a large display.

Performance that’s not geared for gaming

As I pointed out earlier, most Android tablets today are built to entertain (watching movies), and the Tab S5e manages to do that well. Samsung claims a good 14 hours of video viewing and the Qualcomm Snapdragon 670 SoC clocked at 2 GHz was power-efficient and good enough for that task. It’s also good enough for multi-tasking and running the usual apps like WhatsApp, Evernote, Outlook and even Chrome. But it takes quite a beating with gaming. I tried running Asphalt 8 Xtreme and the game struggled quite a bit, not being able to deliver a smooth gaming experience even at the lowest (Performance) setting. Next up, I quickly tried out PUBG Mobile and the tablet managed to run the game at HD graphics and high frame rate without getting too hot or slowing down. Indeed, gaming is a wee bit of a problem, but since the product has only recently launched, it could be down to developer optimisations and maybe that meagre 4 GB RAM. 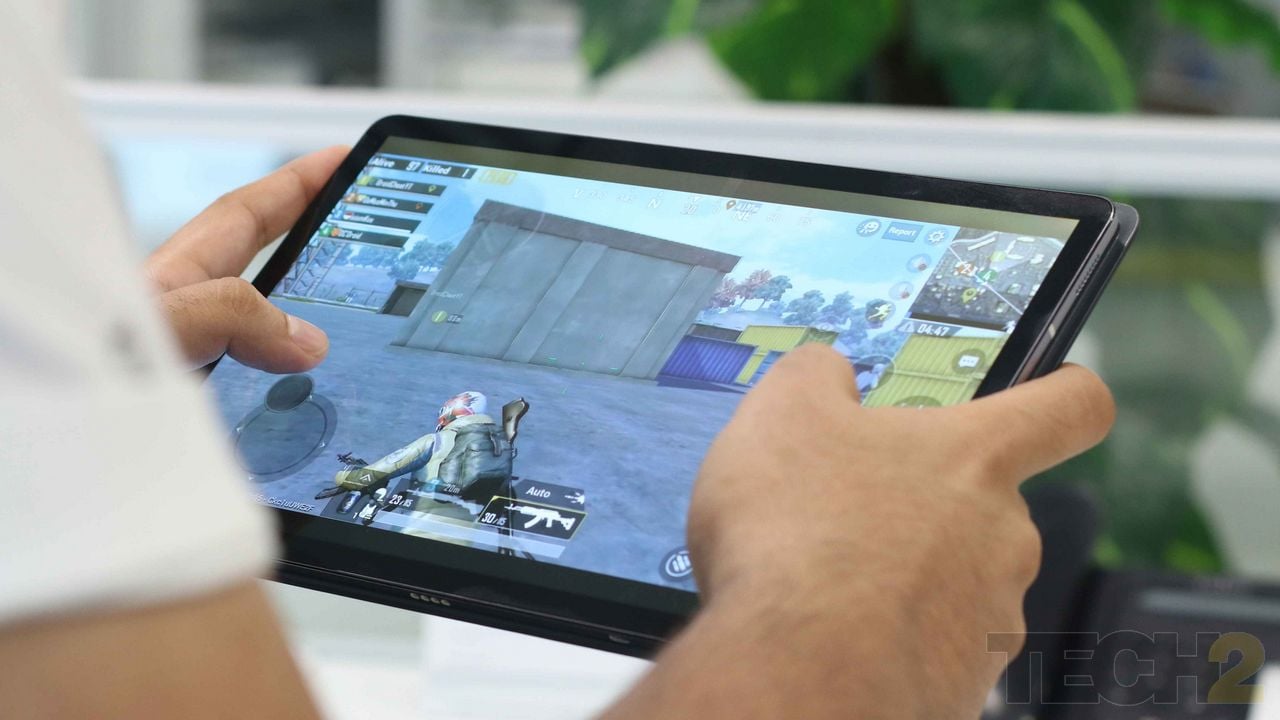 The gaming experience with the Tab S5e is not the best, given its sticker price. Image: Tech2/ Omkar P

Talking about RAM, it seems less than adequate given that most smartphones out there offer 6 GB and 8 GB in this price range. While most of the OS feels fluid there are a few micro stutters from time to time. Still, it's impressive how well this tablet has been optimised to run on 4 GB RAM.

What is impressive is the sound and this makes it ideal for viewing videos without any headphones plugged in. Indeed, it is surprising as to how Samsung’s engineers managed to squeeze in so much power into something this thin.

DeX for work and One UI for play This is the ultimate DeX machine (mouse and keyboard not included) and it surprisingly holds up given the paltry 4 GB RAM. Image: Tech2/ Omkar P

While OneUI is well-designed for a mobile interface, Samsung’s DeX is better suited for more productive work. I ended up spending more time using the DeX mode which almost felt like using a desktop, especially when you have a Bluetooth mouse around (like the Logitech MX Master 2S). And it gets really handy instead of using the regular Android split-screen interface, which feels a bit fidgety as compared to Apple’s iOS 12 iPad interface or even iPadOS. With the Book Keyboard Cover and a Bluetooth mouse, it felt like the best portable DeX experience ever. There's a neat taskbar that display open apps, the typical Android navigation buttons, toggles and the time. All the elements of the DeX interface feel quite natural coming from Windows desktop and most of the apps in windows can be resized to your needs as well.

Most of us today would not really end up holding up a tablet to click a photo, but I tried a few nonetheless. The Tab S5e features a 13 MP camera at the back and an 8 MP camera on the front for selfie. The results using the primary camera were not too far from what I had expected but were pretty much usable for social media.

You can check out some camera samples shot on the Galaxy Tab S5e in the gallery below or click here to head to the Flickr album. Video was a bit too jerky whether I shot at FHD (30 fps) or 4K (30 fps). The selfie camera showcased some decent HDR shooting saving the background from getting overexposed. The device is also surprisingly capable of shooting Portrait photos with good bokeh, but average edge detection.

In a tablet as thin as the Tab S5e, it’s impressive to see how Samsung managed to squeeze in a 7,040 mAh battery. It gave me about 6-7 hours of screen on time and easily got me through a work day of use. Using it on and off, it can easily last two days or more. Charging speeds are decent (for a tablet) with Samsung offering a 14 W fast-charger in the box.

A reasonably priced premium Android tablet with no real competition

The Samsung Galaxy Tab S5e is a well-designed tablet that packs great hardware given its pricing. My only gripe is the shortage of RAM and the lack of HDR10 support with the otherwise gorgeous display.

The Galaxy Tab S5e is not an affordable 11-inch iPad Pro (64 GB LTE+Wi-Fi at Rs 85,000 onwards) and it does not come with rich Pencil support with an app ecosystem to go with either. The Samsung Galaxy Tab S5e is a good balance of hardware and features, given its pricing.

But at Rs 39,999 for the Wi-Fi + LTE model, it’s indeed hard to pick anything else in this price range. There’s nothing better available for Android users. On the iOS (now iPadOS) side of things, the best you can get is the new 9.7-inch iPad (at Rs 37,000) with a rather powerful chipset inside. But with only a paltry 32 GB of internal storage (the LTE model) sounds a bit expensive given its price and its display.

Samsung’s chosen it hardware wisely, you get 10.5-inch WQXGA Super AMOLED display, clear sound with the AKG speakers, 64 GB of storage (expandable to 512 GB) and the flexibility of DeX, which makes it almost as useful as a desktop when needed (Book Cover Keyboard is a must + a Bluetooth mouse is a good addition). It may fall a bit short on the processing power with a 670 SoC and 4 GB RAM, but it chugs along fine for most day to day tasks and casual games. In short, there's really nothing like it in the market at this price point. This makes it a great tablet option to go in for if you have a spare Rs 39,999 to splurge on a device with a bigger display, which will mainly be used for watching Netflix and if you buy the keyboard, some office work and internet browsing as well.